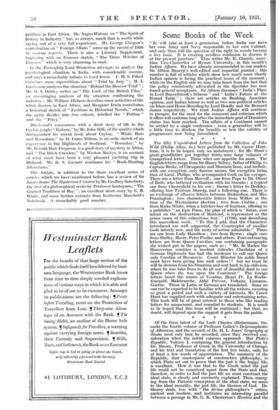 Page 26, 10 January 1931 — The fifty Unpublished Letters from the Collection of John Wild
Close

The fifty Unpublished Letters from the Collection of John Wild

(Philip Allan, Os.) here published by Mr. Carew Hunt, form, it is to be hoped, only an instalment ; for Mr. Hunt's great-grandfather got together thirty-nine large volumes of Grangerized letters. These whet our appetite for more The English letters range from Sir Henry Sidney, father of Philip, to Captain Broke, of Chesapeake and Shannon fame, and include, with one exception, only famous names, the exception being that of Lieut. Philips, who accompanied Cook on his voyages. There are a letter from Marvell ; one from Pope to Dr. Oliver of Bath, who bettered civilization with his biscuits ; a typical one from Chesterfield to his son ; Stern's letter to Dodsley, offering him Tristram Shandy, and a following one. There is an exchange of effusive letters between Richardson and Miss Pennington ; two characteristic letters from Wilkes at the time of the Westminster election - two from Crabbe ; one from Kirke White, when a butcher-boy of fourteen, offering to a publisher " an Epic Poem, the plan of which is ' Satan, ever intent on the destruction of Mankind, is represented as the prime cause of this calamitous war,' " (1799), and describing this marvellous work. " To this I add, that the Characters introduced are well supported, the Counterplot of auxiliar Gods intirely new, and the unity of action admirable." There are one from Lady Hamilton - two from Byron ; single ones from Shelley, Moore, Peter Pindar, and others. Four entrancing letters are from Queen Caroline, one containing paragraphs she wished put in the papers, such as : " Mr. de Raden the Hanoverian minister a insolent ridicules Charlatan of a German Diplomate has had the insolence to call our Queen only Caroline of Brounsvic. Count Miinster his noble friend must have been giving him such orders ! ! but we trust he will be dismiss from his Situation and sent back to his oblivions where he was take from to do all sort of dreadful deed to our Queen when she was upon the Continent."' The foreign letters boast the names of Vesalius, Henri IV, La ROche- foucauld, Malebranche, Abbe Prevost, Voltaire, Linnaeus, Goethe. Those in Latin or German are translated. Since 'no one can be expected to be familiar with all the writers, covering so great a period and such a variety of interests, Mr. Carew Hunt has supplied each with adequate and entertaining notes. This book will be of great interest to those who like reading letters for amusement, and essential to students. It is much to be hoped that this issue will be continued ; but that, no doubt, will depend upon the support it gets from the public.