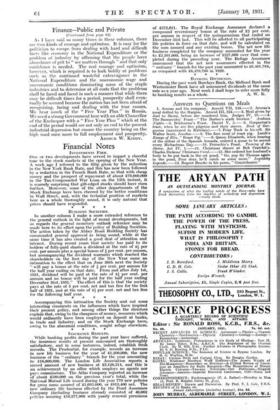 While banking profits during the past year have suffered, the insurance results at present announced are thoroughly satisfactory, and in some instances, indeed, establish fresh records. The Prudential, for example, records an increase in new life business for the year of £1,200,000, the new business of the " ordinary " branch for the year amounting to £18,800,000. The London Life Association reports a record amount of new business at £3,126,514, and this is an achievement by an office which employs no agents nor pays commissions. The Atlas Company reported an increase of about £180,000 on the previous year's total, while the National Mutual Life issued during the year 770 new policies for gross sums assured of £1,095,000, or £813,400 net. The new ordinary life business effected by the Pearl Assurance Company (including business abroad) consisted of 40,062 policies assuring £10,877,000 with yearly renewal premiums

of £572,611. The Royal Exchange Assurance declared a compound reversionary bonus at the rate of £2 per cent. per annum in respect of the quinquennium that ended on December 31st last. This will be allotted to all participating life policies in force on that date, and will be calculated on the sum assured and any existing bonus. The net new life business completed by the company amounted for the year to £2,501,000, being an increase of £227,000 over that com- pleted during the preceding year. The Refuge Assurance announced that the net new assurances effected in the " ordinary " branch for the past year amounted to £6,481,784, as compared with £6,479,796 in 1929.