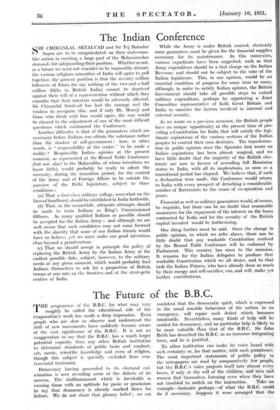 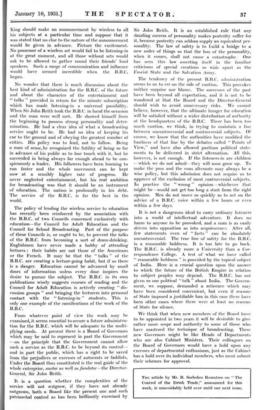 The Future of the B.B.C.

T"programme of the B.B.C. for what may very roughly be called the educational side of the Corporation's work has made a deep impression. Even people who are slow to observe and understand the drift of new movements have suddenly become aware of the vast significance of the B.B.C. It is not an exaggeration to say that the B.B.C. has a much larger potential capacity than any other .British institution to determine standards of public taste and conduct, art, music, scientific knowledge and even of religion, though this subject, is specially excluded from cone troversial treatment.

Democracy having proceeded to its electoral cul- mination is now revealing some of the defects of its success, The disillusionment which is inevitable is causing those with an aptitude for panic or pessimism to say that democracy is already marked down for failure. We do not share that gloomy belief ; we are confident that the .democratic spirit, which is expressed in the usual sensible behaviour of the nation in an emergency, will repair each defect which becomes intolerable. Nevertheless, many kinds of help will be needed for democracy, and no particular 'help is likely to be more valuable than that of the ICB.C. Sir John Reith has described the B.B.C. as an immense integrating fOrce, and he is justified.

No other institution can make its voice heard with such certainty or, fOr that matter, with such persistence: The most important statements of -publics _policy hi the newspapers are read by comparatively few people; but the B.B.C.'s voice projects itself into almost every home, if only at the will of the children, and' men and women find themselves listening even when they have not troubled 'to switch on the instruction. Take an example—fantastic perhaps—of what the B.B.C. could do if necessary. Suppose it were arranged that the King should make an announcement by wireless to all his subjects at a particular time and suppose that it was stated that no clue to the nature of the announcement would be given in advance. Picture the excitement. No possessor of a wireless set would fail to be listening-in at the great moment, and all those without sets would ask to be allowed to gather round their friends' loud speakers. Such a range of communication and influence would have seemed incredible when the B.B.C. began.

No wonder that there is much discussion about the best kind of administration for the B.B.C. of the future and about the character of the entertainment and " talks " provided in return for the minute subscription which has made listening-in a universal possibility. When Sir John Reith took the B.B.C. in hand the occasion and the man were well met. He showed himself from the beginning to possess strong personality and deter- mination. He had a clear idea of what a broadcasting service ought to be. He had no idea of keeping his ear to the ground and of obeying the greatest number of critics. His policy was to lead, not to follow. Being a man of sense, he recognized the futility of being so far in advance of his public as to lose touch with it, but he succeeded in being always far enough ahead to be con- spicuously a leader.. His followers have been learning to run faster and the whole movement can be kept now at a sensibly higher rate of progress. He never neglected entertainment, but his real ambition for broadcasting was that it should be an instrument of education. The nation is profoundly in his debt. The service of the B,B.C. is far the best in the world. • The policy of lending the wireless service to education has recently been reinforced by the association with the B.B.C. of two Councils concerned exclusively With education—the Council for Adult Education and the Council for School Broadcasting. Part of the purpose of these Councils is, or ought to be, to prevent the talks of the B.B.C. from beconiing a sort of dram-drinking. EngliShMen have never made a hobby of attending lectures ; their habits are not those of the Americans or the 'French. It may be that the " talks " of the B.B.C. are -creating a lecture-going habit, but if so there is danger, Education cannot be advanced by small doSes of information unless every dose inspires the desire to pursue the subject. The B.B.C. in its own publications wisely suggests courses of reading and the Council for Adult Education is actively creating " dis- cussion groups " and bringing the lecturers into personal contact with the " listening-in " students. This is only one example of the ramifications of the work of the B.B.C.

From whatever point of view the work may be examined, it seems essential to secure a future administra- tion for ,the B.B.C. which will be adequate to the multi- plying needs. At present there is a Board of Governors which may be said to represent in part the Government —on the principle that the Government cannot allow such a service as the B.B.C. to be beyond its control— and in:part the public,. which has a right to be saved from the prejudices or excesses of autocrats or faddists, Under the Board ilnis constituted is the real guide of the whole enterprise, auctor as well as fundator—the Director- General, Sir John Reith.

It" a question . whether the complexities -of the service will not outgrow, if they have not already outgrown, both a Board like the present. one and such • patriarchal control as has been brilliantly exercised by Sir John Reith. It is an established rule that any dazzling success of personality makes posterity suffer for it, because posterity can seldom supply an equivalent per- sonality. The law of safety is to build a bridge to a new order of things so that the loss of the personality, when it comes, shall not cause a catastrophe. One has seen . this law asserting itself in the familiar criticisms of special creations so wide apart as the Fascist State and the Salvation Army.

The tendency of the present B.B.C. administration seems to us to err on the side of caution. This provokes neither surprise nor blame. The successes of the past have been beyond all expectation, and it is not to be wondered at that the Board and the Director-General should wish to avoid unnecessary risks. We cannot believe, however, that the ultimate hunger for education will be satisfied without a wider distribution of authority at the headquarters of the B.B.C. There has been too much caution, we think, in trying to maintain a line between uncontroversial and controversial subjects. Of course, we know that the authorities have modified the hardness of that line by the debates called " Points of View," and have also allowed partisan political state- ments to be delivered in strict alternation. All this, however, is not enough. If the listeners-in are children —which we do not admit—they will soon grow up. To make the pros and the cons alternate may always be a wise policy, but this admission does not require us to approve of the exclusion of most controversial subjects. In practice the " wrong " opinion--whichever that might be—would not get too long a start from the right opinion. Men do not move so quickly as to act on the advice of a B.B.C. voice within a few hours or even within a few days.

It is not a dangerous ideal to carry ordinary listeners into a world of intellectual adventure. It does no harm to anyone to be provoked, and a man is as 'easily driven into opposition as into acquiescence. After all, few statements even of " facts " can be absolutely uncontroversial. The true line of safety for the B.B.C. is a reasonable boldness. It is too late to go back. The B.B.C. is already more a University than a Cor- respondence College. A test of what we have called " reasonable boldness " is provided by the topical subject of India. Here is a crucial question upon the answer to which the future of the British Empire in relation to subject peoples may depend. The B.B.C. has not given us one political "talk" about India. The Govern- ment, we suppose, demanded a reticence which may have been, considered convenient, but even if reasons of State imposed a justifiable ban in this case there have been other cases where there were at least no reasons of State for silence.

We think that when new members of the Board have to be appointed in two years it will be desirable to give rather more scope and authority to some of those who have mastered the technique of broadcasting. These new Governors might be like Heads of Departments who are also Cabinet Ministers. Their colleagues on the Board of Governors would have a hold upon any excesses of departmental enthusiasm, just as the Cabinet has a hold over its individual members, -who must submit their schemes for approval.

TriE article by Mr. B. Seebohrn Rowntree on " The Ointrol of the Drink Trade;" announced for this week, is unavoidably held over until our next issue.