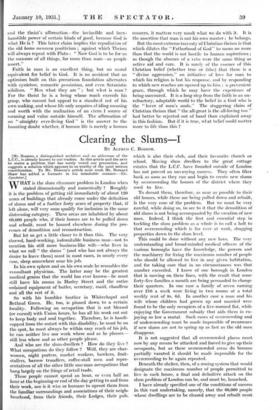 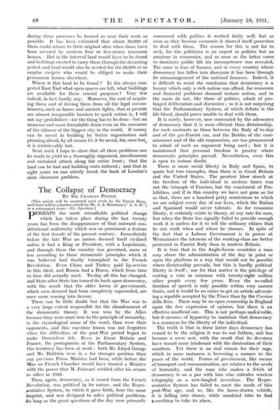 Clearing the Slums I

[Mr. Bossom, a distinguished architect and an alderman of the L.C.C., is already known to our readers. In this article and the next he states a problem that has sorely vexed our generation, and suggests a solution which appears to us worthy of the most serious consideration. To Mr. Bossom's article next week Mr. Bernard Shaw has added a footnote in his inimitable manner.—En. Spectator.] WHAT is the slum clearance problem in London when stated dimensionally and numerically ? Roughly it is the problem of getting rid immediately of about 120 acres of buildings that already come under the definition of slums and of a further forty acres of property that, if left alone, will very soon qualify for inclusion in the same distressing category. These areas are inhabited by about 60,000 people who, if their homes are to be pulled down and rebuilt, must be housed elsewhere during the pro- cesses of demolition and reconstruction.

But let us get a little closer to it than this. The very shrewd, hard-working, indomitable business man—not to mention his still more business-like wife—who lives in what we call " the slums " (and who has not always the desire to leave them) must in most cases, in nearly every case, sleep somewhere near his job.

In his own sphere and on his own scale he resembles the consultant physician. The latter may be the greatest medical genius that the world has ever known—he must still have his rooms in Harley Street and the entire ordained equipment of butler, secretary, maid, chauffeur and all the rest of it.

So with his humbler brother in Whitechapel and Bethnal Green. He, too, is pinned down to a certain locality. Following an occupation that is not blessed (or cursed) with Union hours, he has all his work cut out to keep body and soul together. Therefore, he is handi- capped from the outset with this disability, he must be on the spot, he must always be within easy reach of his job, he can neither live nor work where and as he pleases— still less where and as other people please.

And who are the slum-dwellers ? How do they live ? What occupations do they follow ? Well, they are char- women, night porters, market workers, hawkers, fruit- stallers, barrow trundlers, coffee-stall men and repre- sentatives of all the other little one-man occupations that hang largely on the fringe of retail trade. These people cannot spend an hour, or even half an hour at the beginning or end of the clay getting to and from their work, nor is it wise or humane to uproot them from the familiar surroundings and associations of their neigh- bourhood, from their friends, their Lodges, their pub. which is also their club, and their favourite church or school. Moving slum dwellers to the great cottage estates that the L.C.C. have founded outside of London has not proved an unvarying success. They often filter back as soon as they can and begin to create new slums by overcrowding the houses of the district where they used to live.

To decant them, therefore, as near as possible to their old homes, while these are being pulled down and rebuilt, is the very core of the problem. But we must be very careful, while doing so, to sec to it that the demolition of old slums is not being accompanied by the creation of new ones. Indeed, I think the first and essential step in tackling the slum problem as a whole is to call a halt to that overcrowding which is for ever at work, dragging properties down to the slum level.

This could be done without any new laws. The very understanding and broad-minded medical officers of the various boroughs have the knowledge, the powers and the machinery for fixing the maximum number of people who should be allowed to live in any given habitation, and for taking care that in no circumstances was that number exceeded. I know of one borough in London that is moving on these lines, with the result that some forty-five families a month are being persuaded to change their quarters. In one case a family of seven earning over £10 a week were living in two rooms at a total weekly rent of 8s. 6d. In another case a man and his wife whose children had grown up and married were found to be the only occupiers of a five-roomed fiat, while enjoying the Government subsidy that aids them in en- joying so low a rental. Such cases of overcrowding and of undercrowding must be made impossible of recurrence if new slums are not to spring up as fast as the old ones disappear.

It is not suggested that all overcrowded places must now by any means be attacked and forced to give up their occupants, but as these overcrowded areas do become partially vacated it should be made impossible for the overcrowding to be again repeated.

Beneath the shelter, then, of a zoning system that would designate the maximum number of people permitted to live in each house, a final and definitive attack on the slum problem of London can be, and must be, launched.

I have already specified one of the conditions of success in this vast undertaking, namely, that the 60,000 people whose dwellings are to be cleared away and rebuilt must during these processes be housed as near their work as possible. It has been estimated that about 50,000 of them could return to their original sites when these have been covered by modern four or five-storey tenement houses. But in the interval land would have to be found' and buildings erected to carry them through the decanting period, and land would also be needed for the 10,000 or so surplus emigres who would be obliged to make their permanent homes elsewhere.

Where is this land to be found ? In the always con- gested East End what open spaces are left, what buildings are available for these crucial purposes ? Very few indeed, in fact hardly any. Moreover, the cost of acquir- ing them and of freeing them from all the legal encum- brances, such as leases and ancient lights, that at present are almost insuperable barriers to quick action is, I will not say prohibitive—for the thing has to be done—but an immense and most formidable drain even on the resources of the citizens of the biggest city in the world. If money can be saved in building by better organization and planning ahead, by all means let it be saved, for, once lost_ it is irretrievably lost.

Next week I hope to show that all these problems can be made to yield to a thoroughly organized, simultaneous and sustained attack along the entire front ; that the land can be had and building costs reduced ; and that in eight years we can utterly break the back of London's slum clearance problem.