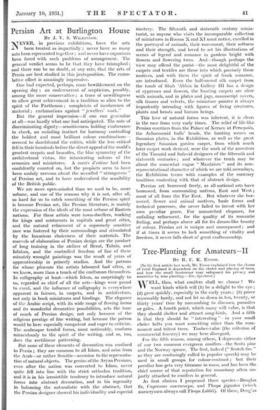 NEVER, in previous exhibitions, have the arts been treated as impartially ; never have so many arts been represented together ; and never have organizers been faced with such problems of arrangement. The general verdict seems to be that they have triumphed ;. and there can be no doubt, at any rate, that the arts of Persia are best studied in this juxtaposition. The cumu- lative effect is amazingly impressive.

One had expected, perhaps, some bewilderment on the opening day ; an undercurrent of scepticism, possibly, among the more conservative ; a trace of unwillingness to allow great achievement in a tradition so alien to the spirit of the Parthenon ; complaints of incoherence of material ; exclamations against " jewellers' work."

. But . the general . impression—if one can generalize at all—was hardly what one had anticipated. The note of discriminating dignitysensitiveness holding exuberance in check, an unfailing instinct for harmony controlling the boldest and most brilliant colour combinations— seemed to dumbfound the critics, while the less critical fell in their hundreds before the direct appeal of the world's greatest carpets and brocatics, the blue symmetry of the architectural vistas, the intoxicating colours of the ceramics and miniatures. A succes d'estime had been confidently counted on, but the prophets seem to have been unduly nervous about the so-called " strangeness " of Persian art, and to have undervalued the sensibility of the British public.

. We are more open-minded than we used to be, more urbane, and one of the reasons why it is not, after all, so hard for us to catch something of the Persian spirit is because Persian art, like Persian literature, is mainly the expression of the ideals of the most urbane of Eastern nations. For these artists were town-dwellers, working for kings and aristocrats in capitals and great cities, and the natural refinement of a supremely sensitive race was fostered by their surroundings and stimulated 11y the luxurious choiceness of their materials. The marvels of elaboration of Persian design are the product of long training in the ateliers of Herat, Tabriz, and Isfahan, and the controlled freedom of line of these minutely wrought paintings was the result of years of apprenticeship in princely studios. And the patrons for whose pleasure the artists laboured had often, as we know, more than a touch of the craftsman themselves. In calligraphy at least—which Islam, so surprisingly to us, regarded as chief of all the arts—kings were proud to excel, and the influence of calligraphy is everywhere apparent in faience, in carpets, and in architecture, not only in .book miniatures and bindings. The elegance of the Arabic script, with its wide range of flowing forms and its wonderful decorative possibilities, sets the tone of much of Persian design, not only because. of the religious prestige of fine. writing, but because the patron would. be here especially competent and eager to criticize. The arabesque tendril forms, most noticeably, conform miraculously to the spirit of the writing, and so, too, does the rectilinear patterning.

But none of these elements of decoration was confined to Persia ; they are conunon to all Islam, and arise from the Arab—or rather Semitic—aversion to the representa. tion of natural objects. The genius of the Aryan Persians, even after the nation was converted to Islam, never quite fell into line with, the strict orthodox tradition, and it is in his irresistible tendency to introduce natural forms into abstract decoration, and in his ingenuity in balancing .the. naturalistic with the abstract, that the Persian designer showed his individuality and especial mastery; The fifteenth and sixteenth century minia-, turist, as anyone who visits the incomparable collection of miniatures in Rooms X and XI must notice, excelled in the portrayal of animals, their movement, their softness and their strength, and loved to set his illustrations of scenes of legend and romance in gardens bright with flowers and flowering trees. And—though perhaps the view may offend the purist—the most delightful of the. carpets and textiles are those into which precisely these.. motives, and with them the spirit of frank romance, are introduced. Even the half-sacred silk carpet from the tomb of Shah 'Abbas in Gallery III has a design of cypresses and flowers, the hunting carpets are alive with animals, and in plates and jugs, manuscript covers, silk tissues and velvets, the miniature painter is always impudently intruding with figures of living creatures, plants and beasts and human beings.

This love of natural forms was inherent, it is clear, in the race from very early times. The relief of life-like Persian courtiers from the Palace of Xerxes at Persepolis, the Achaemenid bulls' heads, the hunting scenes on Sasanian plates, in the Exhibition, as well as. the great legendary Sasanian garden carpet, from which much later carpet work derived, were the work of the ancestors of the Timurid and Safavid designers of the fifteenth and sixteenth centuries ; and whatever the truth may be about the somewhat vague " Mazdaism " and its non-. representational character of which we are told nowadays, the Exhibition teems with examples of the contrary tradition contesting with that of abstract design.

Persian art borrowed freely, as all national arts have borrowed, from surrounding nations, East and West ; most of all from the Far East. But whatever she bor- rowed, flower and animal motives, basic forms and technical processes, she never failed to invest- with her own peculiar grace. For unmatched • elegance, for unfailing refinement, for the quality of its romantic feeling, and perhaps above all for its dream-like beauty of colour, Persian art is unique and unsurpassed ; and if at times it seems to lack something of vitality and freedom, it never falls short of great craftsmanship.