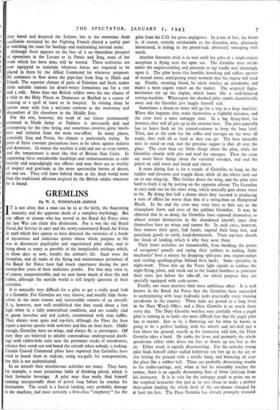 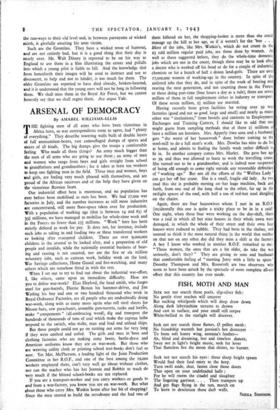 By W. E. WOOSNAM-JONES It is naturally very difficult for a pilot to get a really good look at a Gremlin. For Gremlins are very elusive, and usually hide themselves in the most remote and inaccessible corners of an aircraft. It is, however, now well established that they stand about a foot high when in a fully materialised condition, and are usually clad in green breeches and red jackets, ornamented with neat ruffles. They always wear spats and top-hats, although the Fleet Air Arm report a marine species with web-feet and fins on their heels. Oddly enough, Gremlins have no wings, and always fly as passengers. Off duty they are believed to inhabit commodious underground dwellings with rabbit-hole exits near the perimeter tracks of aerodromes, whence they sneak out and board the aircraft when nobody is looking. Certain Coastal Command pilots have reported that Gremlins have tried to board them in mid-air, using sea-gulls for transportation, but this is not authenticated.

In an aircraft their mischievous activities are many. They have, for example, a most pernicious habit of drinking petrol, which is their favourite beverage. A pilot may thus easily find himself running unexpectedly short of petrol long before he reaches his destination. The result is a forced landing, very probably damage to the machine, and most certainly a first-class " raspberry " for the pilot from his C.O. for gross negligence. In point of fact, the blame is, of course, entirely attributable to the Gremlin, who, gloriously intoxicated, is hiding in the petrol-tank absolutely whooping with mirth.

Another favourite trick is to wait until the pilot of a single-engine aeroplane is flying over the open sea. The Gremlin then sneaks under the engine-cowling and proceeds to tap loudly and alarmingly upon it. The pilot hears this horrible knocking and suffers agonies of mental stress, anticipating every moment that his engine will pack up. Finally, sweating blood, he safely reaches an aerodrome and makes a most urgent report on the matter. The sceptical flightmechanics rev up the engine, which hums like a well-behaved sewing-machine. Whereupon the abashed pilot crawls shamefacedly away and the Gremlin just laughs himself sick.

Sometimes a dozen or more will go for a trip in a large machine. When this happens they make themselves a frightful nuisance, and the crew have a most unhappy time. In a big flying-boat, for instance, they will all pile up in the extreme bow. The pilot naturally has to heave back on his control-column to keep the boat level. Then, just as the cook has the coffee and sausages on the stove all ready, they rush aft as hard as they can go. The boat naturally tries to stand on end, and the precious supper is shot all over the place. The crew then say bitter things about the pilot, while the Gremlins chortle with glee and steal the sausages. Then the crew say more bitter things about the vanished sausages, and end the patrol on cold water and bread and cheese.

A more daring feat is for a couple of Gremlins to hang on the rudder and elevators and waggle them, while all the others rush out on to one wing-tip. This fetches down the wing, and the pilot tries hard to fetch it up by putting on the opposite aileron. The Gremlins at once rush out on the other wing, which naturally goes down twice as far. By doing this half a dozen times they succeed in producing a state of affairs far worse than that of a swing-boat on Hampstead Heath. In the end the crew may even have to bale out, to the triumphant hoots and jeers of the jubilant Gremlins. It may be objected that in so doing the Gremlins have exposed themselves to almost certain destruction in the abandoned aircraft, since they themselves have no wings and cannot fly. In such cases, however, they remove their spats, link hands, expand their large feet, and parachute gently to earth, head-downwards. Their top-hats absorb the shock of landing, which is why they wear them.

Their lesser activities are innumerable, from breaking the points of navigators' pencils and eating their rubbers to making flight mechanics' lives a misery by dropping split-pins into engine-sumps and stealing sparking-plugs behind their backs. Some specialise in night-Work. These mix up the Verey light signals to confuse the night-flying pilots, and sneak out to the loaded bombers to puncture their tyres just before the take-off, for which purpose they are specially equipped with cork-screws.

Finally, one must mention their most ambitious effort. It is well known in the Royal Air Force that the Gremlins have succeeded in underpinning with large hydraulic jacks practically every training aerodrome in the country. These jacks are geared to a long lever its the Duty Watch Office, and a Duty Gremlin is on watch there every day. The Duty Gremlin watches very carefully when a pupil pilot is coming in to land—the most difficult feat that the pupil pilot has to master. Just as he is flattening out for what he knows is going to be a perfect landing, with his wheels and tail-skid just a foot above the ground, exactly as his instructor told him, the Duty Gremlin takes a hand. He yanks the lever, and promptly the whole aerodrome either sinks down ten feet or shoots up ten feet in the air. Either result is equally disconcerting. For the unlucky young pilot finds himself either stalled helplessly ten feet up in the air, or else hitting the ground with a terrific bang, and bouncing all over the place like a rubber ball. There are probably devastating results to his under-carriage, and, when at last he miserably reaches the tarmac, there is an equally devastating flow of bitter criticism from his instructor. It is in vain for the unhappy pupil to point out to the sceptical instructor that just as he was about to make a perfect three-point landing the whole level of the aerodrome changed by at least ten feet. The Duty Gremlin has already promptly restored the run-ways to their old level and, in between paroxysms of wicked mirth, is gleefully awaiting his next victim.

Such are the Gremlins. They have a wicked sense of humour, and are not entirely bad, but it is a good thing that their day is nearly over. Mr. Walt Disney is reported to be on his way to England to use them in a film illustrating the errors and pitfalls into which a young pilot is liable to fall. And the knowledge that from henceforth their images will be used to instruct and not to disconcert, to help and not to hinder, is too much for them. The older Gremlins are reported to have died already, broken-hearted, and it is understood that the young ones will not be long in following them. We shall miss them in the Royal Air Force, but we cannot honestly say that we shall regret them. Ave atque Vale.