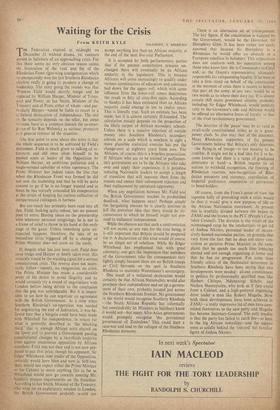 Waiting for the Crisis

'HE Federation expired at midnight on December 31 without drama, yet rumours persist in Salisbury of an approaching crisis. For this there seems no very obvious reason unless the frustration of the rank and file of the Rhodesian Front right-wing amalgamation which so unexpectedly won the last Southern Rhodesian election really is going to produce a change of leadership. The story going the rounds was that Winston Field would shortly resign and be replaced by William Harper, Minister of Trans- port and Power, or Ian Smith, Minister of the Treasury and of Posts, either of whom—and par- tiL ularly Harper—would be liable to resort to a u: ilateral declaration of independence. The rest of the scenario depends on the teller, but some ver,,ions have as a common feature the re-emer- gence of Sir Roy Welensky as saviour, protector ar general restorer of the situation.

The first point to note about this story is that the whole sequence is to be activated by Field's retirement. Field is much given to talking of re- tirement and did once allow himself to be pushed aside as leader of the Opposition by William Harper, an ambitious politician and a single-minded upholder of white supremacy. The Prime Minister has indeed taken the line that when the Rhodesian Front was formed he did not seek the leadership and that he will be quite content to go if he is no longer wanted and at times he has scarcely concealed his exasperation at the strain of keeping his curious collection of inexperienced colleagues in harness.

But too much has probably been read into all this. Field, looking quite robust, has no present plan to retire. Having taken on the premiership with whatever personal misgivings, he is not in a frame of mind to throw in his hand at this early stage of the game. Unless something quite un- expected happens, therefore, the idea of an immediate crisis triggered off by a change of Prime Minister does not seem on the cards.

If, despite what has just been said, Field does soon resign and Harper or Smith takes over, this certainly would be the warning signal for a serious constitutional crisis. The reverse does not neces- sarily follow—namely, no resignation, no crisis. The Prime Minister has made a considerable

• point of his desire to avoid illegality and he would certainly try a round of negotiations with London before being driven to the conclusion that the gap was unbridgeable. But it is impos- sible to see how he can negotiate an agreement with the British Government. At a time when Southern Rhodesia's co-operation was needed for negotiating the end of federation, it was be- lieved here that a bargain could have been made with Whitehall for independence, in return for what is generally described as 'the blocking third,' that is, enough African seats elected on the lower roll to prevent a Government passing constitutional changes by a two-thirds majority even against unanimous opposition by African members. Field was not then and is not now pre- pared to pay that price, though his opponent, Sir Edgar Whitehead, now leader of the Opposition, certainly would have been and now is. Still less, then, would one expect either the Prime Minister or his Cabinet to move anything like as far as Whitehead would now go towards meeting Mr. Sandys's present requirements on the franchise. According to Ian Smith, Minister of the Treasury, %\ho■vent on an exploratory mission to London, the British Government probably would not

accept anything less than an African majority at the end of the next five-year Parliament.

It is accepted by both parliamentary parties that if the present constitution remains un- changed there will eventually be an African majority in the legislature. This is because Africans will come increasingly to qualify under various combinations of education and substance laid down for the upper roll, which with some influence from the lower-roll voters determines the result in fifty of sixty-five seats. According to Sandys it has been estimated than an African majority could emerge in ten to twelve years. This is literally true. Such an estimate has been made, but it is almost certainly ill-founded. The calculation mainly depends on the projection of the likely output of African secondary schools. Unless there is a massive injection of outside money into Southern Rhodesia's secondary schools on a scale which is nowhere in sight a more plausible statistical exercise has put the change-over at eighteen years from now. For Africans, of course, this is a hopeless proposition. If Africans who are to be trained in parliamen- tary government are to be the Africans who take over and apply their experience, it is pointless inducing Nationalist leaders to accept a length of transition that will separate them from the masses and ensure their subsequent rejection and their replacement by untrained opponents.

When any negotiatioh between Mr. Field and the British Government reaches its predestined deadlock, what happens next? Perhaps simply for bargaining reasons he is clearly anxious to kill the prevalent idea that there would be cir- cumstances in which he himself might not pro- ceed to unilateral independence.

While the chances are that such a confrontation will not occur, at any rate for the time being, it is still important that Britain should be prepared for it. A declaration of this kind would of course be an illegal act of rebellion. While Sir Edgar Whitehead has emphasised this with great solemnity, one gets the impression that members of the Government take the consequences very lightly simply because there are no British troops or Civil Servants on the spot in Southern Rhodesia to maintain Westminster's sovereignty.

One result of a unilateral declaration would certainly be that African Nationalists would also proclaim their independence and set up a govern- ment of their own, probably located just across the Northern Rhodesian frontier. No government in the world would recognise Southern Rhodesia —the South African Republic has informally but unmistakably let Ministers in Salisbury know it would not—but many Afro-Asian governments would promptly recognise 'the provisional government of Zimbabwe.' This could start a race-war and lead to the collapse of the Southern Rhodesian economy. There is an alternative set of consequences. The key figure, if the constitution is violated by the Government, would be the Governor, Sir Humphrey Gibb. It has been rather too easily assumed that because Sir Humphrey is a Rhodesian he • would offer no obstacle to a European rebellion in Salisbury. This supposition does not conform with his reputation among those who know him. He is Commander-in-Chief and, as the Queen's representative, ultimately responsible for safeguarding legality. If he were to take a firm stand on behalf of the constitution at the moment of crisis there is reason to believe that part of the army, at any rate, would be in two minds as to where their duty lay. It is almost certain thSt many prominent citizens, probably including Sir Edgar Whitehead, would publicly rally to the•Governor's side and Africans would be offered an alternative focus of loyalty to that of the rival revolutionary government.

The doctrine of the 'pause' may be as valid in small-scale constitutional crises as in a great- power clash. So also may that of the deterrent. Many Rhodesian supporters , of the present Government believe that Britain's only deterrent —the flying-in of troops—is too massive to be credible. It might not be a bad idea for it to be- come known that there is a range of graduated deterrents at hand—a British request to all nations to withhold recognition, the freezing of Rhodesian reserves, non-recognition of Rho- desian passports and currency, cancellation of Imperial preference, suspension of guarantees to bond-holders.

Of course, from the Front's point of view the supreme folly of provoking such a crisis would be that it would give a new purpose of life to the African Nationalist movement. At present this is woefully divided between the brains in ZANU and the brawn in the PCC (People's Care- taker Council). The division is the result of the mismanaged coup by the intellectuals to get rid of Joshua Nkomo, perennial leader of succes- sively-banned nationalist parties, on grounds that vary from the fact that he does not carry con- viction as putative Prime Minister to the com- plaint that he spends too much time lobbying abroad and not enough organising at home and that he has no programme. For some time friendly critics of the Nationalist movement in Southern Rhodesia have been saying that two developments were needed: all-out commitment to politics by professionally qualified men like Herbert Chitepo, Ndabaningi Sithole, and Nathan Shamuyarira, who look as if they could form a Cabinet, and a high-powered organising drive under a man like Robert Mugabe. Now both these developments have been achieved in ZANU—a really impressive list of men have com- mitted themselves to the new party and Mugabe has become Secretary-General. The only trouble is that the party has failed to catch fire—at least in the big African townships—and the masses seem as solidly behind the 'rejected' but familiar figure of Joshua Nkomo.