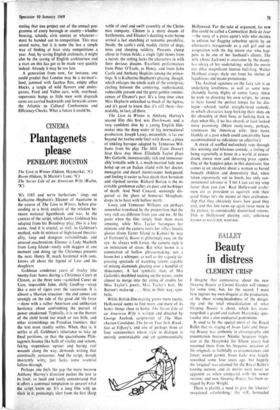 The Secret Life of an-American Wife (Rialto, 'X') 'It's 1183 and we're barbarians.' sings out Katharine Hepburn's Eleanor of Aquitaine in the course of The Lion in Winter. before pro- ceeding to a brisk analysis of the relation be- tween national figureheads and war. In the context of the script, which James Goldman has adapted from his Broadway play, this is a -key scene. And it is crucial, as well, to Goldman's method, with its mixture of high-keyed theatric- ality, keep and dungeon verisimilitude, and amused anachronism. Eleanor is Lady Macbeth from Long Island—steely with daggers at one Moment and doing up the Christmas presents the next. Henry II, much burdened with sons, knows all about the legend of Lear and his daughters.

Goldman condenses years of rivalry into twenty-four hours during a Christmas Court at Chinon, as the three sons—tarnished Coeur de Lion, impossible John, chilly Geoffrey—scrap like a nest of tigers over the succession. It is almost a Shavian situation—the end comes out strongly on the side of the good old life force —done with a rather American and unShavian hesitancy about confronting the pursuit of power unadorned. Typically, it is on the themes of the child loved too much or too little, and other skirmishings on Freudian frontiers, that the text most readily settles. When, that is, it settles at all. Goldman's reluctance to take up fixed positions, so that the quarrelsome Plan- tagenets bounce like balls of vitality and venom, faking stupendous uproar and baring real wounds along the way, demands writing that continually coruscates. And the script, though insistently witty, just lacks some essential follow-through.

Perhaps one feels the gap the more because Anthony Harvey's direction pushes the text to its limit; so lucid and tautly concentrated that it offers a continual temptation to unravel what the script knots up. It's a long film with no slack in it, pouncingly alert from the first Aarp rattle of steel and swift assembly of the Christ- mas company. Chinon is a misty dream of battlements, and Eleanor's dazzling water-borne arrival a last snatching at romantic possibility. Inside, the castle's cold, muddy clutter of dogs, hens and sleeping soldiery. Peasants clump about in frozen fields; a single light shines from a turret; the setting locks the characters in with their devious "dreams. Excellent performances from Peter O'Toole, as Henry, and from John Castle and Anthony Hopkins among the prince- lings. It is Katharine Hepburn's playing, though, which enlarges the whole scale of the enterprise, circling between the conniving, sophisticated, vulnerable present and the great golden reminis- cences of Eleanor's past. It's a long time since Miss Hepburn unleashed so much of the tigress, and it's good to know that it's still there—for- midably, in fact, all there.

The Lion in Winter is Anthony Harvey's second film (his first was Dutchman), and a very confident dive by a young English film- maker into the deep water of big international production. Joseph Losey, meanwhile, is far out beyond the twelve-mile limit with Boom, a piece of tinkling baroque adapted by Tennessee Wil- liams from his play The Milk Train Doesn't Stop Here Any More. Elizabeth Taylor plays Mrs Goforth, immeasurably rich and immeasur- ably-irritable with it, a much-married lady now holed up on an Italian island with her doctor, menagerie and dwarf stormtrooper bodyguard, and finding it easier to face death than boredom and slipshod service. Richard Burton is the in- evitable gentleman caller, ex-poet and harbinger of death. And Noel Coward, seemingly dis- guised as the ghost of Somerset Maugham, drops in to hoot with hollow mirth.

Losey and Tennessee Williams are perhaps somewhat transfixed by the proposition that the very rich are different from you and me. At the point when the film simply finds them more amusing, while Miss Taylor harangues her minions and the camera tours her villa's lunatic glories (from Easter Island to Kabuki by way of Fortnum's), Boom is glitteringly easy on the eye. As always with Losey, the camera style is an intimation of stress. But what looms is a commotion of hollow phrase-making, not a boom but a whimper, as well as the vaguely de- pressing spectacle of watching talents capable of mining diamonds gloating over a handful of rhinestones. A last symbolic shot, of Mrs Goforth's deathbed rocking on the waves, seems almost to merge into the string of credits for Miss Taylor's jewels, Miss Taylor's hair, Mr Burton's make-up . . . Also, in their way, sym- bolic.

While British film-making grows more exotic, Hollywood seems to find more and more of its better things close to home. The Secret Life of an American Wife is written and directed by George Axelrod, scriptwriter of The Man- churian Candidate, The Seven Year Itch, Break- fast at Tiffany's, and one of perhaps three or four screenwriters whose style in dialogue is entirely unmistakable and yet quintessentially Hollywood. For the sake of argument, his new film could be called a Connecticut Belle de Jour —the story of a press agent's wife who decides to enliven her flagging suburban spirits by an afternoon's masquerade as a call girl and an assignation with the big movie star who hap- pens to be one of her husband's clients. The wife (Anne Jackson) is overcome by the daunt- less idiocy of her undertaking: while the movie star (that magnificent human bull-frog, Walter Matthau) creeps shyly out from his shelter of lugubrious and insane pretensions.

The Axelrod signature on the fairy tale is an underlying kindliness, as well as some non- chalantly barmy flights of comic fancy. Since he took to directing his own scripts, he seems to have found the perfect tempo for his dia- logue—relaxed, rueful, straight-faced comedy, in which characters keep barking their shins on the absurdity of their lives, or looking back to days when life, if no less absurd, at least looked more promising. (More rooty-tooty, perhaps, reminisces the American wife; then stares blankly at a past which could conceivably have accommodated so ridiculous an adjective.) A streak of muffled melancholy runs through this winning and hilarious comedy, a feeling of being regretfully at home in a world of power- drunk movie men and shivering press agents. One of the happiest jokes in this depressive line comes in an anecdote about a woman so buried beneath children and domesticity that, when taken expensively out to lunch, her only con- versational advance is '1 bet I can eat my soup faster than you Can.' Real Hollywood crafts- men are as provident as squirrels with their good things (it's the nature of their craftsman- ship that they obviously know how good they are), and this line turns up again twice more in the picture, to considerably diminished returns. This is Hollywood playing cute; otherwise known as waste not, want not.