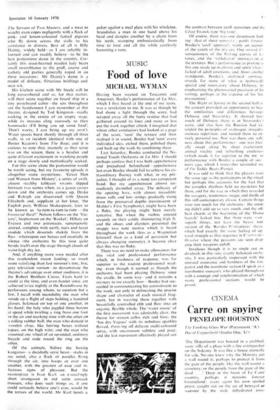 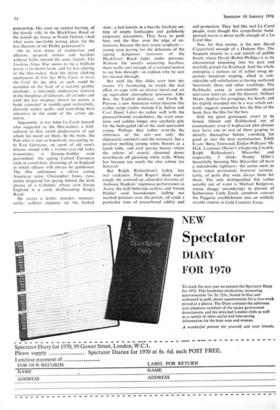 The Looking Glass War (Paramount, 'A') David Copperfteld (Studio One, 1J') 'The Department was housed in a crabbed, sooty villa of a place with a fire extinguisher on the balcony. It was like a house eternally for sale. No one knew why the Ministry put a wall round it: perhaps to protect it from the gaze of the people. like the wall round a cemetery: or the people from the gaze of the dcad .' Deep in the heart of Le Carte country, perhaps it remains forever Greeneland: every agent his own spoiled priest, caught out on the ice of betrayal or warmed by the stale, dehydrated corn- panionship, like used up central heating, of the dowdy villa in the Blackfriars Road or the rented spy house in North Oxford. (And what more inevitable resting place for the last illusions of the Philby generation?)

On its own terms of mannerism and allusion, ice-pack ironies and loyalties without faiths behind the sooty laurels. The Looking Glass War seems to me a brilliant novel; a far better book, and far less alluring to the film-maker, than the sharp, clicking mechanism of The Spy Who Caine in from the Cold. Its spy plot, as such, could be recorded on the back of a suitably grubby envelope : a freezingly undramatic exercise in the bunglings of delusion, all attitudes and until the last chapters almost no action, a book saturated in middle-aged melancholy, elusively useless guilts, and everything least attractive to the mind of the action spy movie.

Apparently, it was John Le Carre himself who suggested to the film-makers a half- solution to that awful predicament of age which his novel set them. In the book, the Pole who is sent so hopelessly marauding in- to East Germany, an agent of old men's dreams armed with a twenty-year-old radio transmitter, is Greene-Ambler man personified : the ageing Central European exile in camel-hair, dreaming of an England in which officers will always be gentlemen. The film substitutes a clever young American actor, Christopher Jones, ram- pantly disguised for spying behind the dark glasses of a Cybulski, whose own dream England is a cool, disillusioning King's Road.

He waves a knife; murders unneces- sarily; collects stigmata on the barbed

wire: a lost lunatic in a heavily fatalistic set- ting of empty landscapes and guilelessly enigmatic encounters. They have to push him, and the film, over the edge of ex- tremism,Taecause the new ironic emphasis — young man paying for the delusions of the ageing. dangerous fantasists of the Blackfriars Road—fades under pressure. Without the novel's saturating loyalties, there really isn't enough of a rational motive to see him through—or explain why he sees his mission through.

But until the film slides over into spy mania, it's fascinating to watch the real effort to cope with an elusive novel and set up equivalent atmospheric pressures. John Box, the English producer, and Frank R. Pierson, a new American writer-director (his earlier script credits include Cat Ballou and Cool Hand Luke) do rather well with the protocol-bound waspishness, the wary emo- tions and sudden lunges into apathetic pity for the bedraggled old or the steel-spectacled young. Perhaps they rather over-do the whiteness of the sets—not only the diplomatic corridors and the mortuary, but a revolver nestling among white flowers at a lunch table, and civil service homes where the echoes of crossly slammed doors reverberate off gleaming white walls. White has become too much the chic colour for betrayal.

Nor, for that matter, is the new David Copperfield enough of a Dickens film. The frequent returns to a sad stretch of pebble beach, where David (Robin Phillips) is to be encountered enquiring into his past and tearfully poised for flashback, lend the whole enterprise a curious air of rather smug de- jection—luxuriant moping, allied to con- siderable self-satisfaction at having outlasted Steerforth, Dora and other weaklings. The flashbacks come at conveniently spaced television intervals, and the director. Delbert Mann, deploys his groupings, his beach, and his slightly cramped sets in a way which cer- tainly suggests somewhat less the film of the book than the film for the box.

Still, the great grotesques aren't to be boned, filleted and flashbacked out of countenance, even if haphazard plot elisions may leave one or two of them gasping to identify themselves before vanishing for good or into the next reminiscence. Edith Evans' Betsy Trotwood, Emlyn Williams' Mr Dick, Laurence Olivier's whispering Creakle, Ralph Richardson's Micawber and (especially, I think) Wendy Hiller's beautifully beaming Mrs Micawber all have a redoubtable rightness: the actors seem to have taken possession, however momen- tarily, of parts that were always there for them. The only distinguished fish rather notably out of water is Michael Redgrave, whose shaggy meanderings in pursuit of bothersome Little Emily somehow convert the Peggotty establishment into an unlikely seaside annexe in Cold Comfort Farm.