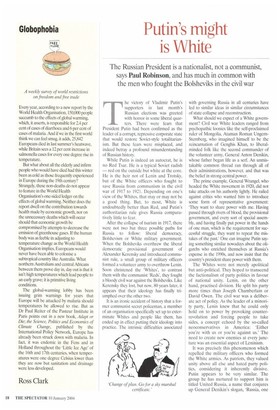 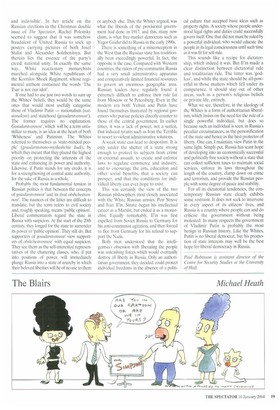 The Russian President is a nationalist, not a communist, says Paul Robinson, and has much in common with the men who fought the Bolsheviks in the civil war The victory of Vladimir Putin's supporters in last month's Russian elections was greeted with horror in some liberal quarters. There were fears that President Putin had been confirmed as the leader of a corrupt, repressive corporate state that would restore Soviet-style totalitarianism. But these fears were misplaced, and indeed betray a profound misunderstanding of Russian history.

While Putin is indeed an autocrat, he is no Red Tsar. He is a typical Soviet radish — red on the outside but white at the core. He is the heir not of Lenin and Trotsky, but of the White officers who fought to save Russia from communism in the civil war of 1917 to 1921. Depending on one's view of the Whites, that may or may not be a good thing. But, to most, White is undoubtedly better than Red, and Putin's authoritarian rule gives Russia comparatively little to fear.

After the collapse of tsarism in 1917, there were not two but three possible paths for Russia to follow: liberal democracy, Bolshevism or White military government. When the Bolsheviks overthrew the liberal democratic provisional government of Alexander Kerenslcy and introduced communist rule, a small group of military officers formed a volunteer army to overthrow Lenin. Soon christened the 'Whites', to contrast them with the communist 'Reds', they fought a bloody civil war against the Bolsheviks. Like Kerensky they lost, but now, 80 years later, it appears that their ideology has finally triumphed over the other two.

It is an ironic accident of history that a former communist secret policeman, a member of an organisation specifically set up to exterminate Whites and people like them, has ended up in effect putting their ideology into practice. The intrinsic difficulties associated with governing Russia in all centuries have led to similar ideas in similar circumstances of state collapse and reconstruction.

What should we expect of a White government? Civil war White leaders ranged from psychopathic loonies like the self-proclaimed ruler of Mongolia, Ataman Roman UngernSternberg, who imagined himself to be the reincarnation of Genghis Khan, to liberalminded folk like the second commander of the volunteer army, General Anton Denikin, whose father began life as a serf. An unmistakable common thread ran through all of their administrations, however, and that was the belief in strong central power.

The prime example, General Wrangel, who headed the White movement in 1920, did not take attacks on his authority lightly. He railed against critics who wanted him to introduce some form of representative government: 'They want to share power with me. Having passed through rivers of blood, the provisional government, and every sort of special assembly, and having finally put power in the hands of one man, which is the requirement for successful struggle, they want to repeat the mistakes of the past.' One can imagine Putin saying something similar nowadays about the oligarchs who enriched themselves at Russia's expense in the 1990s, and now insist that the country's president share power with them.

The Whites were not merely apolitical but anti-political. They hoped to transcend the factionalism of party politics in favour of national unity. Lenin, on the other hand, practised division. He split his party more times than Joseph Chamberlain or David Owen. The civil war was a deliberate act of policy. As the leader of a minority party, Lenin knew that he could only hold on to power by provoking counterrevolution and forcing people to take sides, a concept echoed by the so-called neoconservatives in America: 'Either you're with us or you're against us.' The need to create new enemies at every juncture was an essential aspect of Leninism.

It was precisely this phenomenon which repelled the military officers who formed the White armies. As patriots, they valued unity above all else and hated party politics, considering it inherently divisive. Putin appears to be very similar. The group he has nurtured to support him is titled United Russia, a name that conjures up General Denikin's slogan, 'Russia, one and indivisible'. In her article on the Russian elections in the Christmas double issue of The Spectator, Rachel Polonsky seemed to suggest that it was somehow fraudulent of United Russia to stick up posters carrying pictures of both Josef Stalin and Alexander Solzhenitsyn. But therein lies the essence of the party's creed: national unity. In exactly the same way, White reactionary monarchists marched alongside White republicans of the Kornilov Shock Regiment, whose regimental anthem contained the words 'The Tsar is not our idol'.

If one had to use just two words to sum up the Whites' beliefs, they would be the same ones that would most usefully categorise those of Vladimir Putin — nationalism (flatsionalizm) and statehood (gosudarstvennost). The former requires no explanation. Gosudarsrvennost', which will be a term unfamiliar to many, is an idea at the heart of both 'Whitenessand Putinism. The Whites referred to themselves as 'state-minded people' (gosudarstvenno-mysliashchie liudi), by which they meant that they placed the highest priority on protecting the interests of the state and enhancing its power and authority. Likewise, if Putin stands for any credo, it is for a strengthening of central state authority, for the sake of Russia as a whole.

Probably the most fundamental tension in Russian politics is that between the concepts of gosudarstvennost' and its rival obshchestvennost'. The nuances of the latter are difficult to translate, but the term refers to civil society and, roughly speaking, means 'public opinion'. Liberal commentators regard the state in Russia with suspicion. At the start of the 20th century, they longed for the state to surrender its power to 'public opinion'. They still do. But supporters of gosudatstvennosr view supporters of obshchestvennost' with equal suspicion. They see them as the self-interested representatives of the chattering classes, who, if put into positions of power, will immediately plunge Russia into a state of anarchy in which their beloved liberties will be of no use to them

or anybody else. This, the Whites argued, was what the liberals of the provisional government had done in 1917, and this, many now claim, is what free-market democrats such as Yegor Gaidar did to Russia in the early 1990s.

There is something of a misconception in the West that the Russian state has traditionally been exceedingly powerful. In fact, the opposite is the case. Compared with Western countries, the rulers of pre-communist Russia had a very small administrative apparatus and comparatively limited financial resources to govern an enormous geographic area. Russian leaders have regularly found it extremely difficult to enforce their rule far from Moscow or St Petersburg. Even in the modern era both Yeltsin and Putin have found themselves frustrated by regional governors who pursue policies directly counter to those of the central government. In earlier times, it was a lack of power, not a surfeit, that induced tyrants such as Ivan the Terrible to resort to violent administrative solutions.

A weak state can lead to despotism. It is only under the shelter of a state strong enough to protect its subjects from crime or external assault, to create and enforce laws to regulate commerce and industry, and to encourage the arts, education and other social benefits, that a society can prosper, and that the conditions for individual liberty can ever hope to exist.

This was certainly the view of the two Russian philosophers most closely associated with the White Russian armies, Petr Struve and Ivan Il'in. Struve began his intellectual career as a Marxist, but ended it as a monarchist. Equally remarkably, Il'in was first expelled from Soviet Russia to Germany for his anti-communist agitation, and then forced to flee from Germany for his refusal to support the Nazis.

Both men understood that the intelligentsia's obsession with liberating the people was unleashing forces which would eventually destroy all liberty in Russia. Only an authoritarian government, they decided, could protect individual freedoms in the absence of a politi

cal culture that accepted basic ideas such as property rights. A society whose people understood legal rights and duties could successfully govern itself. One that did not must be ruled by a powerful individual, who would educate the people in its legal consciousness until such time as it was fit for self-rule.

This sounds like a recipe for dictatorship, which indeed it was. But Il'in made a clear distinction between dictatorial rule and totalitarian rule, The latter was 'godless', and while the state should be all-powerful in those matters which fell under its competence, it should stay out of other areas, such as a person's religious beliefs or private life. entirely.

What we see, therefore, in the ideology of the Whites is a form of authoritarian liberalism, which insists on the need for the rule of a single powerful individual, but does so because such an individual is seen, in Russia's peculiar circumstances, as the personification of the state and hence as the best protector of liberty. One can, I maintain, view Putin in the same light. Simply put, Russia has scant hope of developing into an economically successful and politically free society without a state that can collect sufficient taxes to maintain social services, enforce its laws throughout the length of the country, clamp down on crime and terrorism, and provide the Russian people with some degree of peace and stability.

For all its dictatorial tendencies, the contemporary Russian state clearly exhibits some restraint, It does not seek to intervene in every aspect of its citizens' lives, and Russia is a country where people can and do criticise the government without being molested. In many respects the government of Vladimir Putin is probably the most benign in Russian history. Like the Whites, Putin is no liberal democrat, but his promotion of state interests may well be the best hope for liberal democracy in Russia.

Paul Robinson is assistant director of the Centre for Security Studies at the University of Hull.