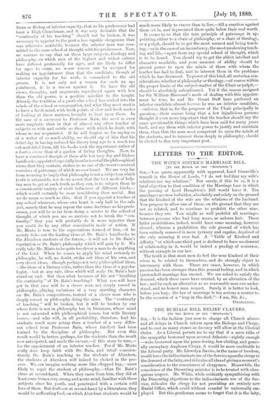 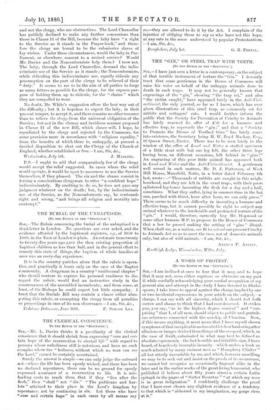 [TO THE EDITOR OF THE .° SPEOTATOR.1 Stu,—It is the fashion just now to charge all Church abuses and all delays in Church reform upon the Bishops and Clergy, and to cast as many stones as decency will allow at the Clerical Order. , As a Liberal, permit me to say that if a mere tithe of the sympathy bestowed upon avowed Atheists—rightly enough —were bestowed upon the peace-loving, law-abiding, and gener- ally exemplary Anglican Clergy, it would be more creditable to the I Aberal party. Mr. Lleivelyn Davies, in the name of freedom, would force the indiscriminate use of the Service upon the clergy at the demand of the laity, and ridicules all idea of giving a moment's consideration to the consciences of clergymen. Meanwhile, the conscience of the Dissenting minister is to be treated with obse- quious respect. Mr. White, while evidently sympathising with the Dissenting objections to the indiscriminate use of the Ser- vice, ridicules the clergy for not providing an entirely new Burial Office, which could without scandal be universally em- ployed. But this gentleman seems to forget that it is the laity,

and not the clergy, who are obstructives. The Lord Chancellor has publicly declined to make any further concessions than those in Clause 11 of the Bill, because the laity have "a right to the Service as it stands in the Prayer-book," and there- fore the clergy are bound to be the submissive slaves of lay wishes. Under these circumstances, would the laity in Par- liament, or elsewhere, consent to a revised service ? Would Mr. Davies and the Nonconformists help them ? I trow not. The laity, through the Lord Chancellor, demand the indis- criminate use of the Service as it stands ; the Nonconformists, svhile ridiculing this indiscriminate use, equally ridicule any presumption on the part of the clergy to be relieved of their ." duty." It seems to me to be the aim of all parties to forge as many fetters as possible for the clergy, for the express pur- pose of holding them up to ridicule, for the " chains " which they are compelled to wear.

No doubt, Mr. White's suggestion offers the best way out of the difficulty ; but it is hopeless to expect the laity, in their present temper, to accept it, and there remains no other resource than to relieve the clergy from the universal obligation of the service; but uot in the clumsy and invidious manner proposed in Clause 11 of the new Bill, which clause will, I hope, be repudiated by the clergy and rejected by the Commons, for some provision more in accordance with "religious equality," from the benefits of which there is, unhappily, at present a Gecided disposition to shut out the Clergy of the Church of Euglaud, whether established or free.—I am, Sir, &c., P.5.—I ought to add that comparatively few of the clergy -would accept the relief suggested. In cases where the relief would operate, it would be open to mourners to use the Service themselves, if they pleased. The sin and the shame consist in forcing a conscientious clergyman to utter "a confident hope" indiscriminately. By omitting to do so, he does not pass any :judgment whatever on the death ; but, by the indiscriminate -use of the Service, as the Nonconformists say, he confounds aight and wrong, "and brings all religion and morality into ,uontem pt."