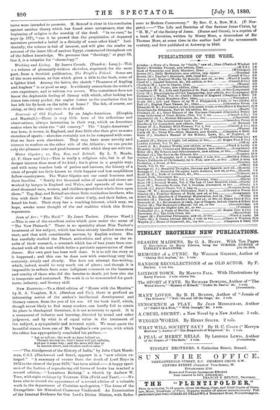 NEW EIHTIoNs.—To a third edition of "Hours with the Mystics,"

by R. A. Vaughan, B.A. (Strahan and Co.), there is prefixed an interesting notice of the author's intellectual development and literary career, from the pen of his son. Of the book itself, which, though never likely to find many readers, can hardly fail to retain its place in theological literature, it is not necessary to speak. It is a monument of industry and learning, directed by sound and sober judgment, and by what is of equal value in the treatment of the subject, a sympathetic and reverent spirit. We must quote the beautiful stanza from one of Mr. Vaughan's own poems, with which the editor has appropriately concluded his preface Let as toil on ; the work we have behind us, Though incomplete, God's hand will 3,rit embalm, And use it some way ; and the news will find us

In heaven above, and sweeten endless calm."

—"The Abridgment of the History of India," by John Clark Marsh. man, C.S.I. (Blackwood and Sons), appears in a "new edition en- larged." "A summary of events from the death of Lord Mayo in 1872 to the close of the year 1879," has been added.—A happy speci- men of the fashion of reproducing old forms of books has reached a second edition,—" Luxurious Bathing," a Sketch by Andrew W. Tner, with eight etchings by Tristram Ellis (Field and Tuer).—We have also to record the appearance of a second edition of a valuable work in the department of Christian apologetics, "The Jesus of the Evangelists : his Historical Character Vindicated. An Examination of the Internal Evidence for Our Lord's Divine Mission, with Refer- ence to Modern Controversy." By Rev. C. A. Row, M.A. (F. Nor- gate).—" The Life and Doctrine of Our Saviour Jesus Christ, by "H. M.," of the Society of Jesus. (Burns and Oates), is a reprint of a book of devotion, written by Henry More, a descendant of Sir Thomas More, at some time in the earlier half of the seventeenth century, and first published at Antwerp in 1649.