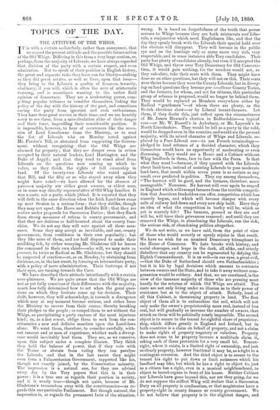 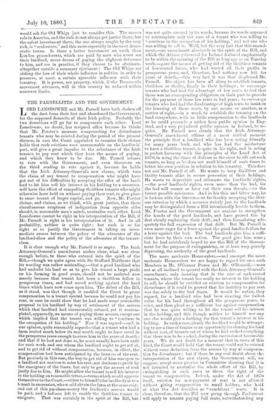 THE ATTITUDE OF THE WHIGS.

IT is with a certain melancholy, rather than annoyance, that we regard the present attitude and the possible future action of the Old Whigs. Differing in this from a very large section, or, perhaps, from the majority of Liberals, we have always regarded that division of the party with a certain respect, and even admiration. Not to speak of their position in English history, the great and separate risks they have run for liberty—staking as they did great estates, as well as lives, upon that issue— they bring to the Liberals a quality of firmness, tenacity, obstinacy, if vou will, which is often the note of aristocratic training, and is sometimes wanting to the rather fluid opinion of democracy. They are a moderating power, com- piling popular tribunes to consider themselves, linking the policy of the day with the history of the past, and sometimes saving the party from ignorant and rash enthusiasms.

hey have done great service in their time, and we are heartily sorry to see them, from a miscalculation alike of their danger and their force, imperilling their considerable position. It is impossible, however, to hear of occurences like the seces- sion of Lord Lansdowne from the Ministry, or to read the list of Liberals who on Monday voted against Mr. Forster's Bill, or abstained from supporting the Govern- ment, without recognising that the Old Whigs are alarmed for property ; that they see danger even in action accepted by their natural leaders, Lord Hartington and the Duke of Argyll ; and that they tend to stand aloof from Liberals on the questions now coming up which in- volve, as they think, the rights of full ownership in land. Of the twenty-two Liberals who voted against that Bill, and the fifty or so who stayed away when they might have voted—we have allowed for the absence of pails—a majority are either great owners, or eldest sons, or in some way directly representative of Old Whig families. It was a caste, not a party, which jibbed. It is reported that they will drift in the same direction when the Irish Land-laws come up next Session in a serious form ; that they dislike, though they may not upset, the Hares and Rabbits Bill ; that they are restive under proposals for Succession Duties ; that they flinch from strong measures of reform in county government, and that they are dubious or half-hearted about the county fran- chise. We do not say they will vote against all these mea- sures. Some they may accept as inevitable, and one, county government, from confidence in their own popularity ; but they like none of them, and are half disposed to make their misliking felt, by either worrying Mr. Gladstone till he leaves the command to their own chiefs—who will, we may note en passant, be twice as Radical as Mr. Gladstone, lest they should be suspected of reaction—or, as on Monday, by abstaining from divisions, or, in the last resort, by forming an intermediate party, with a policy of mere administration. Their footsteps, if not their eyes, are turning towards the Cave.

We have described their attitude intentionally with a certain over-plainness. We are quite aware that the Old Whigs are not as yet fully conscious of their differences with the majority, much less fully determined how to act when the great ques- tions on which they hesitate come up for decision. Their drift, however, they will acknowledge, is towards a divergence which may at any moment become serious, and either force the Ministry to swerve from their course, thereby breaking their pledges to the people ; or compel them to act without the Whigs, so precipitating a party rupture of the most injurious kind ; or, as a last resort, oblige them to seek from the con- stituencies a new and definite mandate upon the Land-laws alone. We want them, therefore, to consider carefully, with- out rancour and as men of experience, whither such a diverg- ence would inevitably lead them. They are, as we conceive, upon this subject under a complete illusion. They think they hold the balance of power, that if they vote with the Tories or abstain from voting they can paralyse the Liberals, and that in the last resort they might even form a Pahnerstonian Government, supported like his, though not exactly joined, by the Conservative minority. The impression is a natural one, for they are advised every day by the Tory papers that this is in their power ; it is a true one as regards their position in society, and it is nearly true—though not quite, because of Mr. Gladstone's tremendous sway with the constituencies—as re- gards this one particular Parliament. But though natural, the impression is, as regards the permanent facts of the situation,

wrong. It is based on forgetfulness of the truth that power accrues to Whigs because they are both aristocrats and Libe-

rals, a conjunction which most Englishmen like, and that the day they openly break with the Liberals their special hold over the electors will disappear. They will become in the public eye and on the hustings only so many more very rich, very respectable, and in some instances able Tory candidates. That party has plenty of candidates already, but even if it accepted the Old Whigs, and threw over Tory Democracy for Old Conserva- tism, it would gain nothing, for the seceders would not, as they calculate, take their seats with them. They might have done so on other questions, but they will not on this. Their seats were theirs because they were the County Liberals, but in diverg- ing on land questions they become par excellence County Tories, and the farmers, for whom, and not for citizens, this particular group of reforms is proposed, would no longer be behind them. They would be replaced as Members everywhere either by Radical "gentlemen "—of whom there are plenty, as the Scotch elections show—or by Liberal tenant-farmers. Let them, if they doubt this, just reflect upon the circumstances of Mr. James Howard's election in Bedfordshire—a typical case—or Mr. W. Russell's in Aylesbury, or Mr. Laycock's in North Lincolnshire. They would be left as a party in the cold, would be dropped even in the counties, and would see the present majority, with its mixed character of Whigs and Liberals, re- placed by a Pure Liberal one—to use French terminology— pledged to land reforms of a decided character, which they themselves would have no opportunity of moderating or even discussing. They would see a House and a Cabinet without Whig landlords in them, face to face with the Peers. Is that what they want ?—because, if they quarrel with the Liberals about land-laws, instead of assisting Liberals to pass moderate land-laws, that result within seven years is as certain as any result ever predicted in politics. They say among themselves„ "The harvest will be good, and the farmers, therefore, more manageable." Nonsense. No harvest will ever again be reaped in England which will exempt farmers from the terrible competi- tion that American freeholders can offer, competition which has scarcely begun, and which will become sharper with every- mile of railway laid down and every new ship built. Have they an idea of what the competition in barley will be, which as yet is scarcely felt? The farmers, pressed as they are and will be, will have their grievances removed ; and until they are removed the Whigs, in abandoning the Liberals, run the risk,. the serious risk, of abandoning politics altogether.

We do not write, as we have said, from the point of view- of those who would secretly or openly rejoice in that result. We have no wish for an unmixed Democracy triumphant in, the House of Commons. We hate breaks with history, and social cleavages, and leaps in the dark, all alike, and utterly disbelieve that any country can be regenerated by defying the Eighth Commandment. It is an evil—in our eyes, a great evil, —that the Duke of Sutherland should own Sutherlandshire ; but it is his by legal decisions which amount to contracts between owners and the State, and to take it away without com- pensation would be robbery. And that, we are convinced, is the view of the immense majority of those who are pressing most hardly for the reforms of which Old Whigs are afraid. The caste are not only living under an illusion as to their power of resistance, but as to the object of attack. Nobody, least of all this Cabinet, is threatening property in land. The first object of them all is to enfranchise the soil, which will not only make the owner's proprietorship more real, instead of less real, but will gradually so increase the number of owners, that attack on them will be politically nearly impossible. The second object is to secure to the tenant his rightful share of proprietor- ship, which differs greatly in England and Ireland, but in both countries is a claim on behalf of property, and not a claim. to make rights of property nugatory or valueless. Property does not cease to be property because a multitude claim it, asking each of them protection for a very small bit. Tenant- right, where it exists, is a limited right of ownership, and just as clearly property, however fractional it may be, as a right to a contingent reversion. And the third object is to secure to the tenant his right to put down or limit nuisances which his landlord may like, but which he has a right to object to, just as a citizen has a right, even in a musical neighbourhood, to object to barrel-organs in front of his house. Neither Cabinet nor Liberals have gone beyond this, nor are they going, for we do not suppose the stiffest Whig will declare that a Succession Duty on all property is confiscation, or that magistrates have a property-right in county finance or county government. We do not believe that property is in the slightest danger, and

would ask the Old Whigs just to consider this. The masses rule in America, and the rich do not always get justice there; but the safest investment there, the one always sought by the very rich, is "real estate," and this more especially in the most demo- cratic towns. Is there a better investment on earth than London ground-rents, which are paid by men who never see their landlord, never dream of paying the slightest deference to him, and are in practice, if they choose to be obstinate, altogether outside a summary ejectment ? The Old Whigs are risking the loss of their whole influence in politics, in order to preserve, at most., a certain agreeable influence with their tenantry. It is power, not property, which, if the Democratic movement advances, will in this country be reduced within narrower limits.