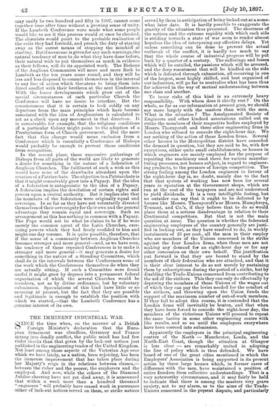 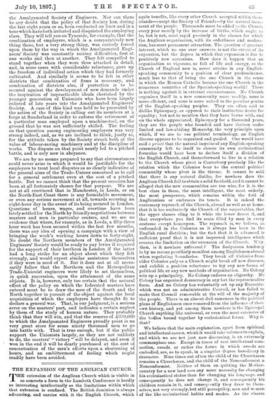 SINCE the time when, on the morrow of a British Foreign Minister's declaration that the Euro- pean firmament was cloudless, Germany and France sprang into deadly conflict, the public mind has had few ruder shocks than that given by the lock-out notices just published in the engineering trades of the United Kingdom. Not least among those aspects of the Victorian Age over which we have lately, as a nation, been rejoicing, has been the immense improvement that has taken place during her Majesty's reign in the relations between classes,— between the richer and the poorer, the employers and the employed. And now, while the echoes of the Diamond Jubilee cheering have not yet died away, it is announced that within a week more than a hundred thousand "engineers" will probably have ceased work in pursuance either of lock-out notices served on them, or strike notices served by them in anticipation of being locked out at a some- what later date. It is hardly possible to exaggerate the gravity of the situation thus presented. The shortness of the notices and the extreme rapidity with which each side is striding towards a state of war seem to render almost hopeless the idea of interposing any effective delays. Yet unless something can be done to prevent the actual outbreak of the conflict, it is hardly too much to say that the whole course of industrial progress will be put back by a quarter of a century. The sufferings and losses which will be entailed, the passions which will be aroused, and the deep resentment that will be kindled on the side which is defeated through exhaustion, all occurring in one of the largest, most highly skilled, and best organised of our industries, will go far to neutralise what has been thus far achieved in the way of mutual understanding between one class and another.

To incur risks of this kind is an extremely heavy responsibility. With whom does it chiefly rest ? On the whole, so far as our information at present goes, we should say more largely with the masters than with the men. What is the situation ? The Amalgamated Society of Engineers and other kindred associations called out on strike the members of their respective bodies employed by Messrs. Thornycroft and three other engineering firms in London who refused to concede the eight-hour day. We say nothing of the action of these London firms. Several other houses in the Metropolitan district have conceded the demand in question, but they are said to be, with few exceptions, either quite small establishments, or houses in which engineers are mainly employed for the purpose of repairing the machinery used there for various manufac- turing processes, not houses subject, in regard to engineer- ing products, to the pressure of foreign competition. The strong feeling among the London engineers in favour of the eight-hour day is, no doubt, mainly due to the fact that that system of working has now been for several years in operation at the Government shops, which are run at the cost of the taxpayers and are not understood to yield dividends. It is a very intelligible feeling, but no outsider can say that it ought to be deferred to by houses like Messrs. Thornycroft's or Messrs. Humphreys, Tennant, and Co.'s, if they believe that to do so would place them at a serious disadvantage in relation to their Continental competitors. But that is not the main. question at issue. The question is whether the federated engineering employers of the country genera.11y are justi- fied in locking out, as they have resolved to do, in weekly instalments of 25 per cent., all the men in their employ who are members of the Unions concerned in the strike against the four London firms, when those men are not making any demand for an eight-hour day or for any other concession on their own behalf. The justification put forward is that they are bound to stand by the members of their federation who are attacked, and that it is their clear interest to do so not merely by sustaining them by subscriptions during the period of a strike, but by disabling the Trade-Unions concerned from contributing to the aid of the strikers. This they can only do effectually by depriving the members of those Unions of the wages out of which they can pay the levies needed for the comfort of the strikers, and throwing upon the Union funds the support of the maximum number of out-of-work members. If they fail to adopt this course, it is contended that the London firms will inevitably be beaten, and that when they have been forced to concede the eight-hour day, the members of the victorious Unions will proceed to repeat the same tactics in some other engineering centre with like results, and so on until the employers everywhere have been coerced into submission.

Apparently the employers in the principal engineering centres of the North — Manchester, Leeds, and the North-East Coast, though the situation at Glasgow is less clear — are remarkably united in adopting the line of policy which is thus defended. We have heard of one of the great cities mentioned in which the Employers' Association is being supported in its present action by three large houses which, in former cases of difference with the men, have maintained a position of entire freedom from collective understandings. That is a very noteworthy circumstance, and it may fairly be held to indicate that there is among the masters very grave anxiety, not to say alarm, as to the aims of the Trade.. Unions concerned in the prgaent dispute, and particularly. the Amalgamated Society of Engineers. Nor can there be any doubt that the policy of that Society has, during the last eight years or so, been conducted on lines and in a tone which have both irritated and disquieted the employing class. They will tell you on Tyneside, for example, that the combination of employers, which is a comparatively new thing there, but a very strong thing, was entirely forced upon them by the way in which the Amalgamated Engi- neers' Society was constantly raising difficulties, first at one works and then at another. They felt compelled to stand together when they were thus attacked in detail, and, in some cases with considerable reluctance, gave up the freedom of individual action which they had formerly cultivated. And similarly it seems to be felt in other districts that combination of firms is necessary, and combination of districts also, if protection is to be secured against the development of new demands under the inspiration of impracticable ideals cherished by the ,younger generation of Unionists who have been largely enlisted of late years into the Amalgamated Engineers' Society. A case of this kind was held to be presented by the action of the Society in calling out its members at a forge at Sunderland in order to enforce the retirement of a particular man employed upon a machine-tool, on the ground that he was not sufficiently skilled. The feeling on that question among engineering employers was very strong indeed, and, as we are inclined to think, justly so, for the attitude taken by the Society struck both at the value of labour-saving machinery and at the discipline of works. The dispute on that point nearly led to a pitched battle, and is only now in abeyance.

We are by no means prepared to say that circumstances could never arise in which it would be justifiable for the employers to treat local disputes as so clearly indicative of the general aims of the Trade-Unions concerned as to call for a general settlement even at the cost of a pitched battle. But we cannot think that the present occasion has been at all fortunately chosen for that purpose. We are not at all convinced that in Manchester, in Leeds, or on the North-East Coast there is any formidable movement, or even any serious movement at all, towards securing an eight-hour day in the event of its being secured in London. Questions of hours, wages' and overtime have been lately settled for the North byfriendlynegotiations between masters and men in particular centres, and we see no evidence that where, for example, as in Leeds, a fifty-three hour week has been secured within the last few months, there was any idea of opening a, campaign with a view of bringing the week's working hours down to forty-eight. No doubt the Northern members of the Amalgamated Engineers' Society would be ready to pay levies if required for the support of their brethren in London if the latter had a long strike for an object about which they felt strongly, and would expect similar assistance themselves if they were in need of it. But it does not at all neces- sarily follow that the Northern and the Metropolitan Trade-Unionist engineers were likely to set themselves, in quick succession, upon the attainment of the same objects. It is, however, only too certain that the natural effect of the policy on which the federated masters have entered must be to draw the men of the South and the North together in pursuit of the object against the local acquisition of which the employers have thought fit to declare a general war. That, in our judgment, is a serious error on the masters' part, and indicates a certain neglect by them of the study of human nature. They probably think that they will win, and that the reserve of .2350,000 to which the Amalgamated Engineers proudly point is no very great store for some ninety thousand men to go into battle with. That is true enough, but if the public support the Unionists largely, as they are not unlikely to do, the masters' " victory " will be delayed, and even if won in the end it will be dearly purchased at the. cost of concentration of the men's efforts upon a shortening of hours, and an embitterment of feeling which might readily have been avoided.