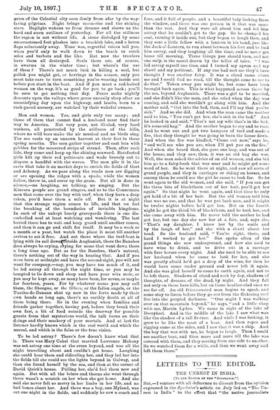 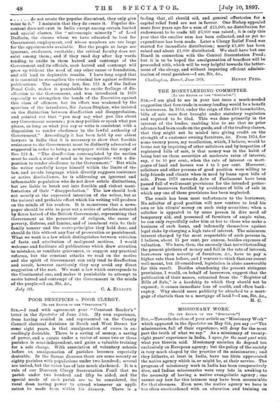 THE UNREST IN INDIA.

[TO THIN EDITOR ON TEl " EPNCTATOR."]

SIR,-I venture with all deference to dissent from the opinion expressed in the Spectator's article on July 3rd on "The Un- rest in India" to the effect that "the native journalists

do not create the popular discontent, they only give woke to it." I maintain that they do create it. Popular dis- content does not exist in India except among certain limited and special classes, the "microscopic minority" of Lord Dufferin, the classes whom we have educated to look for Government employment, and whose numbers are too large for the appointments available. But the people at large are ignorant, credulous, excitable ; the critical faculty does not exist among them ; and if they read day after day words tending to excite in them hatred and contempt of the Government and its officials, such hatred and contempt will grow up without the need of any other cause or foundation, and will lead to deplorable results. I have long urged that it is essential to strengthen the criminal law against seditious publications. The existing law, Sec. 124 A of the Indian Penal Code, makes it punishable to excite feelings of dis- affection to the Government, and was introduced in 1870 especially to strengthen the hands of the Executive against this class of offences, but its effect was weakened by the speeches of the introducer, Sir James Stephen, who insisted on the distinction between disaffection and disapprobation, and pointed out that "you may say what you like about any Government measure ; you may publish or speak what you please, so long as what you say or write is consistent with a disposition to render obedience to the lawful authority of Government." Accordingly it has been held by our ablest lawyers in India that it is necessary to show that forcible resistance to the Government must be distinctly advocated or suggested in order to bring a newspaper within the scope of Sec. 124 A. "The disaffection contemplated by the section must be such a state of mind as is incompatible with a dis- position to render obedience to the Government." But while the writer carefully keeps himself within the limits of the law, and avoids language which directly suggests resistance or active disobedience, he is addressing an ignorant and inflammable population who do not draw subtle distinctions, but are liable to break out into forcible and violent mani- festations of their "disapprobation." The law should look not merely at the expressed intention of the writer, but at the natural and probable effect which his writing will produce on the minds of his readers. It is monstrous that a news- paper should be able to pour out a series of articles actuated by fierce hatred of the British Government, representing that Government as the persecutor of religion, the cause of poverty, distress, and famine, and of imminent ruin to their family honour and the caste-principles they hold dear, and should do this without any fear of prosecution or punishment. What we want is a law which distinguishes between criticism of facts and attribution of malignant motives. I would welcome and facilitate all publications which draw attention to mistakes, or ventilate grievances, or suggest any practical reforms, but the constant attacks we read on the motive and the spirit of Government can only tend to disaffection and revolt, however cautiously they may avoid any direct suggestion of the sort. We want a law which corresponds to the Continental one, and makes it punishable to attempt to excite hatred and contempt of the Government in the minds of the people.—I am, Sir, &c.,