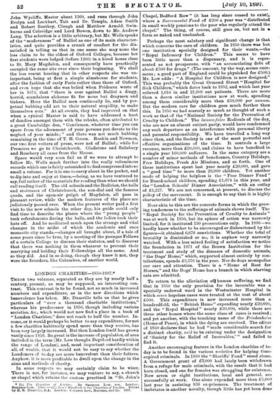 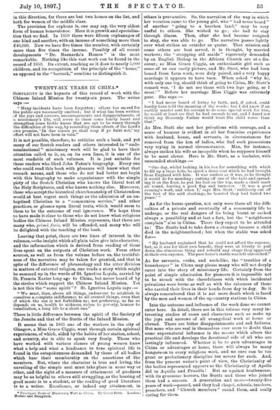 THESE two volumes, separated as they are by nearly half a century, present, as may be supposed, an interesting con- trast. This contrast is to be found, not so much in increased numbers and expenditure, as in the new directions which benevolence has taken. Mr. Domville tells us that he gives particulars of "over a thousand charitable institutions," whereas his predecessor in 1850, though including various societies, &c., which would not now find a place in a book of "London Charities," does not reach to half the number. In- come, or it would perhaps be better to say expenditure, for not a few charities habitually spend more than they receive, has been very largely increased. But then London itself has grown vastly since 1850. So great is the increase of population, of area included in the term (Mr. Low thought Deptford hardly within the range of London), and, most important consideration of all, of wealth, that it would not be easy to say whether the Londoners of to-day are more benevolent than their fathers. Anyhow, it is more profitable to dwell upon the change in the aims and methods of charity.

In some respects we may certainly claim to be wiser. There is not, for instance, we may venture to say, a church or chapel which retains the custom practised in "St. John's

• (L) The Charities of London. By Sampson Low. sen. London: Saraon Low. 10I—(2., Loa's Handbook to the Charities of London. &livid by H. B. Doraville, B.A. London: SAmpson Low, Marston. and Om 1897. Chapel, Bedford Row" (it has long since ceased to exist), where a Sacramental Fund of £200 a year was "distributed in small weekly pensions to the poor who regularly attend the chapel." The thing, of course, still goes on, bat not in a form so naked and unabashed.

Perhaps the most salutary and significant change is that which concerns the care of children. In 1850 there was but one institution specially designed for their wants,—the "Royal Infirmary for Children." This seems to have been little more than a dispensary, and it is repre- sented as not prosperous, with "an accumulating debt of about 2500 for drugs." (The amount, by the way, seems enor- mous; a good part of England could be physicked for £500.) Mr. Low adds : "A Hospital for Children is now designed." This was probably the Great Ormond Street "Hospital for Sick Children," which dates back to 1852, and which last year relieved 1,616 in and 21,808 out patients. There are more than a dozen similar institutions now at work, spending among them considerably more than £50,000 per annum. But the modern care for children goes much further than this. In 1850 we had scarcely so much as thought of such a work as that of the "National Society for the Prevention of Cruelty to Children." The laissez-faire Radicals of the day, who are now an almost extinct party, would have condemned any such departure as an interference with personal liberty and parental responsibility. We have travelled a long way since then, and the Society is one of the most powerful and effective organisations of the time. It controls a large revenue, more than £50,000, and claims to have benefited in a single year 160,000 sufferers. In the same category are a number of minor methods of beneficence, Country Holidays, Free Holidays, Fresh Air Missions, and so forth. One of these institutions spent last year nearly 220,000, and gave a "good time" to more than 28,000 children. Yet another mode of helping the helpless is the "Free Dinner Fund" for Board-school children, spending £1,074 in this year, and the "London Schools' Dinner Association," with an outlay of £1,227. We are not concerned, at present, to discuss the policy of the movement. It is enough to say that it is highly characteristic of the time.

Near akin to this are the concrete forms in which the grow- ing tenderness to the sufferings of animals shows itself. The "Royal Society for the Prevention of Cruelty to Animals" was at work in 1850, but its sphere of action was narrowly limited, for it instituted 150 prosecutions only. In 1896—we hardly know whether to be encouraged or disheartened by the figures—it obtained 6,676 convictions. Whether the total of brutality is diminished or no, it is anyhow very narrowly watched. With a less mixed feeling of satisfaction we notice the foundation in 1871 of the Brown Institution for the treatment and study of the diseases of domestic animals, "the Dogs' Home," which, supported almost entirely by con- tributions, spends £3,576 in the year. Nor do dogs monopolise our care and attention. There is a "Home of Rest for Horses," and the Dogs' Home has a branch in which starving cats are admitted.

To return to the alleviation off human suffering, we find that in 1850 the only provision for the incurable was a specially endowed ward in the Westminster Hospital in which seven hopeless cases were treated at the cost of about £500. This expenditure is now increased more than a hundredfold, the "British Home" expending nearly £20,000, and the "Royal Hospital" nearly £30,000, while there are three other homes where the same class of cases is received ; and yet another, with the touching name of the Friedenheim (Home of Peace), in which the dying are received. The editor of 1850 declares that he had "made considerable search for a distinct charity, said to be existing under the designation of 'Society for the Relief of Incurables,'" and failed to find it.

Another encouraging feature in the London charities of to- day is to be found in the various societies for helping time- expired criminals. In 1850 the "Sheriffs' Fund" stood alone. A Government grant of £3,000 had lately been withdrawn from a refuge for male criminals, with the result that it had been closed, and one for females was struggling for existence. Now seven or eight institutions, local and general, are successfully at work. One alone expended more than 25,000 last year in assisting 836 ex-prisoners. The treatment of inebriates is another novelty, though little has yet been done in this direction, for there are but two homes on the list, and both for women of the middle class.

The provision for orphans is, one may say, the very oldest form of human benevolence. Here it is growth and specialisa- tion that we find. In 1850 there were fifteen orphanages of one kind and another, with an income of something more than £40,000. Now we have five times the number, with certainly more than five times the income. Possibly of all recent developments "Dr. Barnardo's Homes" is the most remarkable. Nothing like this vast work can be found in the record of 1850. Its extent, reaching as it does to nearly 5,000 children, and its recognition of the principle of the "home." as opposed to the "barrack," combine to distinguish it.