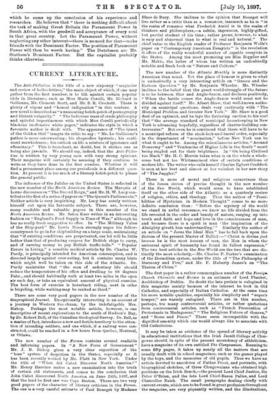 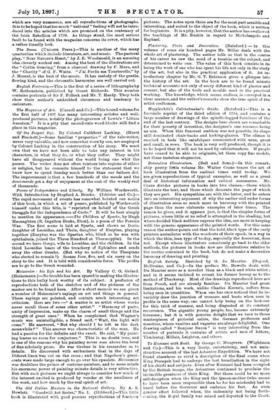 The Anti-Philistine is the title of a new sixpenny "magazine and review of belles-lettres," the main object of which, if one may gather from the first number, is to tilt against certain popular idols in literature, such as Miss Marie Corelli, Mr. Richard le Gallienne, Mr. Clement Scott, and Mr. S. R. Crockett. There is plenty of vigour and "honest indignation" in this venture. A new novel is described as "a nauseating hotch-potch of pornography and blatant vulgarity." "The ludicrous mass of crude philosophy and spiteful impertinences with which Miss Corelli periodically blackens inoffensive white paper," indicates the style in which a favourite author is dealt with. The appearance of "The Quest of the Golden Girl" tempts its critic to say : "Mr. Le Gallienne's pathos is more caterwauling ; his rhapsodies hysteria ; his senti- ment mawkishness ; his outlook on life a mixture of ignorance and effeminacy." This is trenchant, no doubt, but it strikes one as being also juvenile. We should say, indeed, that the Anti-Philis- tine is written by very young men with very strong opinions. Their magazine will certainly be amusing if they continue to write as they have done in the first number. Whether it will find a permanent place among our periodicals is a different ques- tion. At present it is too much of a literary hotch-potch to please the general public.

The influence of the Jubilee on the -United States is reflected in the new number of the North American Review. The Marquis of Lorne discourses on "The Record Reign," and Mr. H. W. Lucy con- tributes the first of a series of papers on "The Queen's Parliaments." Neither article is very inspiriting. Mr. Lucy has surely written himself out upon his favourite subject. There are, however, many readable and valuable papers in this number of the North American Review. Mr. Seton Karr writes in an interesting fashion on "England's Food Supply in Time of War," although he has no really fresh suggestion to offer. In "The Military Value of the Ship-yard" Mr. Lewis Nixon strongly urges his fellow- countrymen to go in for shipbuilding on a large scale, maintaining that "if existing conditions are perpetuated, our lot will be little better than that of producing cargoes for British ships to carry, and of earning money to pay British traffic-tolls." "Popular Errors in Living," a sensible medical article by Dr. Charles W. Purdy, is principally intended for American consumption, and is directed largely against over.eating, but it contains many hints which might well be taken on this side of the Atlantic. Dr. Purdy maintains that "the man of sedentary life should reduce the temperature of his office and dwelling to 68 degrees Fahr., and should habitually walk at least two miles in the open air each day, or take an equivalent amount of physical exercise. The best form of exercise is horseback riding, next in order is bicycling, while walking may be ranked as third."

There are some very good papers in the new number of the Geographical Journal. Exceptionally interesting is an account of a journey in Western Sze chuan, by the indefatigable Mrs. Bishop. Perhaps the most notable article, however, is one descriptive of recent explorations to the south of Hudson's Bay, by Dr. Robert Bell, of the Canadian Geological Survey. Dr. Bell, as a matter of fact, introduces a new and fertile territory to the atten- tion of intending settlers, and one which, if a railway were con- structed, could be reached in a few hours from Quebec, Montreal, or Ottawa.

The new number of the Forum contains several readable and informing papers. In "A New Form of Government" Mr. J. B. Bishop gives a very clear exposition of the " boss " system of despotism in the States, especially as it has been recently worked by Mr. Platt in New York. Under the title of "When did Cabot Discover North America?" Mr. Henry Harrisse makes a new examination into the truth of certain old statements, and comes to the conclusion that John Cabot discovered North America on June 24th, 1497, and that the land he first saw was Cape Breton. There are two very good papers of the character of literary criticism in the Forum. The one is a very careful estinote of Paul Bourget by Madame Blaze de Bury. She inclines to the opinion that Bourget will live rather as a critic than as a romancer, inasmuch as he is "in the realm of romance what Frederick Amiel is in the realm of thinkers and philosophers,---a subtle, ingenuous, highly-gifted, but partial student of his time ; rather prone, however, to what is easy and abnormal than to what is real and natural." The chief value to the English reader of Professor Benjamin Wells's paper on "Contemporary American Essayists" is the revelation it offers of the really wonderful number of capable essayists in the States. Among the most promising are Miss Repplier and Mr. Mabie, the latter of whom has written an undoubtedly notable and fresh book on "Nature and Culture."

The new number of the Atlantic Monthly is more distinctly American than usual. Yet the place of honour is given to what is undoubtedly a very interesting article on "Greece and the Eastern Question" by Mr. Benjamin Wheeler. Mr. Wheeler inclines to the belief that the great world-struggle of the future is to be between Slav and Anglo-Saxon, and declares positively, "When the battle comes the Anglo-Saxon world must not be divided against itself." Mr. Albert Shaw, that well-known autho- rity on municipal questions, deals very cautiously with "The Municipal Problem and Greater New York." Mr. Shaw is a good deal of an optimist, and he lays the flattering unction to his soul that "the average standard of municipal housekeeping in New York is advancing hopefully, regardless of charter-building con- troversies." But even he is convinced that there will have to be a municipal reform of the stock-lock-and-barrel order, especially in the department of "nomination," before New York can be what it ought to be. Among the miscellaneous articles, " Around Domremy " and "Tendencies of Higher Life in the South" merit being singled out for their brightness. In "On being Civilised too Much" Mr. H. C. Mervin takes what is on the whole a whole- some but not too Whitmaniacal view of certain conditions of modern life. The writer who calls herself Charles Egbert Craddock is seen at her best and almost at her weirdest in her new story of 'The Juggler."

There is more of moral and religions earnestness than of the lumen Mecum of precise thought in the new number of the New World, which would seem to have established itself on the other side of the Atlantic as a quarterly review of religion, ethics, and theology. Thus the author of "Possi- bilities of Mysticism in Modern Thought" comes to no more definite conclusion than : "Before the mystery of the world we stand in awful reverence, we know no life divided from the life revealed in the order and beauty of nature, surging up into truth and faith and hope and love in the consciousness of man, and because there is a spirit in man the inspiration of the Almighty giveth him understanding.' " Similarly the author of an article on "Jesus the Ideal Man" has to fall back upon the dictum of the present Master of Balliol :—" Christ is divine just because he is the most human of men, the Man in whom the universal spirit of humanity has found its fullest expression." The two best articles in the New World are the two that are dis- tinctly the most scholarly,—Mr. Charles P. Parker's examination of the Heraclitan system, under the title of "The Philosophy of Harmony and Fire," and Mr. F. Huberty James's on "The Theism of China."

The first paper in a rather commonplace number of the Foreigs% Church Chronicle and Review is an estimate of Lord Plunket, Archbishop of Dublin. No doubt the late prelate is eulogised in this magazine mainly because of the interest he took in Old Catholics, and especially of Italian Catholics. At the same time his more notable qualities, especially his simplicity and "superb temper," are warmly eulogised. There are in this number, perhaps, too many controversial articles, or rather quotations from controversial articles, such as "French Prosecution of Protestants in Madagascar," "The Religious Future of Geneva," and "Rome and Peace." These seem incompatible with the dignified amenity which one would always like to associate with Old Catholicism.

It may be taken as evidence of the spread of literary activity in educational institutions that the Irish Jesuit College of Clon- gowes should, in spite of the present ascendency of athleticism, have a magazine of its own entitled The Clonyournian. Running to some fifty pages, it takes up nearly all the matters that are usually dealt with in school magazines, such as the games played by the boys, and the memories of old pupils. Thus we have an article devoted to anecdotes of Father Prout, and portraits, with biographical sketches, of three Clongowuians who obtained high positions on the Irish Bench,—the present Lord Chief Justice, Sir Peter O'Brien, and the late Lord Chief-Baron Palles, and Lord Chancellor Naish. The small paragraphs dealing chiefly with current events, which are to be found in great profusion throughout the magazine, are very piquantly written, and the illustrations, which are very numerous, are all reproductions of photographs. It is to be hoped that too much" national" feeling w in not be intro- duced into the articles which are promised on the centenary of the Irish Rebellion of 1798. As things stand, the most serious fault to be found with the magazine concerns its cover, which has a rather tinselly look.