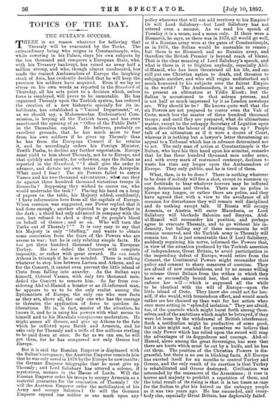 THE SULTAN'S SUCCESS. THERE is no reason whatever for believing that Thessaly will be evacuated by the Turks. The extraordinary being who reigns in Constantinople, who, while cowering in his Palace, slays his own subjects by the ten thousand and conquers a European State, who, with his Treasury bankrupt, has raised an army half a million strong, and who, though almost uneducated, has made the trained Ambassadors of Europe the laughing stock of Asia, has evidently decided that he will keep the province his soldiers have acquired. Even if we lay no stress on his own words as reported in the Standard of Thursday, all his acts point to a decision which, unless force is employed, will prove to be immutable. He has organised Thessaly upon the Turkish system, has ordered the creation of a new bishopric specially for its in- habitants, has established a " Vacouf Department," or, as we should say, a Mahommedan Ecclesiastical Com- mission, is levying all the Turkish taxes, and has even sanctioned the opening of an "Office of the Public Debt" in the Thessalian capital. He believes, probably on excellent grounds, that he has much more to fear from his own soldiers if he gives up Thessaly than he has from the European Concert if he retains it, and he accordingly orders his Foreign Minister, Tewfik Pasha, to decline any further negotiation. Europe must yield to him about Thessaly, not he to Europe, and that quickly and openly, for otherwise, says the Sultan as reported in the Standard, "'I shall give the order to advance, and dictate my own terms from the Acropolis. What need I fear ? The six Powers failed to coerce Vassos and his two thousand adventurers ; what can they do against three hundred thousand victorious troops in Roumelia ? Supposing they wished to coerce me, who would undertake the task ? ' Placing his hand on a heap of papers on the table, his Majesty added, confidently, I have information here from all the capitals of Europe. When coercion was suggested, one Power replied that it had done enough ; another objected to go any farther in the dark ; a third had only advanced in company with the rest, but refused to shed a drop of its people's blood on behalf of Greece ; and so on. Who will turn the Turks out of Thessaly ? ' " It is very easy to say that his Majesty is only "bluffing," and wants to obtain some concession from the fears of the Powers who are averse to war ; but he is only relating simple facts. He has got three hundred thousand troops in European Turkey. He has defied the Concert with complete impunity, or rather with great reward. He can reach Athens in triumph if he is so minded. There is nothing whatever to stop him between Larissa and Athens, and as for the Concert, it cannot even prevent the little island of Crete from falling into anarchy. As the Sultan says himself, Colonel Vassos, with only two thousand men, defied the Concert to remove him. So far from con- sidering Abd-ul-Hamid a boaster or an ill-informed man, he appears to us to be the only realist among the diplomatists of Europe, the only one who sees facts as they are above all, the only one who has the courage to threaten the application of force to quicken de- liberations. He is, in fact, master of the situation, he knows it, and he is using his powers with what seems to himself and to his Marshals conspicuous moderation. He might annex all Greece, and give up Athens to the fate which he inflicted upon Batuk and Armenia, and he asks only for Thessaly and a trifle of five millions sterling to be paid down at once. So far as we can see, he will get them, for he has conquered not only Greece but Europe.

But it is said the Russian Emperor is displeased with the Sultan's arrogance; the Austrian Emperor reminds him that he was only saved in 1878 by the Europe he now insults; the German Emperor telegraphs that he must give up Thessaly ; and Lord Salisbury has uttered a solemn, if raystenous, menace in the House of Lords. Will the Russian. Emperor order his troops to occupy Armenia as a material guarantee for the evacuation of Thessaly ? Or will the Austrian Emperor order the mobilisation of his Army and occupy Salonica ? Or will the German Emperor expend one soldier or one mark upon any policy whatever that will not add territory to his Empire P Or will Lord Salisbury—but Lord Salisbury has not uttered even a menace. As we read his speech of Tuesday it is a moan, and a moan only. If there were a. Bismarck, he says, as there was in 1878, all would go well,. or if a Russian army were at the gates of Constantinople, as in 1878, the Sultan would be amenable to reason ; but there is no Bismarck and no Russian army, and therefore the British Premier is beyond reach of blame. That is the clear meaning of Lord Salisbury's speech, and what is there in it to frighten anybody, especially Abd- ul-Harnid, who has been threatened all his life, and can still put one Christian nation to death, and threaten to subjugate another, and who still reigns undisturbed and much honoured by his subjects over the fairest Empire in the world ? The Ambassadors, it is said, are going to present an ultimatum at Yildiz Kiosk; but the Sultan is accustomed to that solemn process, and is not half so much impressed by it as London newsboys are. Why should he be? He knows quite well that the six Powers are not prepared to coerce even the Vali of Crete, much less the master of three hundred thousand troops ; and until they are prepared, what do ultimatums matter, except to the unhappy Secretary of Legation upon whom devolves the labour of drawing them up ? People talk of an ultimatum as if it were a decree of Court, whereas it is nothing but a lawyer's letter threatening an. appeal to a Tribunal which has in advance determined not to act. The only man of action at Constantinople is the Sultan, who lays his thin hand upon his scimitar, remarks that he has three hundred thousand men under arms, and with every mark of restrained contempt, declines to waste his time any longer upon the Ambassadors of Europe. They only gabble, and he is tired of them.

What, then, is to be done ? There is nothing whatever to be done if nobody will fire a shot, except to summon up our fortitude to bear whatever horrors may be inflicted upon Armenians and Greeks. There are no police in Europe any longer, or rather there are police, and they have agreed that with a view to the avoidance of all occasion for disturbance they will remain well disciplined. and do nothing except talk. If Russia will occupy Armenia, or Austria will enter Macedonia, or Lord Salisbury will blockade Salonica and Smyrna, Abd- ul-Hamid will reconsider his position, and perhaps agree to evacuate Thessaly, and to go without his in- demnity, but failing any of these movements he will remain unmoved, and the Turkish army in Thessaly will remain too. It is just conceivable that if Lord Salisbury, suddenly regaining his nerve, informed the Powers that, in view of the situation produced by the Turkish assertion of independence, Great Britain, to avoid participation in. the impending defeat of Europe, would retire from the Concert, the Continental Powers might reconsider their policy and consent to sharp measures of coercion. They are afraid of new combinations, and by no means willing- to release Great Britain from the withes in which they have so successfully bound her, that she cannot even. enforce her will — which is supposed all the while to be identical with the will of Europe—upon the little island of Crete. They know she could act for her- self, if she would, with tremendous effect, and would much rather see her chained up than wait for her action when once more sitting in "splendid isolation." They are afraid, too, of the quarrels which might burst forth among them- selves, and of the ambitions which might be betrayed, if they were let loose by the withdrawal of British interference. Such a notification might be productive of some good, but it also might not, and for ourselves we believe that the only Power which has relied upon the sword will reap the advantages of its doggedness and courage. Abd-ul- Hamid, alone among the great Sovereigns, has seen that there are knots which must be cut by a knife, and he has cut them. The position of the Christian Powers is dis- graceful, but there is no use in blinking facts. All Europe has exerted itself for six months to control Turkey and Greece, and the only result of its exertion is that Turkey is rehabilitated and Greece destroyed. Civilisation was astounded by the massacres of the Armenians ; it rose in horror and majesty to prohibit a repetition of them, and the total result of its rising is that it is ten times as easy for the Sultan to glut his hatred on the unhappy people as it was two years ago. He has succeeded, and every- body else, especially Great Britain, has deplorably failed.