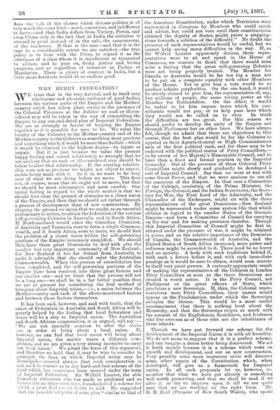 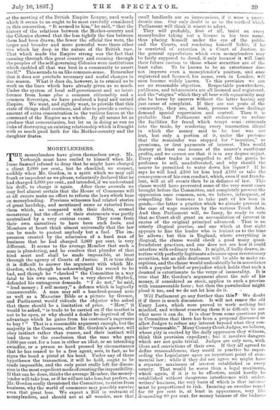 WE trust that in the very natural, and in itself very wholesome and pleasant, outburst of good feeling between the various parts of the Empire and the Mother- country which has taken place owing to the presence of the Colonial Premiers at the Jubilee no rash or ill-con- sidered step will be taken in the way of committing the Empire to any cut-and-dried plan of Imperial Federation. We are as strongly in favour of keeping the Empire together as it is possible for men to be. We value the loyalty of the Colonies to the Mother-country and of the Mother-country to the Colonies as something most precious and something which it would be more than foolish—which it would be criminal in the highest degree—to injure or impair. But it is just because we value the present happy feeling and sound relationship so strongly that we are anxious that no rash or ill-considered step should be taken to alter that relationship. If the existing relation- ship were not so precious we might not object to experi- ments being made with it. As it is, we want to be very sure of what we are doing before we move. This does not, of course, mean that we ought not to move, but that we should be most circumspect and most careful. Our initial feeling in regard to the whole matter is that we should first clear the ground of obstacles to a closer union of the Empire, and then that we should act rather through a process of development than of new construction. By .clearing the ground we mean that we ought, as an essential preliminary to action, to obtain the federation of the various self-governing Colonies in Australia and in South Africa. If Newfoundland would enter the Canadian Dominion, if Australia and Tasmania were to form a single Common- wealth, and if South Africa were to unite, we should find the problem of a closer union within the self-governing Portions of the Empire immensely simplified. We should then have three great Dominions to deal with plus the smaller but very important community of New Zealand ; for New Zealand is too far distant from Australia to make it advisable that she should enter the Australian Commonwealth. When this process of consolidation has been completed, and the self-governing portions of the Empire have been resolved into three great factors and one smaller one—and we trust that the process will not be a long one—we shall be in a far better position than we are at present for considering the best method of bringing about Imperial union,—i.e., a union between the Mother-country and each of the above-mentioned factors and between those factors themselves.

It has been said, however, and said with truth, that the cause of Federation in Australia and South Africa will be greatly helped by the feeling that local federation and union will be a step to Imperial union. The Australian and South African communities, it is argued, will say :- 'We are not specially anxious to alter the status quo in order to bring about a local union. If, however, we can feel that local union will bring about Imperial union, the matter wears a different com- plexion, and we are given a very strong incentive to carry out local union.' We admit the force of this argument, and therefore we hold that it may be wise to consider in principle the lines on which Imperial union may be developed,—granted always that such consideration is not used to commit us to any hard-and-fast scheme of the kind which has sometimes been mooted under the term of Imperial Federation. Sir Wilfrid Laurier, the able Canadian statesman who has made so profound and so favourable an impression here, foreshadowed a scheme for which a great deal can no doubt be said. He suggested that the possible adoption of some plan "similar to that of the American Constitution, under which Territories were represented in Congress by Members who could speak and advise, but could not vote until their constituencies attained the dignity of States, might prove a stepping- stone towards a solution of the difficulty." No doubt the presence of such representatives would be useful, but we cannot help seeing many difficulties in the way. If, as Sir Wilfrid Laurier apparently desires, these repre- sentatives were to sit and speak in the House of Commons, we venture to think that there would soon arise a feeling that the great self-governing Colonies were not being properly treated. The Member for Canada or Australia would be far too big a man not to be put on a complete equality with other Members of the House. Yet to give him a vote would be to produce infinite perplexities. On the one hand, it would be utterly absurd to give him, the representative of, say, five millions of people, the same voting power as the Member for Rutlandshire. On the other, it would be unfair to let him impose taxes which his con- stituents would not pay, or to help pass laws which they would not be called on to obey. In truth the difficulties are too great. For this reason we should prefer to develop the unity of the Empire not through Parliament but on other lines. We have always felt, though we admit that there are objections to this course, that the best plan would be for the Colonies to appoint as their Agents-General or High Commissioners men of the first political rank, and for these men to be endowed with the political status of Privy Councillors,— to be sworn of her Majesty's Honourable Council, and to have thus a fixed and formal position in the Imperial hierarchy. Out of the presence of these Colonial Privy Councillors might slowly and gradually be developed a sort of Imperial Council. Say that we were at war with some Great Power, and that we were anxious to use all the resources of the Empire. In that case a Committee of the Cabinet, consisting of the Prime Minister, the Foreign, the Colonial, and the Indian Secretaries, the Secre- tary for War, the First Lord of the Admiralty, and the Chancellor of the Exchequer, might sit with the three representatives of the great Dominions—New Zealand might be represented under some system like that which obtains in regard to the smaller States of the German Empire—and form a Committee of Council for carrying on the war and for making provision therefor. Though this Imperial Committee of Council might be first in- stituted under the pressure of war, it might be retained in peace, and as the relative importance of the Dominion of Canada, the Commonwealth of Australia, and the United States of South Africa increased, more power and influence might be accorded to it. There need be no hurry and no anxiety. A body with such traditions behind it, with such a future before it, and with such immediate prestige as it would be sure to obtain, would soon accrete to itself very great powers. A curiously appropriate result of making the representatives of the Colonies in London Privy Councillors as soon as the three Dominions are created is worth notice. It is the Privy Council, not Parliament or the great officers of State, which proclaims a new Sovereign. If, then, the Colonial repre- sentatives were Privy Councillors, their names would appear on the Proclamation under which the Sovereign occupies the throne. This would be a most useful announcement that there is nothing local about the Monarchy, and that the Sovereign reigns as much with the consent of the Englishmen, Scotchmen, and Irishmen who live over-sea as of those who are the inhabitants of these islands.

Though we have put forward our scheme for the development of the Imperial Union it is with all humility. We do not mean to suggest that it is a perfect scheme, and can imagine a dozen better being discovered. We set it forth mainly because it is a scheme which rests on growth and development, and not on new construction. Very possibly some more ingenious critic will discover some other aspect of the Constitution which, when developed, will give us a framework for Imperial union. In all such proposals let us, however, re- member that what we have got already is something well worth preserving, and that we shall be mad if we alter it or try to improve upon it till we are quite sure that we are working on the right lines. Mr. G. H. Reid (Premier of New South Wales), who spoke at the meeting of the British Empire League, used words which it seems to us ought to be most carefully considered in this connection. "It seemed to him," he said, "that the history of the relations between the Mother-country and the Colonies showed that the less tightly the ties between them had been drawn, the fewer the official ties were, the larger and broader and more powerful were those other ties which lay deep in the nature of the British race. That which made the Empire strong was the fact that running through this great country and running through the peoples of the self-governing Colonies were institutions which enabled all that was best in a community to assert itself." This sounds to us like common-sense. Remember that it does not preclude necessary and useful changes in due season. What it does do, however, is to remind us to work on the lines which have already given us so much. Under the system of local self-government and no inter- ference from home plus a common citizenship and a common Sovereign, we have produced a loyal and united Empire. We want, and rightly want, to provide that this state of things shall continue, and also to provide a certain amount of extra concentration in the various forces at the command of the Empire as a whole. By all means let us produce that concentration, but let us in doing so run no risks of destroying an existing relationship which is fraught with so much good both for the Mother-country and the daughter States.