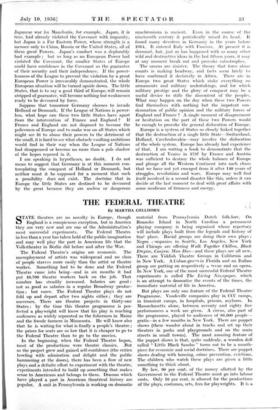 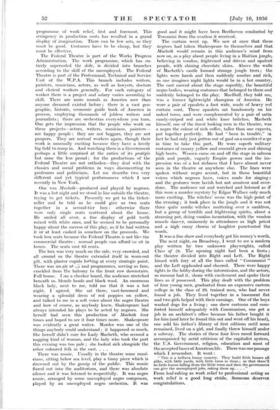 By MARTHA GELLHORN STATE theatres are no novelty in Europe, though England is a conspicuous exception, but in America they_ are very new and are one of the Administration's most successful experiments. The Federal Theatre in less than a year has taken hold of the public imagination and may well play the part in American life that the Volkstheater in Berlin did before and after the War.

The Federal Theatre's origins are economic. The unemployment of artists was widespread and no class of people starves more easily than the artist or theatre worker. Something had to be done and the Federal Theatre came into being—and in six months it had put 10,700 theatre workers back on the job. That number has steadily increased. Salaries are good : not as good as salaries in a regular Broadway produc- tion ; but surer. The Federal Theatre plays do not fold up and depart after two nights either ; they are successes. There are theatre projects in thirty-one States : by the time this theatre programme is per- fected a playwright will know that his play is reaching audiences as widely separated as the fishermen in Maine and the Swede farmers in Minnesota. He will know also that he is writing for what is finally a people's theatre ; the prices for seats are so low that it is cheaper to go to the Federal Theatre than to go to the movies.

In the beginning, when the Federal Theatre began, most of the productions were theatre classics, But as the project grew, and gained. self-confidence. (the critics howling with admiration and delight and the public hammering at the doors), there has been a flow of new plays and a definite effort to experiment with the theatre, experiments intended to build up something that makes sense to Americans and belongs to them. Dramas which have 'played a part in American theatrical history are popular. A unit in Pennsylvania is working on dramatic material from Pennsylvania Dutch folk-lore. On Roanoke Island in North Carolina a permanent playing company is being organised whose repertory will include plays built from the legends and history of that place. Racial groups are doing their own plays : Negro ..1mpanies in. Seattle, Los Angeles, New York and Chicago are offering Walk Together Chillun, Black Empire, Conjure, Man Dies—and these plays are all new. There are Yiddish Theatre Groups in California and in New York. A Cuban grcein in Florida and an Italian group are putting on respectively -n revue and an opera. In New York, one of the most successful Federal Theatre experiments is called The Living Newspaper, which is an attempt to dramatise the events of the times, the immediate material of life in America.

But plays are only one feature of the Federal Theatre Programme. Vaudeville companies play in CCC camps, in transient camps, in hospitals, prisons, asylums. In Massachusetts alone, between seventy and eighty free performances a week are given. A circus, also part of the programme, played to audiences of 86,600 people- gratis—in a few months in New York. There are puppet shows (these wander about in trucks and set up their theatres in parks and playgrounds and on the main streets in small towns). The most amazing feature of the puppet shows is that, quite suddenly, a wooden. doll. called " Little Black Sambo " turns out to be a mouth- piece for economic and social doctrines. There are puppet shows dealing with housing, crime prevention, evictions. The children who watch these plays are given a little something to think about.

By law, 90 per cent., of the money allotted by the Government to the Federal Theatre must go into labour costs. Only 10 per cent. is allowed for the productions of the plays, costumes, sets, fees for playwrights. It is a programme of work relief, first and foremost. This stringency in production costs has resulted in a grand display of imagination. There can be few sets, so they must be good. Costumes have to be cheap, but they must be effective.

The Federal Theatre is part of the Works Progress Administration. The work programme, which has en- tirely superseded the dole, is divided into branches according to the skill of the unemployed. The Federal Theatre is part of the Professional, Technical and Service Unit of the W.P.A. This branch includes writers, painters, musicians, actors, as well as lawyers, doctors and clerical workers generally. For each category of worker there is a project and salary varies according to skill. There are more murals in America now than anyone dreamed existed before ; there is a vast geo- graphic, historic, economic guide book of America in process, employing thousands of jobless writers and journalists ; there are orchestras everywhere you turn.

One gets the impression that the people who work on these projects—actors, writers, musicians, painters— are happy people : they are not beggars, they are not paupers. They are normal workers again, though their work is unusually exciting because they have a lovely big field to romp in. And watching them is a Government perhaps a little surprised at the antics of its proteges but none the less proud ; for the productions of the Federal Theatre are not orthodox—they deal with the classics and social problems in ways disconcerting to professors and politicians. Let me describe two very different and yet typical performances which I saw recently in New York.

One was _Macbeth—produced and played by negroes. It was a hot night and we stood in line outside the theatre, trying to get tickets. Presently we got to the ticket- seller and he told us he could give us two seats together in a second-tier box : otherwise there were only single seats scattered about the house. He smiled all over, a. fine display of gold teeth mixed with white ones, and he seemed to be personally happy about the success of this play, as if he had written it or at least cashed in somehow on the proceeds. We took box seats because the Federal Theatre is not likes the commercial theatre : normal people can affordito sit in boxes. The seats cost 65 cents.

The box was very much on the side, very crowded, and all around us the theatre extended itself in worn-out gilt, with plaster cupids lurking at every strategic point. There was nss_air at; and programmes, serving as fans, crackled from The balcony to the front row downstairs. Full house. I ixe a checker board, the audience stretched beneath us, blonde heads and black wool. An enormous black lady, next to me, told me that it was a hot night. I agreed. She sat there, vast-bosomed and wearing a splendid dress of red poppies on yellow, and talked to me in a soft voice about the negro theatre and how of course, as anybody knew, Shakespeare had always intended his plays to be acted by negroes. She herself had seen this production of Macbeth four times and hoped to see it four times more. Shakespeare was evidently a great writer. Murder was one of the things anybody could understand ; it happened so much. She herself didn't care for Lady Macbeth, who seemed a nagging kind of woman, and the. lady who took the part this evening was too pale ; she looked sick alongside the . other coloured folk in the east. . . .

There was music. Usually in the theatre some musi- cians, sitting below sea level, play a tinny piece which is drowned out by the gossip of the public. This music flared out into the auditorium, and there was absolute silence and it was listened to respectfully. It was negro music, arranged by some unemployed negro composers, played by an unemployed negro orchestra. It was good and it might have been Beethoven conducted by Toscanini from the-ovation it received.

The curtain went up. We saw at once that these negroes had taken Shakespeare to themselves and that Macbeth would remain in this audience's mind from now on, as a play about people living in a Haitian jungle, believing in voodoo, frightened and driven and opulent people, with shining chocolate skins. Above the walls of Macbeth's castle loomed strange jungle trees ; the lights were harsh and then suddenly sombre and rich, as one imagines night lights would be in a hot country. The cast moved about the stage superbly, the beautiful negro bodies, wearing costumes that belonged to them and suddenly belonged to the play. MacDuff, they told me, was a former lightweight champion of America. He wore a pair of epaulets a foot wide, made of heavy red curtain cord. These epaulets sat handsomely on his naked torso, and were complemented by a pair of satin candy-striped red and white knee britches. Macbeth himself, one of the finest looking men in the theatre, was a negro the colour of rich coffee, taller than one expects, put together perfectly. He had " been in trouble," in fact he had only just gotten out of gaol on a murder ci arge in time to take this part. He wore superb military costumes of canary yellow and emerald green and shining high boots. Women came on and off the stage in salmon pink and purple, vaguely Empire gowns and the im- pression was of a hot richness that I have almost never seen in the theatre or anywhere else. The lines were spoken without negro accent, but in those beautiful voices which negroes have, voices made for singing : and the gestures were lavish but not amateur and over- done. The audience sat and watched and listened as if this were a murder mystery by Edgar Wallace only much more exciting. The witches' scene was the high point of the evening ; it took place in the jungle and it was not three quite nordic witches muttering over a cauldron, but a group of terrible and frightening spirits, about a steaming pot, doing voodoo incantation, with the voodoo muscle dancer, ominously in attendance as high priest and. a high crazy chorus of laughter punctuated the 'words.

It was a fine show and everybody got his money's worth.

The next night, on Broadway, I went to see a modern play written by two unknown playwrights, called Class of 29. The opening night had been a fiesta ; the theatre divided into Right and Left. The Right hissed with fury at all the lines called " Communist " and the Left applauded and cheered. There were happy fights in the lobby during the intermission, and the actors; so rumour had it, shone with excitement and spoke their lines as if possessed. This play dealt with the problem of four young men, graduated from an expensive eastern college in the class of 29, trained men, who had never found a job. They lived together in a basement flat and two girls helped with their earnings. One of the boys washed dogs for a living ; one drew cartoons and com- forted himself adequately with Communism, one got a job in an architect's office, because his father bought it for him (and later he found this out and went off his head), one sold his father'S library of first . editions until none remained, lived on a girl, and finally threw himself under a subway. The stories of these four lives raced forward accompanied by acrid criticism of the capitalist system, the U.S. Government, religion, education and most of the accepted bases of American life. There was one passage which I remember. It went :

" This is a helluva funny country. They build little houses all alike, with little yards, with little trees in them ; so that there'll be little leaves falling from the little trees and then the government can give the unemployed jobs, raking them up. . . • "