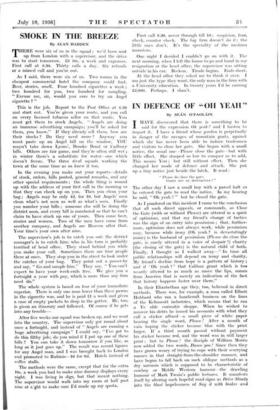 SMOKE IN THE BREEZE

As I said, there were six of us. Two rooms in the cheapest commercial hotel the company could find. Beer, stories, smell. Four hundred cigarettes a week ; two hundred for you, two hundred for sampling. " Excuse me, sir, would you care to try an Angel cigarette ? "

This is the job. Report to the Post Office at 8.30 and start out. You're given your route, and you call on every licensed tobacco seller on that route. You must get them to stock Angels. " Angels are doing an immense advertising campaign; you'll be asked for them, you know." If they already sell them, how are their stocks ? Do they need more ? Anyway you must paste up an Angel bill on the window. YOU mayn't take down Lyons', Brooke Bond or Cadbury bills. Others are fair game, and they're often still wet ; in winter there's a substitute for water—one which doesn't freeze. The three rival squads working the town at the same time as us knew it too.

In the evening you make out your reports—details of stock, orders, bills posted, general remarks, and any other special requirements ; the whole thing is wound up with the address of your first call in the morning so that they can check up on you. Then you clean your bag ; Angels may be only 4d. for 10, but Angels' men clean what's not seen as well as what's seen. Filially you number your bills ; someone else will be doing the district soon, and every bill is numbered so that he can't claim to have stuck up one of yours. Then come beer, stories and women. Two of the men have come from another company, and Angels are Heaven after that. Your time's your own after nine.

The supervisor's job is to catch you out: the district manager's is to catch him: who in his turn is probably terrified of head office. They stand behind you while yOu make your call. Sometimes there are four people there at once. They stop you in the street to look under the catches of your bag. They point out a passer-by and say, " Go and sample him." They say, " You can't expect to have your week-ends free. We give you a fortnight a year with pay, which is more than any firm need do."

The whole system is based on fear of your immediate superior. There is only one man lower than these pawns in the cigarette war, and he is paid £1 a week and given a case of empty packets to drop in the gutter. He, too, is given an itinerary and followed. Of course if he gets into any trouble— After five weeks our squad was broken up, and we went into the country. The supervisor only got round about once a fortnight, and instead of " Angels are running a huge advertising campaign" I could say, "I've got to do this filthy job; do you mind if I put up one of these bills ? You can take it down tomorrow if you like, as long as it just goes up." The result was record figures for any Angel man, and I was brought back to London and promoted to Rubinis-10 for 6d. Hotels instead of coffee stalls.

The methods were the same, except that for the extra 10s. a week you had to make nine dummy displays every night. .I was living in digs, but that meant nothing. The supervisor would walk into my room at half past nine at n4ht to make sure I'd made up my quota. First call 8.30, never through till 10 ; suspicion, fear, check, counter check. The big firm doesn't do it; the little ones don't. It's the speciality of the medium monsters.

One night I decided I couldn't go on with it. The next morning, when I left the house to go and hand in my resignation at the head office, the supervisor was sitting outside in his car. Beckon. Tirade begins. Ends short.

At the head office they asked me to think it over. I am just the type they want, the only man in the firm with a University education. In twenty years I'd be earning £2,000. Perhaps. I shan't.