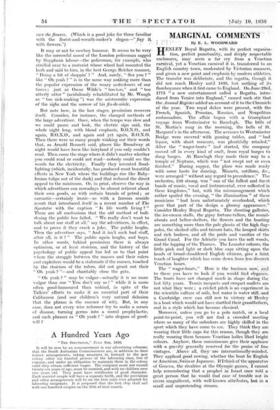 By E. L. WOODWARD , H ENLEY Royal Regatta, with its

perfect organisa- tion, perfect punctuality, and deeply respectable enclosures, may seem a‘ far cry from a • Venetian carnival, yet a., Venetian carnival it is, transferred to an English country town, moderated by Victorian Manners, and given a new point. and emphasis by modern athletics. was The transfer w deliberate, and the regatta, .though it did not reach Henley until 1839, lost nothing of . its flamboyance when it first came to England. On June.23rd, 1775 " a new entertainment called a Regatta,. intro- duced from Venice into England," caused such Stir that the Annual Register added an account of it to the Chronicle of the year. - Two royal dukes were present, with-the French; • Spanish,"Prussian, • Russian, and Neapolitan ambassadors. The affair began with a triumphant voyage from Westminster to Ranelagh. The JARS of St. Martin's rang in the morning, the bells of. St. Margaret's in the afternoon. The avenues to Westminster Bridge were covered' with gaming tables, and " bad liquor, with short measure, was plentifully retailed." After the -" wager-boats " had started, the company moved off in every kind of craft, from royal bargeS to dung barges. At Ranelagh they made their way to a temple of Neptune, which was "not swept out or even finished." During supper, the place was made ready with some haste for dancing. Minuets, cotillons, &c., were arranged " without any regard to precedence." The orchestra, 240 strong, was " one of the fullest and finest bands of music, vocal and instrumental, ever collected in these kingdoms," but, with the mismanagement which rather spoiled the evening, " the illumination " of these musicians " had been unfortunately overlooked, which gave that part' of the design a gloomy appearance." Consider Henley Royal Regatta. The shooting galleries, the ice-cream stalls, the gipsy fortune-tellers, the roinid- abouts .and helter-skelters, the flowers and the bunting are something more than the pale ghosts of the high, flag- poles, the slashed silks and tricorn hats, the hooped skirts and rich bodices, and all the pride and vanities of the Grand Canal. For the Adriatic you have the soft woods, and the lapping of the Thames: The Leander colours,-.the little pink and light or dark blue caps sitting upon the -heads of broad-shouldered English 'citizens; give a faint touch of laughter which has conic down from less 'discreet Venetian hours. - - The " wager-bOatS." Here is the busineSs now, and , to these you have to look if you would. find elegance. The boats have not changed much in shape during the last fifty years. Tennis racquets and croquet mallets are not what they were ; a -cricket pitch is an experiment in the scientific culture of soils, but water is water still, and a Cambridge crew can still row to victory. at- Henley in a boat which would not have startled their-grandfathers; and in a style which has become classical: Moreover; unless you go to a polo match,' or .a local point-to-point, you will riot find a crowded -meeting where so many of the onlookers are highly skilled in the sport which they have come to see. They think they are wearing their little caps for this reason, though they are really wearing them because Venetian ladies liked bright colours. Anyhow, these connoisseurs give their applause with .a• gravity generally reserved for the praise of fine vintages. - Above all, theritie Internationally-mirided. They applaud good rowing, whether the boat be English of 'American, Swiss or Japanese: If I think of the apparatus of Geneva, the rivalries at the Olympic gimes, I cannot help remembering that a prophet in Israel once told a great, person that he would find ease of ;trouble not in river utagnificent, with well-known attributes; but in a small and unpretending. stream,