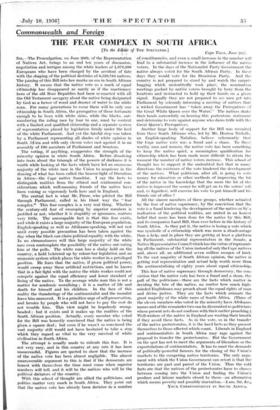 Page 15, 10 July 1936 — THE FEAR COMPLEX IN SOUTH AFRICA Commonwealth and Foreign [To
Close

THE FEAR COMPLEX IN SOUTH AFRICA Commonwealth and Foreign [To

SIR,—The Promulgation, on June 20th, of the Representation of Natives Act, brings to an end ten years of discussion, negotiation and intrigue among the white leaders of 1,979,390 Europeans who have been charged by the accident of fate with the shaping of the political destinies of 6,529,784 natives. The passing of this Bill into law marks an era in South African history. ft means that the native vote as a mark of equal citizenship has disappeared as surely as if the reactionary laws of the old Boer Republics had been re-enacted with all the Old Testament savagery about the native being designated by God as .a hewer of wood and drawer of water to the white .,man.: For, many, generations to come there will be only one citizenship in South Africa, the prerogative of those fortunate enough to be born with white skins, while the blacks, out- numbering the ruling race by four to one, must be content with a limited and qualified citizenship and a separate system of representation placed by legislation firMly under the heel of the white Parliament. And yet the fateful step was taken by a Parliament representing all shades of white opinion in South Africa and with only eleven votes cast against it in an assembly of -190 members of Parliament and Senators.

The voting, if anything, exaggerates the strength of the minority opinion in white South Africa. Before dissolving into tears about the triumph of the powers of darkness it is worth while looking at the facts whieh have led an enormous majority of the white race in the Union to acquiesce in the dousing of what has been called the beacon-light of liberalism in Africa—the Cape native franchise. I say the facts to distinguish realities from the ethical and sentimental con- siderations which well-meaning friends of the native have been-voicing so vigorously both here and in England.

The central fact is what Mr. Pirow, who piloted the Bill through Parliament, called in his blunt way the " fear complex." This fear complex is a very real thing. Whether the century-old fear of swamping by superior numbers is justified or not, whether it is stupidity or ignorance, matters very little. The unescapable fact is that this fear exists, and while it exists a large majority of the European population, English" speaking as well as Afrikaans-speaking, will not rest until every possible precaution has been taken against the day when the black can claim political equality with the white. In no circwnstances will this large majority of the white race even contemplate the possibility of the native out-voting him at the polls. The white man has a shaky hold on the country, a hold bolstered up by colour-bar legislation and an economic system which places the white worker in a privileged position. He fears that the native, if given political power, would sweep away these artificial restrictions, and he knows that in a fair fight with the native the white worker could not compete against the equal efficiency and lower standard of living of the native. To the average white man this is not a matter for academic moralising ; it is a matter of life and death for himself and his children. In the face of this reality the thunderings of the sentimentalist and the moralist leave him unmoved. It is a primitive urge of self-preservation, and heroics by people who will not have to pay the cost do not trouble him. This view might be hopelessly wrong- headed ; but it exists and it makes up the realities of the South African position. Actually, every member who voted for the Bill was honestly convinced that the native is being given a square deal ; but even if he wasn't so convinced the vast majority still would not have hesitated to take a step which they regard as vital to the very survival of white civilisation in South Africa.

The . attempt is usually made to ridicule this fear. It is not very easy, and in this country at any rate it has been unsuccessful. Figures are quoted to show that the increase of the native vote has been almost negligible. The almost unanswerable argument to this is that if the democrats are honest with themselves the time must come when superior numbers will tell, and it will be the natives who will be the political dictators of the country. With this school of thought are allied the politicians, and politics matter Very much in South Africa. They point out that the native vote has already been decisive in number of constituencies, and even a small increase in the number will lead to' a substantial increase in the influence of the native voters. In the days of the Nationalist Party Government the native always voted for the South African Party. In these days they would vote for the Dominion Party. And the country is not prepared to stand by and watch the carpet- bagging which undoubtedly took place, the nomination meetings packed by native voters brought by lorry from the locations -and instructed to hold up their hands on a given signal. Equally they are not prepared to see men get into Parliament by solemnly informing a meeting of natives that a wicked Government has taken away the Prerogatives of the Great White Queen over the Water." The natives shake their heads sorrowfully on hearing this portentous statement and determine to vote against anyone who dares trifle with the .Great Queen's Prerogatives.

Another large body of support for the Bill was recruited from those South Africans who, led by Mr. Heaton Nicholls, an English-speaking Natalian, believe vehemently that the Cape native vote was a fraud and a sham. To these worthy men and women, the native vote has been something to keep the native quiet, a meaningless qualification for citizenship which has been made more difficult to attain the moment the number of native voters increase. This school of thought has to support it the undoubted fact that in many directions the existence of the vote hindered the development of the natives. What politician, after all, is going to vote money for education or other methods of improving the lot of the native in the knowledge that the more the lot of the native is improved the sooner he will get on to the voters' roll and, ex hypothesi, will exercise his vote to put himself and hit friends out of office ?

All the sincere members of these groups, whether actuated by the fear of native supremacy, 'by'the conviction that the vote is a fraud hindering the development of the native or bfa realisation of the political realities, are united in an honest belief that more has been done for the native by this Bill, and its companion Land Bill, than ever before in the history of South Africa. As they put it, the native is losing a vote which was symbolic of a citizenship which was more a disadvantage than a help, and in place they are getting at least a platform in Parliament, substantial representation in the Senate, a Native Representative Council which has the virtue of represent- ing all the natives of the Union instead of only the Cape natives and, above all, an additional seven million morgen of land. To the vast majority of South African opinion, the native is getting real representation and actual help worth more than the sentimentalising of eighty years about equal citizenship.

This fear of native supremacy through democracy, the con- viction that the native vote has been a fraud and a sham, the pull of the politicians—these are the facts which matter in deciding the fate of the native, no matter how much high- minded Englishmen may preach about the equal rights of man and divine justice. They are the facts which animate the great majority of the white races of South Africa. (Three of the eleven members who voted in the minority have Afrikaans names and of the remainder two can be discounted as politicians whose present acts do not conform with their earlier preaching.) Well-wishers of the native in England are wasting their breath if they avoid these facts. As in the vote, so in the transfer of the native protectorates, it is the hard facts as they present themselves to those affected which count. Liberals in England and sentimentalists in South Africa may rage against the proposal to transfer the protectorateS; But the Government on the spot has not to meet the arguments of liberalism or the expostulations of sentimentalists. It has to meet the demands of politically-powerful farmers for the closing of the Union's markets to the competing native territories. The only argu- ment with which the Union Government can retort is that the territories are part and parcel of the Union. Thus the cold facts are that the natives of the protectorates have to choose between coming into the Union and finding the Union's produce and labour markets closed to them—an alternative which means poverty and possibly starvation.—I am, Sir, &c., Yotra -CORRESPONDENT IN SOUTH AFRICA.