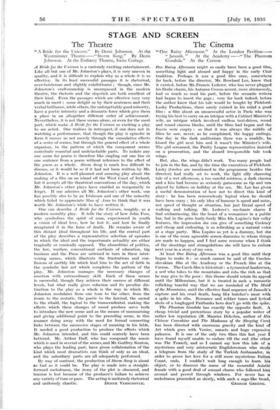 At the Curzon One Rainy Afternoon might so easily have been a good film, something light and absurd and happy in the early Clair tradition. Perhaps it was a good film once, somewhere far back, before the director, Mr. Rowland Lee, knew that it existed, before Mr. Francis Lederer. who has never plugged his Dodie charm, his Autumn Crocus accent, more strenuously, had so much as read his part, before the scenario writers had begun to insert the gags ; very far back indeed, before the author knew that his tale would be bought by Pickford- Lasky Productions, there surely existed in his mind a good film : a film about an unsuccessful actor in Paris who was trying his best to carry on an intrigue with a Cabinet Minister's wife, an intrigue which involved endless taxi-drives, round and round cinema blocks, until the films had begun and the foyers were empty : so that it was always the middle of films he saw, never, as he complained, the happy endings. One day in the dark auditorium there was a muddle, he kissed the girl next him and it wasn't the Minister's wife. The girl screamed, the Purity League representative insisted on a prosecution, and the absurd irresponsible tale took wings.

But, alas, the wings didn't work. Too many people had to join in the fun, and by the time the executives of Pickford- Lasky (twelve are mentioned in the programme besides the director) had really set to work, the light silly charming tale of a wet afternoon, a too careful mistress, a dark cinema and a kiss had become as seriously gamesome as tip and run played by fathers on holiday at the sea. Mr. Lee has given a useful demonstration of how not to direct this kind of story : he has been remorselessly logical when he should have been crazy ; his only idea of humour is speed and noise, not speed of thought or situation, but just literal speed of walking and talking. Mr. Lederer's mechanic charm I find embarrassing, like the boast of a womaniser in a public bar, but in the grim hurly-burly Miss Ida Lupino's fair sulky features, the impression she can give of something Cockney and cheap and endearing, is as refreshing as a natural voice at a stage party. Miss Lupino as yet is a dummy, but she is one of the more agreeable screen dummies to whom things are made to happen, and I feel some remorse when I think of the shootings and strangulations she will have to endure next year in a story of my own.

At least One Rainy Afternoon was a good film until they began to make it : so much cannot be said of the Czecho- slovakian film at the Academy or the French film at the Curzon. The Czech film is historical : a tyrannical landowner, a serf who takes to the mountains and robs the rich so that he may give to the poor : this theme should retain its appeal until the Millennium, but it is treated in such a romantic rollicking tuneful way that we are reminded of The Maid of the Mountains, until the effective final sequence of Janosik's capture and his cruel death, hung like butcher's meat with a spike in his ribs. Romance and robber tunes and lyrical shots of a longlegged Fairbanks hero don't go with the spike.

The Phantom Gondola has exactly the opposite fault. A cheap trivial and pretentious story by a popular writer of rather low reputation (M. Maurice Dekobra, author of His Chinese Concubine and The Madonna of the Sleeping Cars) has been directed with enormous gravity and the kind of Art which goes with Venice, sunsets and huge expensive palazzos. It is one of the only two films this last year if have found myself unable to endure till the end (the other was The Tunnel), and so` I cannot say how this tale of as mysterious and very aristocratic Englishwoman who steals a telegram from the study of the Turkish Ambassador, in order to prove her love for a still more mysterious Italian Count, ends. I couldn't wait long enough to learn his object, or to discover the name of the mournful Asiatic female with a good deal of sensual charm who followed hini around and peered through windows. For never has a melodrama proceeded so slowly, with such a saga-like tread.