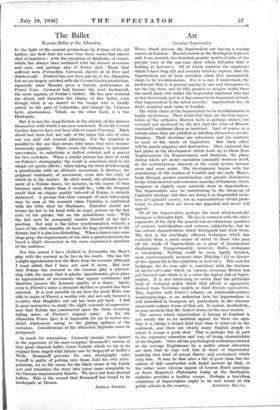 Russian Ballet at the Alhambra

IN the light of the current productions by Fokine of his old ballets, one feels that for some time these works had almost died of inanition : with the exception of Sylphides, of course, which has always been sustained with the utmost reverence and care, and perhaps also of Prince Igor. Those that suffered were Petrouchka, Carnaval, Spectre de in Rose and Schellerexade. Firebird has not been put on at the Alhambra but we are largely satisfied with the Covent Garden production, especially. since Massine gives a historic performance as Prince Ivan. Carnaval had become the most hackneyed, the most injured, of Fokine's ballets. He has now restored the detail, and therefore the charm, of this ballet, even though there is no dancer in the troupe who is ideally suited to the part of Columbine, and though the Chiarina lacks graciousness. Vilzak, on the other hand, is a fine Harlequin.

But it is not the imperfection or the artistry of the dancers themselves with which I am now concerned. Even the Covent Garden dancers have not been able to repair Carnaval. Much detail had been lost, not only of the mime but also of what one can only call musical phrasing. For the situation is parallel to the one that occurs with tunes that have become immensely popular. There exists the tendency to introduce unevenness, to substitute a dotted crotchet and a quaver for two crotchets. When a similar process has been at work on Fokine's choregraphy, the result is sometimes fatal to his simple yet poetic effects ; when taking the form of telescoping a penultimate with an ultimate movement, it destroys the poignant continuity of movement, even into the void, of which he is the master. In other words, the ultimate move- ment of a Fokine dance, for instance, in the course of time becomes more drastic than it should be ; with the frequent result that an elegiac quality beloved of Fokine is entirely destroyed. A prosaic but clear example of such telescoping may be seen at the moment when Pantalon is confronted with his billet dot= by Harlequin. Pantalon should not return his hat to his head with an angry gesture on the last note of the phrase, but on the penultimate note. With the last note he pompously assures himself of his hat's position. Not only is the latter synchronisation without a trace of the slick banality we have for long attributed to the former, but it is also less disturbing. When a dancer uses some stage prop, the requirements of too slick a synchronisation can breed a slight discomfort in the more experienced members of the audience.

For this reason I have disliked in Petrouchka the Moor's play with.the coconut as he lies on his couch. One has felt a slight apprehension lest the Moor drop the coconut, although I must admit that I have not seen it occur. But now that Fokine has restored to the coconut play a relation- ship with the music that is plastic, apprehension gives place to appreciation of movements that appear continuous and therefore possess the dynamic quality of a dance. Again, even to Pierrot's mime a dynamic rhythm or growth has been restored. It is now possible to see how the great Bolm was able to make of Pierrot a worthy role, and not only because a re-entry that Diaghilev cut out has been put back. I find it most instructive to study the slight crescendo of expressive- ness that Fokine has constructed upon the three recurring falling notes of Pierrot's original entry. As for the Alhambra Prince Igor, it is impossible for me to notice any detail whatsoever owing to the glaring ugliness of the costumes. Consideration of the Alhambra Sylphides must be postponed.

So much for restoration. Curiously enough, there figures in the repertoire of the same company Romanoff's version of that great classical ballet, Casse-Noisette, which we see in its original form staged with infinite care by Serguyeff at Sadler's Wells. Romanoff provides his own choregraphy (also Svereff is guilty of putting into Swan Lake his own inter- polations, set to the music for the black swans of the fourth act) and translates the story into terms more acceptable to the German impressionist theatre. We have but four classical ballets. This is the second that Roinanoff has found to be inadequate as Drama.