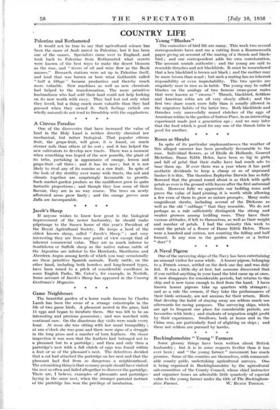 It would not be true to say that agricultural science has been the cause of Arab unrest in Palestine, but it has been one of the causes. Specialists came over to England, and took back to Palestine from Rothamsted what secrets were known of the best ways to make the desert blossom as the rose, and " rivers of oil and wine flow as the Book assures." Research stations were set up in Palestine itself, and land that was barren or bore what Goldsmith called " half a tillage " became productive and thereby much more valuable. New machines as well as new chemicals had helped to the transformation. The more primitive husbandmen who had sold their land could not help looking on its new worth with envy. They had lost not only what they loved, but a thing much more valuable than they had guessed when they owned it. Such feelings (which are wholly natural) do not tend to friendship with the supplanters.

One of the discoveries that have increased the value of land in the Holy Land is neither directly chemical nor mechanical, but rather biological. That popular citrous fruit, the grape-fruit, will grow, it is found, on much sterner soils than others of its sort ; and it has helped the new cultivators to develop new tracts. There was a moment when something was hoped of the new pomella, the giant of its tribe, partaking in appearance of orange, lemon and grape-fruit--all three ; and it has its uses ; but it is not• likely to rival any of its cousins as a raw fruit. In spite of the look of dry sterility over many wide tracts, the soil and climate together are surprisingly favourable to growth. Such market-garden produce as the cauliflower grow to quite fantastic proportions ; and though they lose some of their flavour, they are in no way coarse. The trees on newly afforested areas grow finely ; and the orange groves near Jaffa are incomparable.

Jacob's Sheep If anyone wishes to know how great is the biological improvement of the newer husbandry, he should make pilgrimage to the Sussex home of this year's President of the Royal Agricultural Society. He keeps a herd of the oldest known sheep, called " Jacob's Sheep " ; and very interesting they are from any point of view except that of inherent commercial value. They are as much inferior to Southdown or Suffolk sheep as the native rufous cattle of the Argentine are inferior to the Herefords, Shorthorns and Aberdeen Angus among herds of which you may occasionally see these primitive Spanish animals. Early cattle, on the other hand, including both hornless and long-horned types, have been raised to a pitch of considerable excellence in some English Parks, Mr. Cator's, for example, in Norfolk. Some account of Jacob's Sheep has appeared in the Country Gentleman's Magazine.

* * * * Game Neighbours • The beautiful garden of a home made famous by Charles Lamb has been the scene of a strange catastrophe in the life of two game birds. A pheasant nested in the grass, laid 11 eggs and began to incubate them. • She was felt to be an • interesting and precious possession ; and was watched with continual care. On the disastrous day visits were made every hour. At noon she was sitting with her usual tranquillity ; at one o'clock she was gone and there were signs of a struggle in the long grass and a number of torn feathers. On closer inspection it was seen that the feathers had belonged not to a pheasant but to a partridge ; and then and only then a • partridge's nest with a full clutch of eggs was found within - a foot or so of the pheasant's nest. The detectives decided that a cat had attacked the partridge on her nest•and that the• pheasant had fled from so dangerous - a neighbourhood: The astonishing thing is that so many people should have visited• the nest so often and failed altogether to discover the partridge; • There are, I believe, examples of pheasants and partridges ' laying in the same nest, when the stronger parental instinct of the partridge has won the privilege of incubation. " • Young "Blushes"

The curiosities of bird life are many.. This week two several correspondents have sent me a cutting from a Bournemouth paper giving an account of the mating of a thrush and black- bird ; and one correspondent adds his own corroboration. The -account sounds authentic ; and the young are said to resemble thrushes and not blackbirds. It must be remembered that a hen blackbird is brown not black ; and the mother may be more brown than usual ; but such a mating has no-inherent impossibility or even improbability. The two species are singularly near in race as in habit. The young may be called blushes on the analogy of two famous swan-goose males that were known as " swoose." Thrush, blackbird, fieldfare and American robin are all very closely allied ; and the first two share much more fully than is usually allowed in the migratory habits of the latter two. Both blackbirds and thrushes very successfully reared clutches of the eggs of American robins in the garden of Sutton Place, in an interesting experiment made just a generation ago ; and we may infer that the food which is good for any one of the thrush tribe is good for another.

In spite of its particular unpleasantnesses the weather of this alleged summer has been peculiarly favourable to the rose. Individual flowers, as of Etoile de Hollande, General McArthur, Dame Edith Helen, have been so big in girth and full of petal that their stalks have had much ado to bear them up. If ever there was a year where it has paid aesthetic dividends to keep a clump or so of unpruned bushes it is this. The thornless Zephyrine Darwin has so fully flowered that the ground round about is as thick with spilt petals as ever is the ground with leaves after the first autumnal frost. However fully we appreciate our bedding roses and prove the value of hard pruning, it is worth while allowing a few even of them to grow as nature prompts. Many make magnificent shrubs, including several of the Dicksons as well as the old " cabbage " that they resemble. We do not perhaps as a rule sufficiently distinguish the strong and weaker growers among bedding roses. They have their various attitudes, if left to themselves, as well as their weight and number of petals. I had the curiosity this week to count the petals of a flower of Dame Edith Helen. There were a hundred and sixteen, not counting the falling and half formed. Is any rose in the garden sweeter or a better " doer" ?

A Naval Pigeon One of the surveying ships of the Navy has been entertaining an unusual visitor for some while. A homer pigeon, belonging to a French owner, settled on the deck one day and was duly fed. It was a little shy at first, but someone discovered that • if you rattled anything in your hand the bird came up at once. It now disappears for considerable periods, but returns to the ship and is now tame enough to feed from the hand. I have known homer pigeons take up quarters with strangers ; and as a rule the owners, if they take the performances of.' their birds seriously, are not anxious for their return. Birds that develop the habit of staying away are seldom much use afterwards for racing purposes. The surveying ships, which- are apt to frequent one place for considerable periods, are favourites with birds ; and students of migration might profit by their experiences. Swallows, both at home and in the China seas, are particularly fond of alighting on ships ; and , these not seldom are pursued by hawks.

Buckinghamshire " Young " Farmers Some gloomy things have been written about British husbandry ; but it is in some respects livelier than it has ever been ; and " the young farmer " movement has much promise. Some of the counties are themselves, with commend- able county pride, undertaking agricultural surveys. One is being organised in Buckinghamshire by the agricultural sub-committee of the County Council, whose chief instructor. and organiser issues an admirable little quarterly of especial value• to the young farmer 'under the title of IV Buckingham-