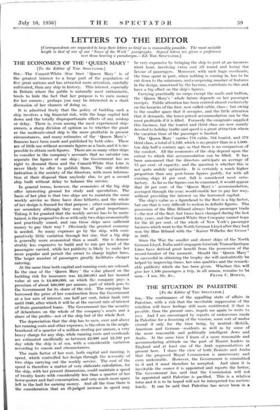 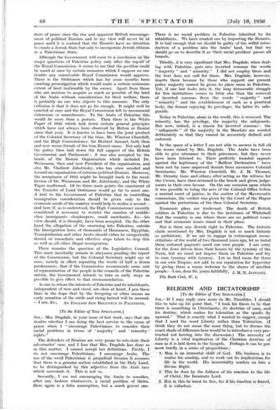 THE SITUATION IN PALESTINE

[To the Editor of THE SPECTATOR.] SIR,—The continuance of the appalling state of affairs in Palestine, with a risk that the inevitable suppression of the rebellion will leave feelings still more embittered, if that is possible, than the present ones, impels me again to write to you. And I am encouraged by reports of endeavours made in Palestine for a lessening of the tension, some sort of modus vivendi if only for the time being, by neutral—British, American and German—residents as well as by some of the more reasonable and politically intelligent Jews and Arabs. At the same time I learn of a more reasonable and accommodating attitude on the part of Zionist leaders in England and at least one of the Arab representatives at present here. I share the view of both Zionists and Arabs that the proposed Royal Commission is unnecessary and even undesirable. However, the Government is committed to it and it must therefore be accepted. And since it is inevitable the sooner it is appointed and reports the better. The Government has said that the Commission will not be appointed until Palestine is pacified. This is a relative term and it is to be hoped will not be interpreted too meticu- lously. It can be said that Palestine has never been in a state of peace since the rise and apparent Biltisli-enecisirage- meat of political Zionism and in my view will never 'be-at peace until it is realised that the Zionists have no intention to create a Jewish State but only to incorporate Jewiih eititens in a Palestinian State.

Although the Government will come to a conclusion on the major questions of Palestine policy only after the report' of the 'Royal Commission, it seems to me that the position Could be eased at once by certain measures which I suppose no one doubts any conceivable Royal Commission would approve. There is the Ordinance which has for some months been awaiting promulgation which would make a certain minimum extent, of land inalienable by the owner. Apart from those who are anxious to acquire as much as possible of the land a the Arabs without consideration for their welfare; there is probably no one who objects to this measure: The only criticism is that it does not go far enough. It might well be enacted at once and the Royal Commission left to recommend extensions or amendments. To the Arabs of Palestine this Worild be more than a geiture. Then there is the White Paper of 1922 which laid down certain general principles which have not always been observed by Briton or Zionist since that year. It is known to have been the joint product of the Colonial Secretary of the time, Mr. Winston Churchill, and the High Commissioner, Sir Herbert Samuel, both then and now warm friends of the true Zionist cause. Not only had the policy then laid down the fUll support of the British Government and Parliament : it was also accepted by the heads of the Zionist Organisation which included Dr. Weizmann, then and now President of the organisation, and also Mr. Vladimir Jabotinsky, who has since seceded and formed an organisation of extreme political Zionists. However, the acceptance of 1922 might be brought back to the recol- lection of Dr. Weizmann and Mi. Jabotinsky, and the White Paper reaffirmed. Of its three main points the enactment of the Transfer of Land Ordinance would go far to meet one. A hint to the Government of Palestine that in controlling immigration consideration should be given only to the economic needs of the country would help to realise a second- - and- here if, as is understood, the High Commissioner recently considered it necessary to restrict the number of middle- class immigrants—shopkeepers, small merchants, &c.—his view should, it is thought, have-been accepted. On the other hand the allegation of the swarming into Palestine, outside the Immigration laws, of thousands of Hauranese, Egyptian, Transjordanian- and other Arabs should either be categorically denied or- immediate and• effective steps taken to stop this as well as all other illegal immigration.

There remains the question of the. Legislative Council. This must inevitably remain in abeyance pending the report of the Commission, but the Colonial Secretary might say at once, merely in effect repeating the words of half a dozen predecessors, that if the Commission recommends some sort of representation of the people in the councils of the Palestine nation, the Government intends to take as early steps as possible to give effect to that recommendation.

As one to whom the interests of Palestine and its inhabitants, independent of race and creed, are close at heart, I pen these lines in the hope that by the foregoing or other means an early cessation of the strife and rising hatred will be secured. —I am, &c., AN ENGLISH JEW RECENTLY IN PALESTINE.