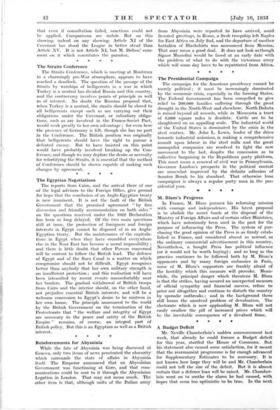 Page 2, 10 July 1936 — The Presidential Campaign The campaign for the American presidency cannot
Close

The Presidential Campaign The campaign for the American presidency cannot

be merely political ; it must be increasingly dominated by the economic crisis, especially in the farming States. The Federal Government has been compelled to give relief to 200,000 families suffering through the great drought in the North-West and elsewhere. North Dakota is ruined beyond all records, while in Minnesota a tract of 6,000 square miles is desolate. Cattle are to be slaughtered on an appalling scale. The industrial world of the United States is dominated by the crisis in the steel centres. Mr. John L. Lewis, leader of the drive towards industrial unionism, is making a comprehensive assault upon labour in the steel mills and the great monopolist companies are resolved to fight the new movement to the last, despite the concession as to collective bargaining in the Republican party platform. This must mean a renewal of civil war in Pennsylvania. Governor Landon's prospects in the political contest are somewhat improved by the definite adhesion of Senator Borah to his standard. That otherwise lone campaigner is always a regular party man in the pre- sidential year.