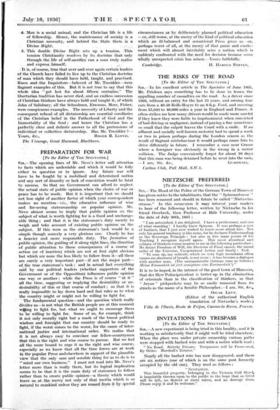 THE RISKS OF THE ROAD

[To the Editor of THE SPECTATOR.] SIR,—In his excellent article in The Spectator of June 19th, Mr. Prioleau says something has to be done to lessen the appalling number of casualties on the road. As a driver since 1903, without an entry for the last 25 years, and owning four cars from a 40-50 Rolls-Royce to an 8-h.p. Ford, and covering from 85,000 to 40,000 miles a year in England and France, it often strikes me how many, drivers would be made more careful if they knew they were liable to imprisonment when convicted of bad driving or negligence, instead of paying a fine sometimes so small that the culprit leaves the Court with a smile. If an affluent and socially well-known motorist had to spend a week or two in prison perhaps during the London season as the result of flagrant misbehaviour it would Perhaps cause him to drive differently in future. I remember a case near Grasse where a foreigner was obviously in the wrong in a motor collision. The Judge conveniently forgot for about 10 days that this man was being detained before he went into the case.