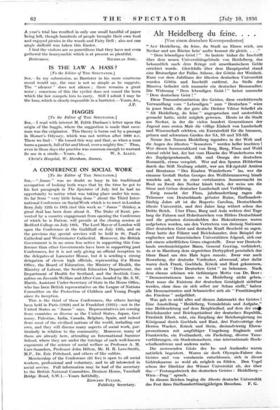 traditional occupation of looking both ways that by the _time he got to his last paragraph in The Spectator of July 3rd he had no opportunity to notice what was taking place under his nose. So far from" very little being done " about the Third Inter- national Conference on Socia' Work which is to meet in London fromJuly 12th to 18th (net this week as " Janus " thinks), .a great deal has been done about it. The Duke of Kent, pre- vented by a country engagement from opening the Conference of which he is Patron, will preside at the Closing session at Bedford College on July 18th. The Lord Mayor of London will open the Conference at the Guildhall on July 13th, and on the previous day special services will be held in St. Paul's Cathedral and Westminster Cathedral. Moreover, the British Government is in no sense less active in supporting this Con- ference than other Governments have been in supporting past Conferences, for it is not only giving an official reception to the delegates at Lancaster House, but it is sending a strong delegation of eleven high officials, representing if e Home Office, the Board of Education, the Ministry of Health, the Ministry of Labour, the Scottish Education Department, the Department of Health for Scotland, and the Scottish Com- mittee on Juvenile Welfare and After-Care, headed by Mr. S. W. Harris, Assistant Under-Secretary of State in the Home Office, who has been British representative on the League of Nations Committee on the Protection of Children and Young People since its inception.

This is the third of these Conferences, the others having been held in Paris (1928) and in Frankfurt (1931)—not in the United States as " Janus " says. Representatives are coming from countries so diverse as the United States, Japan, Ger- many, Palestine, India, Canada, Belgium, Spain, and indeed from most of the civilised nations of the world,' including our own, and they will discuss many aspects of social work, par- ticularly in relation to the community. Moreover, many of them are already here, attending an International Summer School, where they are under the tutelage of such well-known exponents of the science of social welfare as' Professor A. M. Carr-Saunders, Professor John Hilton, Mr. H. B. Lees-Smith, M.P., Dr. Eric Pritchard, and others of like calibre.

Membership of the Conference (£1 fee) is open to all social workers, professional and voluntary, and to all interested in social service. Full information may be had of the secretary to the British National Committee, Denison House, Vauxhall Bridge Road, S.W.1.—Yours faithfully, EDWARD FULLER, Publicity Secretary.