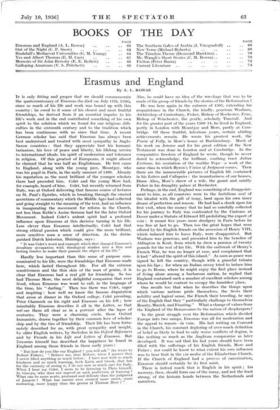 Erasmus and England BOOKS OF THE DAY

By A. L. ROWSE IT is only fitting and proper that we should commemorate the quatercentenary of Erasmus (he died on July 11th, 1536),

since so much of his life and work was bound up with this country : he owed to it some of his closest and most fruitful friendships, he derived from it an essential impulse to his life's work and in the end contributed something of his own spirit to the solution which we found for our religious diffi- culties in the sixteenth century and to the tradition which has been continuous with us since that time. A recent German scholar has said that Erasmus has always been best understood and treated with most sympathy in Anglo- Saxon countries : that they appreciate best his humani- tarianism, his love of peace and liberty, his lifelong service to international ideals, his spirit of moderation and tolerance in religion. Of this greatest of Europeans, it might almost be claimed that he was half an Englishman. He first came to England, along with the young peer, Mountjoy, who was his pupil in Paris, in the early summer of 1499. Already his reputation as the most brilliant of the younger scholars there had preceded him. Colet and the young More had, for example, heard of him. Colet, but recently returned from Italy, was at Oxford delivering that famous course of lectures on St. Paul's Epistles, which in breaking through the crusted accretions of commentary which the Middle Ages had collected and going straight to the meaning of the text, had an influence in inaugurating the movement for reform in the Church, not less than Keble's Assize Sermon had for the later Oxford Movement. Indeed Colet's ardent spirit had a profound influence upon Erasmus at this decisive turning in his life. Less clever than Erasmus intellectually, Colet had that strong ethical passion which could give the more brilliant, more sensitive man a sense of direction. As the distin- guished Dutch historian, Huizinga, says :

" It was Colet's word and example which first changed Erasmus's desultory occupation with theological studies into a firm and lasting resolve to make their pursuit the object of his life."

Hardly less important than this sense of purpose com- municated to his life, were the friendships that Erasmus made here, which lasted throughout life. For all the extreme sensitiveness and the thin skin of the man of genius, it is clear that Erasmus had a real gift for friendship. So too

had Thomas More, the most delightful companion that ever lived, whom Erasmus was wont to call, in the language of the time, his " darling." Then too there was Colet, eager

and inspiring : how well we know the famous disputation

that arose at dinner in the Oxford college, Colet presiding, Prior Charnock on his right and Erasmus on his left ; how inimitably Erasmus describes it all in the Letters, so that weik see them all clear as in a portrait after the lapse of centuries. They were a charming circle, those Oxford humanists, drawn together by their common love of scholar- ship and by the ties of friendship. Their life has been fortu- nately described for us, with great sympathy and insight, by older English writers, by Seebohm in his Oxford Reformers and by Froude in his Life and Letters of Erasmus. But Erasmus himself has described the happiness lie found in England among those friends in those early years : " But how do you like our England ? you will ask " (he wrote to Robert -Fisher). "Believe' me, dear Robert, when I answer 'that 1 never liked anything so much before. I have met with so much kindness and so much learning, both Latin and Greek, that but for the curiosity of seeing it, I do not now so much care for Italy., Wheri I hear my Colet, I seem to be listening to Plato himself. In Grocyn;- who does not marvel at such perfection of learning ? What can be more acute, profound and delicate than the judgment of 4,inacre ? What has nature ever created more sweet,. more endearing, more happy than the genius of Thomas More ?

Alas, he could have no idea of the wreckage that was to be made of the group of friends by the storms of the Reformation I

He was here again in the autumn of 1505, extending his acquaintance in the Church, the kindly, generous Warham, Archbishop of Canterbury, Fisher, Bishop of Rochester, Foxe, Bishop of Winchester, the gentle, scholarly Tunstall. And for the greater part of the years 1509-14, he lived in England, partly in London with Mountjoy and More, partly at Cam- bridge. Of these fruitful, laborious years, certain abiding achievements remain. He wrote his greatest work, the Praise of Folly, in More's house at Bucklersbury. Much of his work on Jerome and for his great edition of the New Testament was done in London and at Cambridge. In the comparative freedom of England he wrote, though he never dared to acknowledge, the brilliant, scathing tract Julius Exclusus, his scoriation of the warlike Pope—a work of the same class in which Byron's Vision of Judgment comes. Then there are the innumerable pictures of English life contained in his Letters and Colloquies : the insanitariness of our houses, Dame Alice, More's shrew of a wife, the gaunt and saintly Fisher in his draughty palace at Rochester.

Perhaps, in the end, England was somethhig of a disappoint- ment to him, as all countries were to the fastidious soul of the idealist with the gift of irony, bent upon his own inner dream of perfection and reason. He had had a shock upon his first visit, when the money that he had so carefully collected for his journey to Italy was confiscated by the Customs at Dover under a Statute of Edward III prohibiting the export of coin : it meant five years more drudgery in Paris before he was free at last to go. Then too the great hopes that were offered by his English friends on the accession of Henry VIII, which induced him to leave Italy, were disappointed. But Warham was generous, and presented him to the benefice of Aldington in Kent, from which he drew a pension of twenty pounds for the rest of his life. With the outbreak of Henry's French War, he was no longer at ease, and complained that it had " altered the spirit of this island." As soon as peace was signed he left the country, though with a graceful tribute upon his lips ; for when an Italian envoy tried to induce him to go to Rome, where he might enjoy the first place instead of living alone among a barbarous nation, he replied that England contained such a number of excellent scholars among whom he would be content to occupy the humblest place.

One recalls too that when he describes the things upon which various nations pride themselves, the Scots their nobility and logical sense, the French their breeding, he says of the English that they " particularly challenge to themselves Beauty, Musick, and Feasting." What a change of values from the England of the Renaissance to the nation of shopkeepers !

In the great struggle over the Reformation which divided Europe into two camps, Erasmus was all for moderation and the appeal to reason—in vain. His last writing on Concord in the Church, his constant deploring of over-much definition of belief as likely to lead to only worse conflicts of dogma, is like nothing so much as the Anglican compromise as later developed. It was sad that his last years should have been filled with the sufferings of his English friends, More and Fisher ; nor could he know to what extent his own influence was to bear fruit in the pia media of the Elizabethan Church. If the Church of England had a process of canonisation, Erasmus should certainly be its first saint.

There is indeed much that is English in his spirit ; his memory, then, should form one of the many, and not the least strong, of the historic bonds between the Netherlands and ourselves.