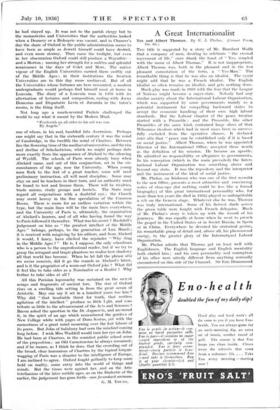 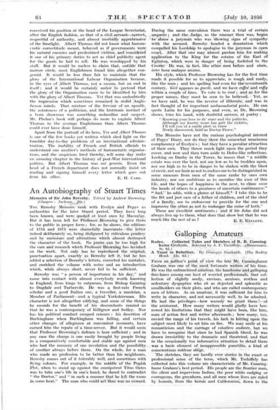 THE title is suggested by a story of Mr. Humbert Wolfe that a company of men, desiring to celebrate " the eternal

movement of life," once drank the toast of " Yes, coupled with the name of Albert Thomas." It is not inappropriate. Albert Thomas was, both in the pleasant and in the less

Much play was made in 1919 with the fear that the League of Nations might become a super-state. Nobody had any similar anxiety about the International Labour Organisation, which was supported by some governments mainly as a potential instrument for compelling backward states to accept the economic handicap of their own high labour standards. But the Labour chapter of the peace treatise started with a Preamble ; and the Preamble, like other Preambles of the same kind, contained large slices of that Wilsonian idealism which had in most cases been so success- fully excluded from the operative clauses. It declared inter alia that " peace can be established only if it is based on social justice." Albert Thomas, when he was appointed Director of the International Office, accepted these words as the definition of his mission. He became an apostle. He admitted no responsibility or allegiance to governments. In his conception (which in the main prevailed) the Inter- national Labour Organisation was something above and beyond any state. It was the repository and the interpreter and the instrument of the ideal of social justice.

Mr. Phelan, an Irishman who was one of the first recruits to the new Office, presents a most attractive and convincing series of close-ups (for nothing could be less like a formal biography) of this great international personality who, for more than ten years (he died in 1932) played so unforgettable a role on the Geneva stage. Whatever else he was, Thomas was truly international. Some of his fiercest duels across the green table were fought with French delegates. Much of Mr. Phelan's story is taken up with the record of his journeys. He was equally at home when he went to preach the gospel in the United States or in Soviet Russia, in Spain or in China. Everywhere he devoted his oratorical genius, his remarkable grasp of detail and, above all, his phenomenal energy, to the greater glory of the International Labour Organisation.

Mr. Phelan admits that Thomas got on least well with Englishmen. The English language and English mentality both eluded him ; and his own personality and conception of his office were utterly different from anything normally encountered on this side of the Channel. Sir Eric Drummond

conceived his position at the head of the League Secretariat, after the English fashion, as that of,a.civil ,servant-,,aorrect,, respectful of authority, and almost 'morbidly apprehensive of the limelight. Albert Thomas did not know what bureau- cratic correctitude meant, behaved as if governments were his natural enemies and predestined victims, and considered it one of his primary duties to act as chief publicity agent for the goods he had to sell. He was worshipped by his staff. But it would be useless to claim that, oursidd that narrow circle, most Englishmen found him altogether con- genial. It would be less than fair to maintain that the glory of the International Labour Organisation became, in the eyes of Albert Thomas, not a means, but an end in itself ; and it would be certainly unfair to pretend that the glory of the Organisation came to be identified by him with the glory of Albert Thomas. Yet that was undoubtedly the impression which sometimes remained in stolid Anglo- Saxon minds. That mixture of the fervour of --an apostle, the astuteness of a politician, and the histrionic instinct of a horn showman was something unfamiliar and suspect. Mr. Phelan's book will perhaps do more to explain Albert Thomas to the average Englishman than Albert Thomas could ever have done himself.

Apart from the portrait of its hero, Yes and Albert Thomas is one of the few books yet written which shed light on the humbler day-to-day problenis of an international adminis- tration. The inability of French and British officials to understand one another's methods of bureaucratic organisa- tions, and the suspicions bred thereby, will some day make an amusing chapter in the history of post-War international politics. But Albert Thomas was sui generis. Even the head of a French department does not normally insist on reading and signing himself every letter which goes out