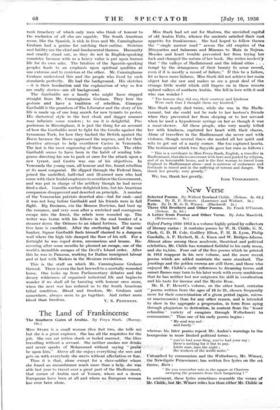 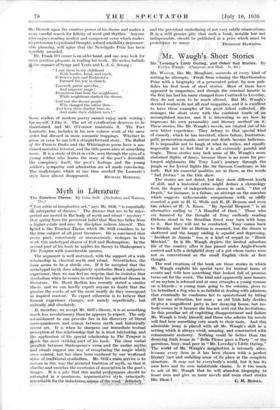 A Letter from Pontus and Other Verse. By John Masefield. (Heinemann. 6s.)

Oxford Poetry 1910-1913 is a volume highly prized by collectors of literary curios : it contains poems by W. R. Childe, G. N. Clark, G. D. H. Cole, Godfrey Elton, P. H. B. Lyon, Philip Guedalla, A. P. Herbert, R. A. Knox and W. Bridges-Adams. Almost alone among these academic, theatrical and political celebrities, Mr. Childe has remained faithful to his early muse, and she to,him. -Four out of the five poems which he printed in 1913 reappear in his new volume, and the more recent

poems which are added maintain the same standard. The joustings and the golden crowns are still there, and those who enjoyed Mr. Childe's early references to dreaming towns and sunset flames may turn to his later work with every confidence that he has neither lost nor outgrown his skill in versification and his taste for incense and the Mystic Rose.

Mr. R. P. Hewett's volume, on the other hand, contains `;poems written from the ages of 16 to 21, chosen frequently more for their concretization of a given period (again, micro- or macrocosmic) than for any other reason, and is intended to show in the aggregate a progression, in form from aping through plagiarism to derivation, in content from the ' lesser celandine ' variety of eseapism . through Weltschmerz to communism." Thus one of his early poems begins :

whereas his hiter poeMs repeat- Mr.' Auden's warnings to the bourgeoisie in more limited- political-terms :

there's mrthing for it but to pay: Little man, into the night ; the Workers of the ivoerdanite."

Untouched by communism and the Weltschtnerz, Mr. Winser, . the bieivdigate Prize-winner, has written five lyrics on the set theme, Rain :

" Do you remember rain in the square at Chartres sweeping the peasants from their bargaining ? "

Mr. Hewett upon the emotive power of his theme and makes a more careful search for felicity of word nnd-Thyttirri. --Anyone. who enjoys reading modest and competent verse which makes; no pretensiontophifoandthought, refined Sentibilii$44nemor-; able phrasing, will- iiiree that the Newaigate Prize has been', rt - Mr. Frank O'Connoris an-olderIlgugl, and one may look for More positive pleasure in reading his work, tie writes ballads'

the mariner Of Synge and Yeats and L. A. G. Strong :

. "I saw them in my childhood

With bonfire, band, and torch, O'Brien's men and Redmond's Pursued the war in church. . . • , . • Farewell, poetic speeches, . And unpoetic songs ! Drummers that beat the neighbours; While neighbours slashed the drums.

Who changed the colour then— And keep their shadow from us, And make their children men!"

Borne readers of modern poetry cannot enjoy such writing : for myself, I like it. The art of versification deserves to be maintained, and Mr. O'Connor maintains it. The Poet

Laureate, too, includes in his new voluine ivork of the same order but dressed in more romantic trappings. Whether in

prose or verse lie can tell a straightforward story. The Ballad of Sir Francis Drake and the Whittington poem have a sus-

tained narrative interest, and the title-poem aims at something more. It is a study of Ovid in exile, seen through the eyes of a Young soldier who learns the story of the poet's downfall; the conspiracy itself, the poet's feelings „and the young soldier's sympathy and admiration are all made convincing.

'Khe modernisms which at one time marked the Laureate's • • worthily awarded.