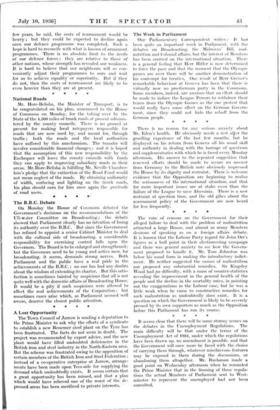 Page 3, 10 July 1936 — The vote of censure on the Government for their alleged
Close

The vote of censure on the Government for their alleged

failure to deal with the problem of malnutrition attracted a large House, and almost as many Members desirous of speaking as on a foreign affairs debate. It is known that the Labour Party regard Sir John Orr's figures as a bull point in their electioneering campaign and there was general anxiety to see how the Govern- ment proposed to handle it. Mr. Tom Johnston was below his usual form in making the introductory indict- ment. He neither suggested the causes of malnutrition nor proposed any substantial remedies. Sir Kingsley Wood had no difficulty, with a mass of counter-statistics revealing the improvement in the general health of the people and the decline in the mortality rates, in pointing out the exaggerations in the Labour case, but he was a little weak when he came to constructive remedies for such malnutrition as undoubtedly does exist. It is a question on which the Government is likely to be severely pressed by its own supporters as much as the Opposition before this Parliament has run its course.