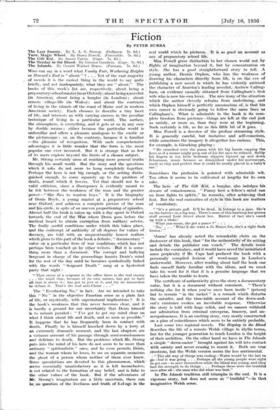 WHO can say in a word what Vanity Fair, Wuthering Heights

or Howard's End is " abOnt" ? . . . Yet of the vast majority of novels it is the easiest thing in the world to say quite briefly, and not inadequately, what they are " about." The books of this week's list are, respectively, about ,being a ;•, preparatory-school Master (near dxford) ; about being a novelist (in America), about being, a burglar (in London) ; about remote village-life (in Wales) ; and about the contrasts

of living in the islands off the coast of Maine and in modern American society. Each chooses to 'describe a tiny facet of life, and interests, us with varying success in the peculiar technique of -living • in. a particular world. The surface, • the atmosphere, is everything, and it, gets at us in any case by double . means ; either. because • the particular world is unfamiliar and offers a pleasure analogous to the exotic or the picturesque; or, 9n the contrary, bemuse it is familiar —the pleasure of recognition. With such comprehensive advantages it is- little wonder that the • -form is the most popular one ever invented. But it is strange that so- few

of its users explore beyond the limits of a chosen subject. ' • Mr. Strong certainly 'aims nt reaching more general truths through his.srnall- world. But the story and -the -questions which it asks do not seem to hang completely -together.

Perhaps, the hero is not big enough, or the setting distin- • guished eneugh, to _come squarely up to the problem of . death, iound which it hovers. Yet that should not be a , valid criticism, since a discrepancy is evidently meant to be felt 'between the weakness of the man and the greater

power—" like- - flies to wanton boys." It is the biography of Denis, Boyle, a young .master. at a_ preparatory school near, :O:ieford, and achieves a complete picture of the man and us circle in spite of an uneven proportioning ofepisOdes. Almost half the book is taken-up with a day spent in 'Oxford towards the end of the *4e...where Denis goes, before the medical, board ' to obtain- exemption Iron* military service. The foully sordid conditions 'under which - this' takes place, . and the contempt of authority of all degrees. for values of decency,, are told -with an unquestionably honest realism which gives to this part of the book a definite, ." documentary " value on a particular item of war conditions which has not perhaps been touched qn by other Writers: -Ilia it is some thing more than a document. The corrupt and bullying Sergeant in charge of the proceedings haunts Denis's mind for the rest of the day until he becomes symbolically linked

with the words "Sergeant Death" sung at a hysterical party that night : " That swine of a sergeant in the office there is the real enemy . . . the mind that, because of its own nature, has got to hate all that is above it ; has got to jeer at it, and try its damnedest to debase it. That's the real anti-Christ . .

The " Everlasting No," in fact. Are we intended to take this " No" in the objective Faustian sense as a plain fact of life, or mystically, with supernatural implications ? It is the book's weakness that this never becomes clear, and it is hardly a ground for our uncertainty that Denis himself is to remain puzzled : " I've got to get my mind clear on what think about life and death, and as soon as possible."

It happens that he has frequently been in contact with death. Finally he is himself knocked down by a lorry at

an extremely dramatic moment, and the last chapters are a virtuoso account of his passage through semi-consciousness and delirium to death. But the problems which Mr. Strong puts into the mind of his hero do not seem to be more than ordinary " spiritualistic " ones, and he even permits Denis, and the woman whom: he loves, to see on separate. Occasions the ghost of a person whom neither of them ever knew. Some speculations are devoted to this pheiriimenori, which seems essentially unsatisfactory as it is left inconclusive, is not related to the formation of any belief, and is false to the other values of the book. But if the adventures of Mr. Strong's .imagination are a little uncertain, there can be no question of the liveliness and truth of ft.eIligi in the

real world which he pictures. It is as good an account as any of preparatory school life.. '

MissI'OweIl gives distinction to her. chosen world not.* flights of imagination beyond it, but by concentration on style. .She has a good .straightforward .story to tell. A Young author, Dennis .Orphen, who has the weakness of drawing his charaeterS directly from life, is on • the. eve of Publishing a new novel -in which he has violently satirised the character of Amelietes'leading novelist, ' Andrew

ham, oS 'evidence casually Obtained froth- Callinghaih's first Wife who is now his own lover. -The nice irony Of the situation Which the author cleverly refrains from underlining; and which Orphen himself is perfectly' unconscious Of, is that his own career is obviously going to follow the same lines as .Callingliam's.. What is admirable in the book is -its com- plete freedom from pretence—things are left at the end just as 'untidy, or more so, than they were at the beginning. Such certainly is life, as for as this little bit of it goes, ;

Miss Powell is a devotee of the profuse streaming

It is generally careful, but imitative and self-conscions, while sometimes the Imagery is altogether too curiOus".- This,

for example; is: Gieseking playing :. , - " He crouched over the piano with his big hands cupping the 'keys as if.a mousemight peep out of his fist once he relaxed. Softly iis fingers in ten little bedroom slippers tiptoed pp and down Schumann, music became so diminished under liis- i;nicroscope, made so tiny and perfect that it could be neatly placed in a baby's ear."

Sometimes the profusion is pointed with admirable wit. Too often it- seems to be cultivated at lengths for its own

The hero of The Gilt :Aid, a burglar, also indulges his

stream of consciousness. "Funny heraf a -felloW's blind tan on from lights to Spittle," he remarks, after achieving that feat. But the real curiosities of style iii this book are Matters of vocabulary. :: • "'It's a private gaff.. It'll be dead2.1t_helongs.to_a jaue. She's on the batter—in a big way. There's none of this-hawking-her-greens stuff around Lisle Street about her. Matter of fact she's cased up with a bloke.'

brama.' " • 'Janus' has already noted, the remarkable claim on the

dustcover of this book, -that "for the authenticity of its setting and details the publisher can vouch." The details must include the vocabulary, and-it would haVesaved thiVainitiated some perplexity if Mr. Cape had prefaced the book with a personally compiled lexicon of word-usage n 'London's underworld. However, after reading about half the book one finds oneself fairly familiar with' the 'idiom, and we must take his word for it that it is a genuine language that we have taken the trouble to learn.

The certificate of authenticity gives the story a documentary value, but it is a document without comment. " There's nothing else for it when you've once been inside " (prison) but to remain "in the racket" is a remark which disturbs the outsider, and the time-table account of the down-and- out's existence evokes an inevitable response. Otherwise the story is told with huge relish, and we cannot -withhold our admiration from criminal enterprise, bravery, and un- scrupulousness. It is an exciting story, very neatly constructed on a plan of coincidences which seem to be entirely probable.

Last come two regional novels. The Heyday in the Blood describes the _life of a remote Welsh village in idyllic terms, but for the younger generation to reach London is the height of their ambition. On the other hand we have in The Islands a simple " down-easter " brought against his will into contact Itith society and never- iceasing to resent it. Both are true **notions, but the Welsh version seems the less sentimental. . " The old way of things was ending—Wales would be the last to go—but it was going . . . Perhaps all -the young people were right to get out—to save themselves while the blood was young, and they had the strength to do things . . . Perhaps these were the truthful

ones after all—the ones who did what was best." —

Iii The Islands tradition still triumphs in the end. It is a vigorous story, but does not seem so "truthful ",–in that imaginative Welsh sense.