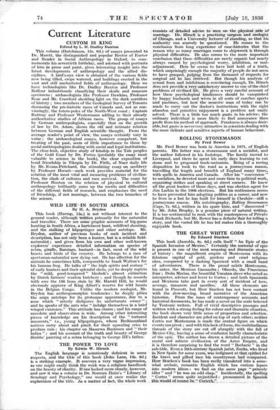 By H. A. Bryden This book (Harrap, 10a) is not without interest to the general reader, although written primarily for the naturalist and traveller. There are some graphic accounts of big-game hunting in South Africa, a hartebeest hunt, wildfowl shooting, and the stalking of klipspringer and other antelope. Mr. Bryden, author of previous books of such incident and description, has not only been a hunter, but is a reliable field- naturalist ; and gives from his own and other well-known explorers' experience detailed information on species of zebra, giraffe, flamingo, bustard—in fact, most of the wild beasts and birds of the country. He belongs to a race of sportsman-naturalist now dying out. He has affection for the animals he sometimes kills, comparable to Izaak Walton's for his famous frog. He talks of " the high spirits and ecstasy " of early hunters and their splendid shots, yet he deeply regrets the " mild, good-tempered " blesbok's almost extinction by Dutch farmers' wanton butchery ; and though he records with awe the 136 lions slain by Mr. Harold Hill, he would obviously approve of King Albert's reserve for wild beasts in the Belgian Congo. Unlike the modern zoologist, Mr. Bryden has anthropomorphic tendencies : he deeply pities the saiga antelope for its grotesque appearance, due to a nose which " utterly disfigures its unfortunate owner " ; and he speaks of the ants who indulge themselves in a brief winged existence." This attitude has charm ; and his range of anecdote and observation is wide. Among other interesting pieces of knowledge are his description of the " tortured innocents," i.e., young ldipspringers, whoM BeChuanakind natives carry about and pinch for their squealing cries to produce rain ; his chapter on Masarwa Bushmen and " their ladies " ; and his account of the truth and beauty of George Stubbs' painting of a zebra belonging to George III's father.