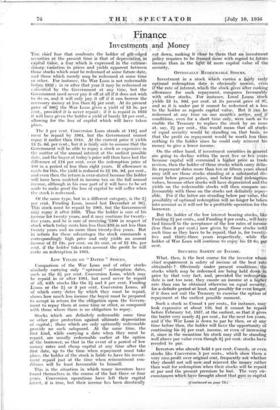 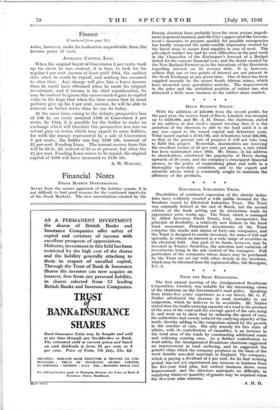 THE chief fear that confronts the holder of gilt-edged securities at the present time is that of dePreCiatWin Capital ishie, a fear :Which is expressed, in the extraor-, dinary,:iariation;in prices and yields apparent between those stocks which must be redeemed at some future date, and those which merely may be redeemed at some time or other. For instance, the War Loan is not redeemable before_ ; in or after .that year it may boredeemed or coGerted by the Government at . time, but the Government need never pay it off at all if it does not wish to do so, and it. will only pay it off if it can borrow the necessary money st; less than 85 per cent. At "its-present price of 1065 the War Loan gives a yield of £3 6s, per cent., provided it is never repaid ; if it is repaid in 1952 it will have given the holder a yield of barely £3 per cent., allowing for the loss of capital which will have taken place.

The 5 per cent. Conversion Loan stands at 118i and must be repaid by 1964, but the Government -cannot repay it earlier than 1944. A.t.the current price it yields £4 2s. 6d. per Cent., but it is fairly safeto assume that the Government will be able to repay a stock so expensive in the matter of the annual interest at the earliest possible date, and the buyer at today's price will then have lost the difference of £18 per cent. over the redemption price of 100 in a period of less than eight years. If allowance is made for this, the yield is reduced to £2 10s:-9d. per cent., and even' then the return is over-stated because the holder will have been mulcted in income tax. on the full annual income, although in his case part of it will have to be set aside to make good the loss of capital he will suffer when the stock is redeemed.

Of the same type, but in a different category, is the 25 per cent. Funding Loan, issued last December' at 961. This- stOck must be repaid by 1961, but the Government inaY repay it after 1956. Thus the holder is sure of his income for twenty years; and it may continue for twenty- five years, and he is sure of -receiving 11103 in respect of stock which today costs him less than,i95;in not less than twenty. years and no more than twenty-fire years. But in return for these advantages the stock commands a correspondingly high price and only yields an annual income of £2 18s. per cent. on its cost, or of £2 16s. per cent. if the holder takes into account the profit he will make on redemption. in 1961.

Comparison of the War Loan and of other stocks similarly carrying only " optional " redemption dates, such 'as the 31 per cent. Conversion Loan, which may be repaid in or after 1961, but need never be repaid at all, with stocks like the 24 and 3 per cent. Funding Loans or the 25 or 8 per cent. Conversion Loans, all of which carry dates by which they must be repaid, shows how much less income the buyer must be prepared to accept in return for the obligation upon the Govern- ment to repay them at some time or other, as compared with those where there is no obligation to repay.

Stocks which are definitely redeemable some time or other give protection against ultimate, depreciation of capital ; those which are only optionally redeemable provide no such safeguard. At the same time, the first kind, while carrying a date when they must be repaid, are usually redeemable earlier at the option of the borrower, ;so that in the event of -a period of low money rates and cheap capital at any time after the first date, up to the time when repayment must take place, the holder of the stock is liable to have his invest- ment repaid just at the time when reinvestment con- ditions will be least favourable to himself.

This is the situation in which many investors have found themselves in the Course of the last three or four years. Conversion operations have left their capital intact, it is true, but their income has been drastically cut down, making it clear to them that an investment policy requires to be framed more with regard to future income than in the light Of mere capital value of the seenrity.

money to give a lower income. • On the other hand, if investment securities in general are going to decline within the next' five or. ten yeais because capital will command A highei ptiee as _trade revives, then the holder of those Stocks which carry dap- , ite repayment dates more than ten. or fifteen years ahead may still see those stocks standing at a substantial dis- count below present prices, and ,below final redemption values, because other stocks will have depreclated and.f he yields on the redeemable stocks will then compare un- favourably with those on the stocks not definitely repay- 'able. For if the latter are standing below par value, the possibility of optional redemption will no longer betaken into account as it will not be a profitable operation for the borrower. : . .- . . . .

But the holder of the low interest bearing stocks„ like Funding 2i per cents., and Funding 3 per cents., will 11a r tied himself to the acceptance of the low rates of ineothe (less than per cent.) now given by those stocks 'until such time as they have to be repaid, that is, for twenty.? five _ and , thirtY-three yeari respectively,„ while the holder of War Loan will continue to enjoy his £3 6s4 per cent.

What, then, is the best course for the investor whO5k chief requitement it safety of income :at the best** obtainable ? Obviously • under present conditions! stocks which may be redeemed are being held dovep price by that very fact, and; provided the• redemption date is not too near, they ensure an income at a higher rate than can be obtained otherwiSe on equal security', fora-definite-periethat-least,--and possiblrfor even longer; if it does not suit the Treasury to exercise the option of repayment at the earliest possible moment.

- Such a stock as Consol 4 per cents., for instance, may look expensive at about ' 116, but it cannot be repaid before February 1st, 1957, at the_earliest, so that it gives the bnyt-r very nearly 35 per cent., for the next ten years, and if the War Loan is down to par by then, or at any time before then, the holder will have the opportunity of continuing his 34 per cent. income, or even of increasing it, since in the meantime his stock may still be standing well above par value even though 31 per cent. stocks have receded to par.

Investors ;who already hold 4 per. cent. Consols; or even, stocks like Conversion 5 per cents., which slic4 ihem a' very nice,profit, over original cost, frequently ask whether they should not sell now and reinvest the money .rather than wait for redemption when their stocks will be repaid at par and the present premium be lost: The very cir- cumstances which haVe brought .aboufthat gain iri capital (Continued on page 78.) OPTIONALLY.:REDEEMABLE' STOCKS.

Investment in a stock which carries a fairly- early optional redemption date is ohvionsly unwise, even Iflihe rate of interest, which the stock giveiiifter making -allowance for such repayment; compares favourably with other stocks. For instance, Local LOans •'stock yields £8 is. 10d. per cent. at ,its present .price of 97, and as it is under par it cannot be redeemed 1.t.ti loss to the Molder as regards capital value. But it "can be redeemed at any time on one month's notice, and if conditions, even for 'a short tithe only, were such .as to enable the Treasury to replace the stock by an issue at, say, 25 per cent., this would mean that all stocks of equal security would be :standing ;on_ that basis,: so that the profit on repayment would be worth -less quill *nothing to the holder since he could only reinvest his

(Continued from page 76.) value, however, make its realisation unprofitable from the income point of view.

When the original-buyer of Conversion 5 per cents. took up his stock he was content, it is true, to look for his regular 5 per cent. income at least until 1944, the earliest date when he could be repaid, and nothing has occurred to alter that. Any change will give him a lower income than he could have obtained when he made his original investment, and if income is his chief consideration, he may be content to ignore this uncovenanted gain in capital value in the hope that when the time comes that he must perforce give up his 5 per cent. income, he will be able to reinvest on better terms than he can do today.

At the same time, owing to the definite prospective loss of £18 5s. on every nominal £100 of Conversion 5 per cents. by 1944, it is possible for the holder to make an exchange which will translate this prospective loss into an actual gain on terms which may appeal to some holders, for with the money represented by a sale of Conversion 5 per cents., the holder can buy Z26 lOs. nominal of 24 per cent. Funding Loan. The annual income from this will be £3 2s. 3d. instead of £5 as at present, but when the 24 per cent. Funding Loan comes to be repaid, his original capital of £100 will have increased to £126 10s.