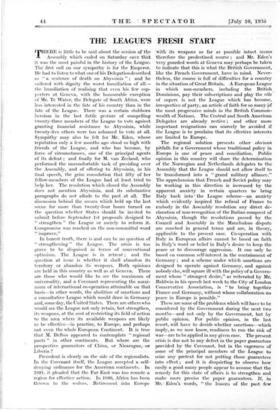 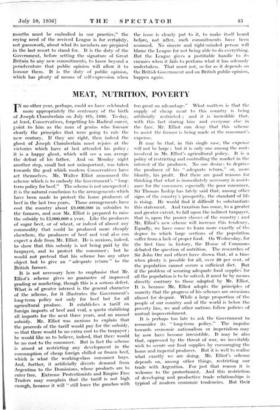 THERE is little to be said about the session of the Assembly which ended on Saturday save that it was the most painful in the history of the League. The first call on our sympathy is for the Emperor. He had to listen to what one of his Delegation described as a sentence of death on Abyssinia " ; and he suffered with dignity the worst humiliation of all— the humiliation of realising that even his. few sup- porters at Geneva, with the honourable exception of Mr. Te Water, the Delegate of South Africa, were less interested in the fate of his country than in the fate of the League. There was a certain stubborn heroism in the last futile gesture of compelling twenty-three members of the League to vote against granting financial assistance to Abyssinia,. while twenty-five others were too ashamed to vote at all. Sympathy may also be felt for Mr. Eden, whose reputation only a few months ago stood so high with friends of the League, and who has become, by force of circumstances, one of the principal agents of its defeat ; and finally for M. van Zeeland, who performed the uncomfortable task of presiding over the Assembly, and of offering to Abyssinia, in his final speech, the grim consolation that fifty of her fellow-members of the League had at least tried to help her. The resolution which closed the Assembly does not mention Abyssinia, and its substantive paragraphs do not allude to the past at all. The discussion behind the scenes which held up the last .seene_ for more than twenty-four hours turned on the question whether States should be invited to submit before September 1st proposals designed to " strengthen " the League or merely to reform it. Compromise was reached on the non-committal word !` improve."

In honest truth, there is and can be no question of " strengthening " the League. The crisis is too grave to be disguised in terms of conventional optimism. The League is in. retreat ; and the question at issue is whether it shall abandon its territory or abandon its weapons. Both opinions are held in this country as well as at Geneva. There are those who would like to see the maximum of universality, and a Covenant representing the maxi- mum of international co-operation attainable on that basis—in other words, the abolition of sanctions and a consultative League which would draw in Germany and, some day, the United States. There are others who would see the League not only retain, but strengthen, its weapons, at the cost of restricting its field of action to the area where its available weapons are likely to be effective—in practice, to Europe, and perhaps not even the whole European Continent. It is true that M. Delbos appeared to contemplate " regional pacts " in other continents. But where are the prospective guarantors of China, or Nicaragua; -or Liberia ?

Precedent is clearly on the side of the regionalists. In the Covenant itself, the League accepted- a --self-. denying ordinance for the American continents.,. In 1981, it pleaded that the Far East -was-too remote a region for effective action. In 1936, Africa has been thrown to the wolves. Retirement. into Europe with its weapons so far as possible intact seems therefore the predestined course ; and Mr. Eden's very guarded words at Geneva may perhaps be taken to indicate that this is what the British GoVernment, like the French Government, have in mind. Never- theless, the course is full of difficulties for a country in the situation of Great Britain. A European League in which non-members, including the British Doininions, pay their subscriptions and play the role of supers is not the League which has become, irrespective of party, an article of faith for so many pf the most progressive minds in the British Common- wealth of Nations. The Central and South American Delegates are already restive ; and other more important resignations can scarcely be avoided -if the League is to proclaim that its effective interests are limited to Europe.

The regional solution presents other obvious pitfalls for a Government whose traditional policy in Europe is one of peace and conciliation. Public opinion in this country will share the determination of the Norwegian and Netherlands delegates to the Assembly that the League should not allow itself to be transformed into a " grand military alliance." The apprehension that French and Soviet policy may be working in this direction is increased by the apparent anxiety in certain quarters to bring Italy back into the League scheme--an anxiety which evidently inspired the refusal of France to embody in the Assembly resolution any direct de- claration of-non-recognition of the Italian conquest of Abyssinia, though the resolutions passed by the Council and Assembly in the Manchukuo dispute are couched in general terms and are, in theory, applicable to the present case. Co-operation with Italy in European affairs cannot be based on faith in Italy's word or belief in Italy's desire to keep the peace or to discourage aggression. It can only be based on common self-interest in the-containment of Germany ; and a scheme under which sanctions are designed to operate against Germany, and against nobody else, will square ill with the policy of a Govern- ment whose " strongest desire," as reiterated by Mr. Baldwin in his speech last week to the City of London Conservative Association, is " to bring together France and Germany, without whose collaboration no peace in Europe is possible."

These are some of the problems which will have to be considered by the Government during the next two months—and not only by the Government, but by public opinion. For public opinion, in the last resort, will have to decide whether sanctions--which imply, as we now know, readiness to run the risk of war—are to be applied in any given case. The present crisis is due not to any defect in the paper guarantees provided by the Covenant, -but in the eagerness of some of the principal members of the, League to seize any pretext for not putting those guarantees into effect ; and it is disquieting to observe how easily a good many people appear to assume that the remedy for this state of affairs is to strengthen and Make more precise the paper guarantees. If, in Mr.., Eden's- words, -" the lessons of the Past few months must be embodied in our practice," the crying need of the revived League is for _certainty, not guesswork, about what its members are prepared in the last resort to stand for. It is the duty of the Goiernnient, before setting the signature of Great Britain to any new commitments, to know beyond a peradventure that public opinion will allow, it to honour them. It is the duty of public opinion, Which has plenty of means of self-expression when the issue is clearly put to it, to make itself heard bef9re, not -After, Such • commitments have been assumed. No sincere and right-minded person will blame the League for not being able to do everything. But the League gives a justifiable handle to its enemies when it fails to perform what it solemnly undertaken. That must not, so far as it depends on the British Government and on British public opinion, happen again.