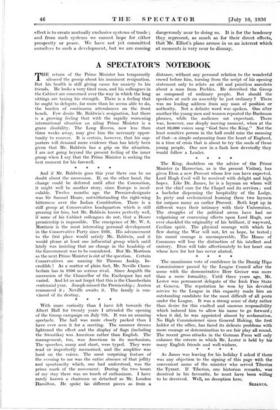 A SPECTATOR'S NOTEBOOK T HE return of the Prime Minister has

temporarily silenced the gossip about his imminent resignation. But his health is still giving cause for anxiety to his friends. He looks a very tired man, and his colleagues in the Cabinet are concerned over the way in which the long sittings are taxing his strength. There is a feeling that he ought to delegate, .far more than he seems able to do, the burden of continuous attendances on the front bench. Few desire Mr. Baldwin's resignation, but there is a growing feeling that with the rapidly worsening international situation an ailing Prime Minister is a grave disability. The Long Recess, now less than three weeks away, may give him the necessary oppor- tunity to recover. It is certain, however, that his sup- porters will demand more evidence than has lately been given that Mr. Baldwin has a grip on the situation. I am not going beyond the present feeling of the inner group when I say that the Prime Minister is seeking the best moment for his farewell.

* * And if Mr. Baldwin goes this year there can be no doubt about the succession. If, on the other hand, the change could be deferred until after the Coronation, it might well be another story, since Europe is incal- culable. Twelve months ago the Premier-designate was Sir Samuel Hoare, notwithstanding the right-wing bitterness over the Indian Constitution. There is a stiff group at Conservative headquarters which is still pressing for him, but Mr. Baldwin knows perfectly well, if some of his Cabinet colleagues do not, that a Hoare premiership is impossible. The emergence of Mr. W. S. Morrison is the most interesting personal development in the Conservative Party since 1931. His advancement to the first place would satisfy Mr. Baldwin, and it would please at least one influential group which until lately was insisting that no change in the headship of the Government was to be considered. But Mr. Morrison as the next Prime Minister is out of the question. Certain Conservatives are naming Sir Thomas Inskip. In- credible ! As a matter of plain fact, Mr. Neville Cham- berlain has in 1936 no serious rival. Since Asquith the succession of the Chancellor of the Exchequer has not varied. And let us not forget that this is the Chamberlain centennial year. Joseph missed the Premiership ; Austen renounced it ; Neville awaits it. The family is con- vinced of its destiny. * * * * With more curiosity than I have felt towards the Albert Hall for twenty years I attended the opening of the Group campaign on July 7th. It was an amazing spectacle. The hail was more closely packed than I have ever seen it for a meeting. The summer dresses lightened the effect and the display of flags (including the Swastika) was American rather than English. The management, too, was American in its mechanism. The speeches, many and short, were typed. They were read or imperfectly memorised, and the amplifier was hard on the voices. The most surprising feature of the evening to me was the entire absence of that jollity and spontaneity which, one had understood, was the prime mark of the movement: During the two hours of my stay there was no touch of enthusiasm. I have rarely known a chairman so detached as Mr. Loudon Hamilton. He spoke his different piecet as from a distance, without any personal relation to the wonderful crowd before him, turning from the script of his opening statement only to relate an old and pointless anecdote about a man from Peebles. He described the Group as composed of ordinary people. But should the speakers at such an assembly be just ordinary ? There was no leading address from any man of position or authority. Not a definite word was spoken. One after another the young men and women repeated the Buchman phrases, while the audience sat expectant. There was, however, one deeply moving moment, when at the start 10,000 voices sang " God Save the King." Not the least sensitive person in the hall could miss the meaning of that—a simple outpouring from the heart of England, in a time of crisis that is about to try the souls of those young people. One saw in a flash how devotedly they would follow a Leader.

* * * * The King, doubtless on the advice of the Prime Minister (a Harrovian, as is the present Visitor), has given Eton a new Provost whom few can have expected. Lord Hugh Cecil will be received with delight and high hopes. Like Dr. James, he is a layman on whom will rest the chief care for the Chapel and its services ; and a bachelor dispensing the hospitality of the Lodge. In piety and ecclesiastical learning these two laymen far surpass many an earlier Provost. Both kept up in different ways their intimacy with their Universities. The struggles of the political arena have had no vulgarising or coarsening effects upon Lord Hugh, nor ever shackled the originality of his brilliant, if wayward, Cecilian spirit. The physical courage with which he flew during the War will not, let us hope, be tested ; his moral courage is unconquerable. The House of Commons will lose the distinction of his intellect and oratory. Eton will take affectionately to her heart one whose love for her has never abated.

* * The unanimous vote of confidence in the Danzig Hign Commissioner passed by the League Council after the scene with the demonstrative Herr Greiser was more than a mere formality. Until three years ago, Mr. Lester was permanent delegate of the Irish Free State at Geneva. The reputation he won by his devoted service to the League in this capacity made him an outstanding candidate for the most difficult of all posts under the League. It was a strong sense of duty rather than desire for this exalted and onerous responsibility which induced him to allow his name to go forward ; when it did, he was appointed almost by acclamation. No High Commissioner since General Raking, the first holder of the office, has faced its delicate problems with more courage or determination to see fair play all round. The recent gross attacks in the German Press will only enhance the esteem in which Mr. Lester is held by his many English friends and well-wishers. * * * * As Janus was leaving for his holiday I asked if there • was any objection to the signing of this page with the convenient name of the minister who served Tiberius the Tyrant. If Tiberius, one historian remarks, was deceived in his favourite, he must have been willing to be deceived. Well, no deception here.