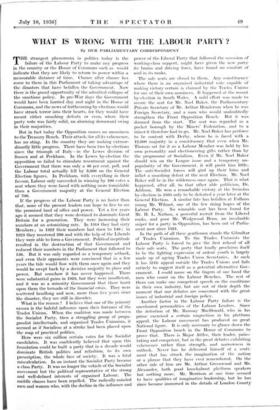 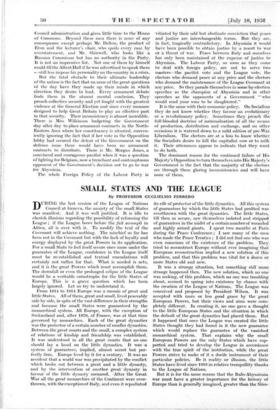 WHAT IS WRONG WITH TILE LABOUR PARTY ?

By OUR PARLIAMENTARY CORRESPONDENT But in fact today the Opposition causes no uneasiness to the. Treasury Bench. Their attack, for all its vehemence, has no sting. In the country they are making extraor- dinarily little progress. There have been two by-elections since the triumph of Italy—in the Lewes division of Sussex and at Peckham. In the Lewes by-election the opposition so failed to stimulate resentment against the Government that there was only a 40 per cent. poll, and the Labour total actually fell by 3,000 on the General Election figures. In Peckham, with everything in their favour, Labour only succeeded in winning by 100 votes a seat where they were faced with nothing more formidable than a Government majority at the General Election of 700.

If the progress of the Labour Party is no faster than that, none of the present leaders can hope to live to see the promised land of office and power. Yet a. few years ago it seemed that they were destined to dominate Great Britain for a generation. They were increasing their numbers at an astonishing rate. In 1918 they had sixty Members ; in 1922 their numbers had risen to 140 ; in 1923 they mustered 260 and with the help of the Liberals they were able to form a Government. Political ineptitude resulted in the destruction of that Government and reduced their numbers in the Parliament that followed to 160. But it was only regarded as a temporary setback, and even their opponents were convinced that in a few years the tide would flow with them once again and they would be swept back by a decisive majority to place and power. But somehow it has never happened. There were substantial gains in 1929, but they were insufficient, and it was as a minority Government that there burst upon them the tornado of the financial crisis. They were scattered headlong and now, more than five years since the disaster, they are still in disorder.

What is the reason ? I believe that one of the primary causes is the baleful influence upon their fortunes of the Trades Unions. When the coalition was made between the Socialist Party, then a struggling group of propa- gandist intellectuals, and organised Trades Unionism, it seemed as if Socialism at a stroke had been placed upon the map of practical politics. Here were six million certain votes for the Socialist candidates. It was confidently believed that upon this foundation could be built a party that in a decade would dominate British politics and refashion, to its own prescription, the whole face of society. It was a fatal miscalculation. In an instant the Socialist Party became a class Party. It was no longer the vehicle of the Socialist movement but the political representative of the strong and well-defined interests of organised Labour. The middle classes have been repelled. The radically-minded men and women who, with the decline in the influence and power of the Liberal Party that followed the secession of working-class support, might have given the new party its brains and driving force, have found no comfort of soul in its ranks.

The safe seats are closed to them. Any constituency where there is an organised industrial vote capable of making victory certain is claimed by the Trades Unions' for one of their own nominees. It happened at the recent by-election in South Wales. A mild effort was made to secure the seat for Mr. Noel Baker. the Parliamentary Private Secretary of Mr. Arthur Henderson when he was Foreign Secretary, and a man who would undoubtedly strengthen the Front Opposition Bench: But it was doomed from the start. The seat was regarded as a pocket borough by the Miners' Federation, and to a miner it therefore had to go. Mr. Noel Baker has perforce to be content with Derby, where he is faced with a 12,000 majority in a constituency that even when Mr. Thomas sat for it as a Labour Member was held by his own personality and electioneering gifts rather than by the programme of Socialism. Even if Mr. Noel Baker should win on the League issue and a temporary un- popularity of the Government, it will profit him little. The anti-Socialist forces will gird up their loins and inflict a smashing defeat at the next Election. Mr. Noel Baker will be in the wilderness once again. That is what happened, after all, to that other able politician, Dr. Addison. He won a remarkable victory at the Swindon by-election in 1934 only to be defeated a year later at the General Election. A similar fate has befallen at Fulham young Mr. Wilmot, one of the few rising hopes of the Labour Party. No winnable seat has been found for Mr. H. L. Nathan, a powerful recruit from the Liberal ranks, and poor Mr. Wedgwood Beim, an invaluable sniper for a party in Opposition, has been out of Parlia- ment now since 1931.

In the path of all these gentlemen stands the Gibraltar of Trades Unionism. To the Trades Unionists the Labour Party is forced to give the first refusal of all their safe seats. The party that loudly proclaims itself to be the fighting expression of ardent youth is largely made up of ageing Trades Union Secretaries. As such it has little appeal outside the Trades Unions and fails entirely to suggest itself as a potential alternative Gov- ernment. I could name on the fingers of one hand the men who count on the Labour Benches. The rest of them can make one competent speech on the conditions in their own industry, but are out of their depth the moment that our debates are concerned with the great issues of industrial and foreign policy.

Another factor in the Labour Party failure is the uncoloured personalities of the Labour Leaders. Since the defection of Mr. Ramsay MacDonald, who in his prime exercised a certain magnetism in his platform appeal, the Labour movement has produced no great National figure. It is only necessary to glance down the Front Opposition bench in the House of Commons to prove that. There is Major Attlee, their leader, pains- taking and competent, but in the great debates exhibiting vehemence rather than strength, and narrowness in outlook. Never has he delivered himself of a senti- ment that has struck the imagination of the nation or a phrase that they have ever remembered. On the other side of him are Mr. Arthur Greenwood and Mr. Alexander, both good knockabout platform speakers but nothing more. Mr. Morrison at one time seemed to have qualities of imaginative leadership, but he has since become immersed in the details of London County Council administration and_gives.little tinie to the House of Commons. Beyond these men there • is' none of any consequence except perhaps Mr. Dalton, the product of Eton and the lecturer's chair, who spoils every Case by overstatement, and Mr. Shinwell, who looks like'. a Russian Commissar but has no authority in the • Party. It is not an impressive list. Not one of them by himself could fill the Albert/fall if he was advertised to speak there —still less impose his personality on the country in a crisis.

But the fatal obstacle to their ultimate leadership of the nation is the fact that on none of the great questions of the day have they made up their minds in which direction they desire to lead. Every armament debate finds them in the utmost mental confusion. They preach collective security and yet fought with the greatest violence at the General Election and since every • measure designed to help Great Britain to play an effectiVe part in that security. Their inconsistency- is almost incredible. There is Miss Wilkinson badgering the Government day after day to place armament contracts in the North- Eastern Area where her constituency is situated, conven- iently ignoring the fact that if her vote in the Opposition lobby had secured the defeat of the Government on the defence issue there would have been no armament contracts to distribute. There is Mr. Morgan Jones, a convinced and courageous pacifist when it was a question of fighting for Belgium, now a trenchant and contemptuous opponent of the Government's decision not to go to war for Abyssinia.

The whole Foreign Policy of the Labour Party is vitiated by their odd but obstinate conviction that peace and justice are interchangeable terms. But they are, in fact, tragically contradictory. In Abyssinia it would have been possible to obtain justice by a resort to war or a threat of war. Peace between Italy and ourselves hris only been maintained at the expense of justice to Abyssinia. The Labour Party, so soon as they come to dial with foreign policy, are out to serve two masters—the pacifist vote and the League vote, the electors who dernand peace at any price and the electors who demand the maintenance of the League Covenant at any price. So they'parade themselves in stimely-election speeches as the champion of Abyssinia and in other speeches as the opponents of a GoVernment " who would send your sons to be slaughtered."

It is the same with their economic policy. On Socialism they do not know whether they favour"an evolutithiary or a revolutionary policy. Soinetimes they preach the full-blooded doctrine of nationalisation of all the means of production, distribution and exchange, and On Other occasions it is watered down to a mild edition of pre-War Liberalism. The electors are at a loas to know Whether the Socialists desire to kill the capitalist cow or to milk it. Their utterances appear to indicate that they want to do both.

The dominant reason for the continued failure of His Majesty's Opposition to turn theMSelveS into His Majesty's Government is the fact that the majority of the electors see through these glaring inconsistencies and will have none of them.