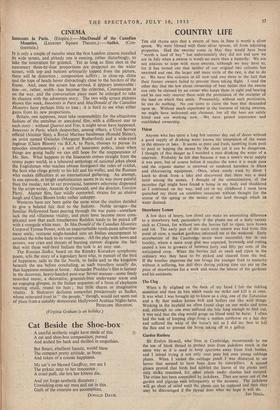 Innocents in Paris. (Empire.)—MacDonald of the Canadian

Mounties. (Leicester Square Theatre.) Sadk6. (Con- tinentale.) IT is only a couple of months since the first London cinema installed its wide screen, and already one is coming, rather disturbingly, to take the innovation for granted. Yet as long as films shot in the customary three-by-four proportions are projected on the wider screen, with top and bottom arbitrarily lopped from the picture, there will be distortion ; composition suffers ; in close-up, chins and the tops of heads hover distractingly close to the borders of the frame. And, once the screen has arrived, it appears immovable : size—or, rather, width—has become the criterion, Cinemascope is on the way, and the conversation piece must be enlarged to take its chances with the adventure story. The two wide screen pictures shown this week, Innocents in Paris and MacDonald of the Canadian Mounties have perhaps little to lose ; it is hard to see what either gains from its new proportions.

Britain, one supposes, must take responsibility for the ubiquitous fashion of the omnibus or anecdotal film, with a different star to each story : without Quartet and Trio, it might never have happened.

. Innocents in Paris, which despatches, among others, a Civil Service official (Alastair Sim), a Royal Marines bandsman (Ronald Shiner), an artist named Gwladys (Margaret Rutherford) and a wide-eyed ingenue (Claire Bloom) via B.E.A. to Paris, chooses to pursue its episodes simultaneously ; a sort of insurance policy, since when things are going badly we can still hope for the reappearance of . Mr. Sim. What happens to the Innocents comes straight from the comic paper world, in kl laboured anthology of national jokes about the Englishman who teaches obtuse foreigners the rules of ci icket, the Scot who clings grimly to his kilt and his wallet, and the Russian who makes difficulties at an international gathering. An attempt, in one episode, at bright sophistication seems in its way more painful than the insular, not to say provincial, humours otherwise dispensed by the script-writer, Anatole de Grunwald, and the director, Gordon Parry. Alastair Sim, face wildly contorted, strains for an elusive laugh and Claire Bloom looks rather unhappy.

Westerns have not been quite the same since the studios decided to give a belated fair deal to the Indians. Noble savages—the familiar Hollywood faces peering through the war paint—somehow lack the old villainous vitality, and plots have become more com- plicated now that each treacherous Redskin tends to be paired off with a renegade white man. In MacDonald of the Canadian Mounties Corporal Tyrone Power, with an imperturbable tooth-paste advertise- ment smile, ventures single-handed into an Indian encampment to conduct the tribe back to its reservation. All the play with bows and arrows, war cries and threats of burning cannot disguise the fact that with these well-bred Indians the task is an easy one.

The Russian Sadko, based on the Rimsky Korsakov symphonic poem, tells the story of a legendary hero who, in pursuit of the bird of happiness, sails to the far North, to India and to the kingdom beneath the sea before concluding, as such travellers usually do, that happiness remains at home. Alexander Ptushko's film is fantasy in the decorous, heavy-handed post-war Soviet manner—some finely recorded music, a decorative, greenish-blue underwater scene and an engaging glimpse, in the Indian sequence, of a force of elephants wearing small, round tin hats ; but little charm or imaginative vitality. S. Stolyarov declaims somewhat ponderously as Sadko, whose reiterated trust in " the people," though, would not seem out of place from a suitably democratic Hollywood Arabian Nights hero.

(Virginia Graham is on holiday.)