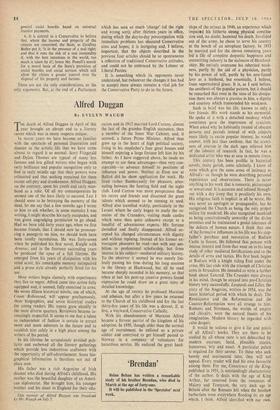 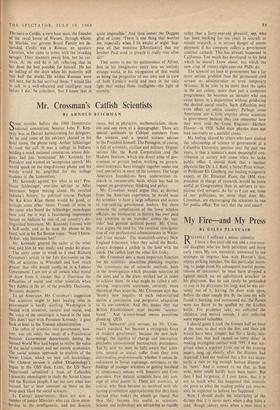 THE death of Alfred Duggan in April of this year brought an abrupt end to a literary career which was in many respects unique.

In recent years we have become so familiar with the spectacle of personal frustration and disaster in the artistic life that we have come almost to regard it as normal. Scott Fitzgerald and Dylan Thomas are typical of many less famous and less gifted writers who began with early brilliance and popular recognition only to find in early middle age that their powers were exhausted and that nothing remained for them except self-pity and drunkenness. Alfred Duggan, on the contrary, spent his youth and early man- hood as a rake. Of all my contemporaries he seemed one of the least likely to succeed. Lest I should seem to be betraying the memory of the dead, let me say that a few months ago I wrote to him to ask whether, in some memoirs I was writing, I might describe his early escapades, and was given ungrudging permission to go ahead. Had we been told forty years ago, when we first became friends, that I should now be pronoun- cing a panegyric on him, we should both have been totally incredulous. He was forty-seven when he published his first novel, Knight with Armour, and in the fourteen succeeding years he produced the opus of a full lifetime. He emerged from his years of dissipation with his mind acute, his remarkable memory unimpaired and a prose style already perfectly fitted for his use.

Most writers begin clumsily with experiments they live to regret. Alfred came into action fully equipped and, it seemed, fully exercised in arms. He wrote fifteen historical novels, one of which, Count Bohemond, will appear posthumously, three biographies, and seven historical studies for young readers. His repute grew steadily in the most diverse quarters. Reviewers became in- creasingly respectful. It seems to me that a talent so independent of fashion is certain to attract more and more admirers in the future and to establish him safely in a high place among the writers of his period.

In his lifetime he scrupulously avoided pub- licity and eschewed all the literary gatherings which provide less industrious craftsmen with the opportunity of self-advertisement. Some bio- graphical information is therefore not out of place now.

His father was a rich Argentine of Irish descent who died during Alfred's childhood. His mother was the beautiful daughter of an Ameri- can diplomatist. She brought him, his younger brother and his sister to England for their edu-

This memoir of Alfred Duggan was broadcast by Air. Waugh on July 2.

cation and in 1917 married Lord Curzon, almost the last of the grandee English statesmen, then a member of the Inner War Cabinet, and, it seemed, a future Prime Minister. Alfred thus grew up in the heart of high political society, living in his stepfather's four great houses and himself enjoying a large fortune left him by his father. As I have suggested above, he made no attempt to use these advantages—then very con- siderable—to advance himself to positions of influence and power. Neither at Eton nor at Balliol did he show application for work. He lived rather flamboyantly for pleasure, alter- nating between the hunting field and the night club. Lord Curzon was more perspicuous than his tutors and friends and discerned the great talents which seemed to be running to seed. Alfred also travelled widely, particularly in the Levant where he early began to study the re- mains of the Crusaders, visiting made castles which were then quite unknown except to a handful of adventurous experts. His fortune dwindled and finally disappeared. Alfred ac- cepted his changed circumstances with dignity and without repining. Instead of his former ex- travagant pleasures he read—not with any am- bition to professional scholarship, but from interest in his subject—mediveval military history. To the observer it seemed he was merely list- lessly passing his time during his long sessions in the library at Hackwood, but all he read became sharply recorded in his memory, so that when at last his pent-up creative powers found expression he could draw on a great store of detailed knowledge.

At the age of twenty he professed Marxism and atheism, but after a few years he returned to the Church of his childhood and for the last thirty-five years of his life was a devout, if, at first, a wayward, Conservative Catholic.

With his abandonment of Marxism Alfred became a fervent patriot of the kingdom of his adoption. In 1939, though older than the normal age of recruitment, he enlisted as a private soldier and contrived to get himself posted to Norway in a company of volunteers for hazardous service. He endured the great hard-

ships of the retreat in 1940, an experience which impaired his hitherto strong physical constitu- tion and, no doubt, hastened his death. Invalided out of the army, he chose to serve his country at the bench of an aeroplane factory. In 1953 he married and for the eleven remaining years led a life of complete domestic happiness and unremitting industry in the seclusion of Hereford- shire. He entirely overcame his inherited weak- ness, partly by the aid of a physician, partly by his power of will, partly by his new-found love as a husband, but essentially, I believe, from supernatural grace. It is, as I said before, the antithesis of the popular pattern, but it should be remarked that even in the time of his dissipa- tion there was always a gravitas in him, a dignity and courtesy which transcended his weakness.

Such in brief was his life, known to only a few friends. His work stands as his memorial. He spoke of it with a detached modesty which sometimes gave the impression of cynicism. When asked why he habitually treated of obscure persons and periods instead of with subjects more likely to excite popular interest, he would answer, with less than candour, that the scanti- ness of sources in the dark ages relieved him of the labours of research. In fact, he was a dedicated artist who was at ease in remote times.

This century has been prolific in historical novels, many garish, some scholarly. I know of none which give the same sense of intimacy as Alfred's—as though he were describing personal experiences and observations There is never anything in his work that is romantic, picturesque or sensational. It is accurate and infused through- out with a dry irony that is peculiarly his own. His religious faith is implicit in all he wrote. He was never an apologist or propagandist, but he recognised the Church as being the only proper milieu for mankind. He also recognised mankind as being constitutionally unworthy of the divine promises and he maintained a genial tolerance of the defects of human nature. I think that one of the formative influences in his life was his step- father's purchase and restoration of Bodiam Castle in Sussex. He followed that process with intense interest and from that went on to his long study of other medimval fortifications and to the details of arms and tactics. His first book begins at Bodiam with a knight riding East under the cross. His last ends with the triumph of Christian arms in Jerusalem. He intended .to write a further book about Tancred. The Crusades were always in his mind, though he strayed into pre-Christian history very successfully. Leopards and Lilies, the story of the Angevins, written in 1954, was the latest historical period with which he dealt. The Renaissance and the Reformation and the Counter-Reformation were all strange to him. Romans and Normans, the worlds of empire and chivalry, were the natural founts of his imagination. Modern history he regarded with calm despair.

It would be tedious to give a list and précis of all Alfred's books. They are there to be studied by all whose taste is not debauched by modern excesses; lucid, . plausible stories, humorous, wry and exact. A particular palate is required for their savour. To those who seek bawdy and sentimental tales, they will not appeal. Every reader will find his own favourite among them. For me, Conscience of the King, published in 1951, is outstandingly characteristic of the author. It deals with the age of King Arthur, far removed from the romances of Malory and Tennyson, the very dark age in Britain after the Romans left when the heathen barbarians were everywhere flooding in; an age which, I think, Alfred identified with our own.

The hero is Cerdic, a very base man, the founder of the royal house of Wessex, through whom, by Matilda, our present Royal Family are de- scended. Cerdic was a Roman, an apostate Christian, who came to terms with the invading savages. Their manners revolt him, but he sur- vives. At the end he is left reflecting that he has done the best possible for himself. He has no inkling of the days when his posterity will rule half the world. He wishes Romans were Still here, but he has survived them. 'I would like to talk to a well-educated and intelligent man before I die,' he considers, 'but I know that is quite impossible.' And then comes the Duggan glint of irony. 'There is one thing that worries me, especially when I lie awake at night. Sup- pose all that nonsense [Christianity] that my brother Paul used to preach is really true after all?'

That seems to me the quintessence of Alfred, first in his imaginative entry into an entirely strange world, in his recognition of that world as being the progenitor of our own and in view of both Cerdic's 'world and ours in the only light that makes them intelligible—the light of eternity.