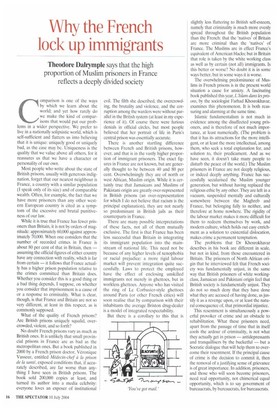 Why the French lock up immigrants

Comparison is one of the ways by which we learn about the world; and yet how rarely do we make the kind of comparisons that would put our problems in a wider perspective. We prefer to live in a nationally solipsistic world, which is self-sufficient and flatters us into believing that it is unique: uniquely good or uniquely bad, as the case may be. Uniqueness is the quality that we value above all others, for it reassures us that we have a character or personality of our own.

Most people who write about the state of British prisons, usually with generous indignation, forget that our nearest neighbour is France, a country with a similar population (I speak only of its size) and of comparable wealth. Often, for example, the fact that we have more prisoners than any other western European country is cited as a symptom of the excessive and brutal punitiveness of our law.

While it is true that France has fewer prisoners than Britain, it is not by orders of magnitude: approximately 60,000 against approximately 70,000. When one considers that the number of recorded crimes in France is about 80 per cent of that in Britain, then — assuming the official figures of either country have any connection with reality, which is far from certain — it follows that France actually has a higher prison population relative to the crimes committed than Britain does. Whether you consider this is a good thing or a bad thing depends, I suppose, on whether you consider that imprisonment is a cause of or a response to criminality. What is clear, though, is that France and Britain are not so very different, at least in this respect, as is commonly supposed.

What of the quality of French prisons? Are British prisons uniquely squalid, overcrowded, violent, and so forth?

No doubt French prisons vary as much as British ones. It is unlikely that small provincial prisons in France are as bad as the metropolitan ones. But a book published in 2000 by a French prison doctor, Veronique Vasseur, entitled Medecin-chef a la prison de la sante, exposed conditions that, if accurately described, are far worse than anything I have seen in British prisons. The book sold 200,000 copies at least, and turned its author into a media celebrity: everyone loves an exposer of institutional

evil. The filth she described, the overcrowding, the brutality and violence, and the corruption among the warders were without parallel in the British system (at least in my experience of it). Of course there were furious denials in official circles, but most people believed that her portrait of life in Paris's central prison was essentially accurate.

There is another startling difference between French and British prisons, however, and that is in the vastly higher proportion of immigrant prisoners. The exact figures in France are not known, but are generally thought to be between 40 and 80 per cent. Overwhelmingly they are of north or west African, Muslim origin. While it is certainly true that Jamaicans and Muslims of Pakistani origin are greatly over-represented in British prisons (an over-representation for which I do not believe that racism is the principal explanation), they are not nearly so predominant in British jails as their counterparts in France.

There are many possible interpretations of these facts, not all of them mutually exclusive. The first is that France has been less successful than Britain in integrating its immigrant population into the mainstream of national life. This need not be because of any higher levels of xenophobia or racial prejudice: a more rigid labour market will prevent integration quite successfully. Laws to protect the employed have the effect of enclosing unskilled immigrants not merely in ghettoes, but in workless ghettoes. Anyone who has visited the ring of Le Corbusier-style ghettoes around Paris (or other French cities) will soon realise that by comparison with their inhabitants the average Brixton drug-dealer is a model of integrated respectability.

But there is a corollary to this that is slightly less flattering to British self-esteem, namely that criminality is much more evenly spread throughout the British population than the French: that the 'natives' of Britain are more criminal than the 'natives' of France. The Muslims are in effect France's equivalent of American blacks; but in Britain that role is taken by the white working class as well as by certain (not all) immigrants. Is this better or worse? No doubt it is in some ways better, but in some ways it is worse.

The overwhelming predominance of Muslims in French prisons is in the present world situation a cause for anxiety. A fascinating book published this year, L'Islam dans les prisons, by the sociologist Farhad Khosrokhavar, examines this phenomenon. It is both reassuring and alarming at the same time.

Islamic fundamentalism is not much in evidence among the disaffected young prisoners, and is therefore of not much importance, at least numerically. (The problem is that it has its attractions for the more intelligent, or at least the more intellectual, among them, who seek a total explanation for, and solution to, their predicament. And as we have seen, it doesn't take many people to disturb the peace of the world.) The Muslim prisoners in France are not deeply religious, or indeed deeply anything. France has successfully secularised the Muslim younger generation, but without having replaced the religious ethic by any other. They are left in a vacuum, suspended mentally and culturally somewhere between the Maghreb and France, but belonging fully to neither, and therefore at home nowhere. The rigidity of the labour market makes it more difficult for them to redeem themselves by work, and modern culture, which holds out easy enrichment as a solution to existential dislocation, makes crime a permanent temptation.

The problems that Dr Khosrokhavar describes in his book are different in scale, but not in kind, from those encountered in Britain. The prisoners of North African origin that he interviewed felt that French society was fundamentally unjust, in the same way that British prisoners of white workingclass, Jamaican and Pakistani origin feel that British society is fundamentally unjust. They do not so much deny that they have done what they are accused of having done, as justify it as a revenge upon, or at least the natural consequence of, that primordial injustice.

This resentment is simultaneously a powerful provoker of crime and an obstacle to rehabilitation. What these prisoners need, apart from the passage of time that in itself cools the ardour of criminality, is not what they actually get in prison — antidepressants and tranquillisers by the bucketful — but a Socratic dialogue that will help them to overcome their resentment. If the principal cause of crime is the decision to commit it, then the removal of a justifying sense of grievance is of great importance. In addition, prisoners, and those who will soon become prisoners, need real opportunity, not chimerical equal opportunity, which is to say government of bureaucrats, by bureaucrats, for bureaucrats.