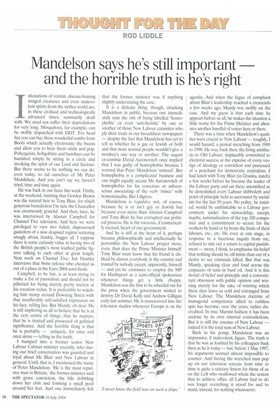 1 nfestations of vermin, disease-bearing winged creatures and even malevolent spirits from the nether world are, in these civilised and technologically advanced times, summarily dealt with. We need not suffer their depredations for very long. Mosquitoes, for example, can be swiftly dispatched with DDT. For head lice you can buy these wonderful combs from Boots which actually electrocute the beasts and allow you to hear them sizzle and pop. Poltergeists, hobgoblins and banshees can be banished simply by sitting in a circle and invoking the spirit of our Lord and Saviour. But there seems to be nothing we can do, even today, to rid ourselves of Mr Peter Mandelson. And you can't say we haven't tried, time and time again.

He was back in our faces this week. Firstly, at the weekend, insisting that Gordon Brown was the natural heir to Tony Blair, for which generous benediction I'm sure the Chancellor was enormously grateful. And then, later, he was interviewed by Alastair Campbell for Channel Five television. And here we were privileged to view two failed, dispossessed gauleiters of a now despised regime nattering smugly about, frankly, bugger all. I suppose there is some curiosity value in having two of the British people's most loathed public figures talking to each other at great length. Next week on Channel Five: Ian Huntley interviews that Swiss referee who cheated us Out of a place in the Euro 2004 semi-finals.

Campbell, to be fair, is at least trying to make a fist of journalism and should not be pilloried for being merely pretty useless at his vocation redux. It is preferable to watching him stamp around Downing Street with that insufferably self-satisfied expression on his face, telling lies. But Mandy: oh dear. He is still imploring us all to believe that he is at the very centre of things, that he matters, that he is trusted and possessed of political significance. And the horrible thing is that he is probably — uniquely, for once and once alone — telling us the truth.

I bumped into a former senior New Labour Cabinet minister recently, who during our brief conversation was guarded and loyal about Mr Blair and New Labour in general. Until, that is, I mentioned the name of Peter Mandelson. 'He is the most repulsive man in Britain,' the former minister said with grave conviction, the bile dribbling down her chin and forming a small pool around her feet. And one immediately felt that the former minister was if anything slightly understating the case.

It is a delicate thing, though, attacking Mandelson in public, because one immediately runs the risk of being labelled 'homophobic' or even 'anti-Semitic' by one or another of those New Labour catamites who ply their trade in our broadsheet newspapers — despite the fact that Mandelson has yet to tell us whether he is gay or Jewish or both and that most normal people wouldn't give a monkey's one way or another. The august ex-commie David Aaronovitch once implied that I was guilty of homophobia because I averred that Peter Mandelson 'minced'. But homophobia is a complicated business and one might equally accuse Mr Aaronovitch of homophobia for his conscious or subconscious associating of the verb 'mince' with homosexuality. But I digress.

Mandelson is repulsive not, of course, because he is or isn't gay or Jewish but because even more than Alastair Campbell and Tony Blair he has corrupted our political process. He is the vacuous, if cosmetically excised, heart of our government.

And he is still at the heart of it, perhaps because philosophically and intellectually he personifies the New Labour project more, even, than does the Prime Minister himself. Tony Blair must know that his friend is disliked by almost everybody in the country and trusted by nobody except, apparently, himself — and yet he continues to employ the MP for Hartlepool as a semi-official spokesman whenever things get a little choppy. Mandelson was the first to he wheeled out for the press when the government wished to destroy Dr David Kelly and Andrew Gilligan early last summer. He is manoeuvred into the television studios whenever Europe is on the agenda. And when the fugue of complaint about Blair's leadership reached a crescendo a few weeks ago, Mandy was swiftly on the case. And my guess is that each time he appears before us all, he makes the situation a little worse for the Prime Minister and alienates another handful of voters here or there.

There was a time when Mandelson's qualities were crucial to New Labour — roughly, I would hazard, a period stretching from 1989 to 1996. He was, back then, the living antithesis to Old Labour; implacably committed to electoral success at the expense of every vestige of ideology or conviction and possessed of a penchant for democratic centralism. I had lunch with Tony Blair (in Granita, natch) a few weeks before he became the leader of the Labour party and sat there astonished as he demolished every Labour shibboleth and point of principle held as sacrosanct by socialists for the last 50 years. No policy, he insisted, would be unthinkable to a Labour government under his stewardship, except, maybe, nationalisation of the top 100 companies and a commitment to secure for the workers by hand or by brain the fruits of their labours, etc., etc. He even at one stage, in response to a facetious inquiry from me, refused to rule out a return to capital punishment — more, I think, to emphasise his belief that nothing should be off-limits than out of a desire to see criminals killed. But that was Mandy, speaking clear and loud across the carpaccio of tuna in basil oil. And it is this denial of belief and principle and a concomitant obsession with public opinion and winning merely for the sake of winning which these days leave us cold and estranged from New Labour. The Mandelson doctrine of managerial competence allied to ruthless spin has become, over the years, rather discredited. In true Marxist fashion it has been undone by its own internal contradictions. But it is still the essence of New Labour — indeed it is the total sum of New Labour.

Back in his pomp, Mandelson was an impressive, if malevolent, figure. The truth is that he was as loathed by his colleagues back then as he is today — but, before 1 May 1997, his arguments seemed almost impossible to counter. And having the wretched man pop up on our television screens from time to time is quite a salutary lesson for those of us on the Left who swallowed whole the notion that to achieve office all Labour had to do was forget everything it stood for and to stand, instead, for nothing whatsoever.