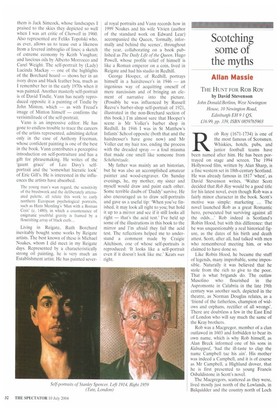 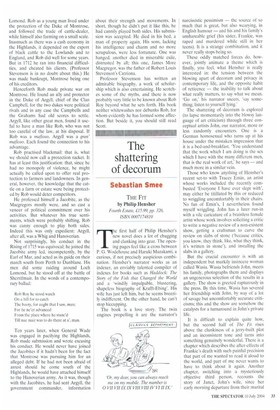 Scotching some of the myths

THE HUNT FOR ROB ROY by David Stevenson John DonaldIBerlinn, West Newington House, 10 Newington Road, Edinburgh EH 9 I QS, £16.99, pp. 339, ISBN 0859765903 ob Roy (1671-1734) is one of the most famous of Scotsmen. Whiskies, hotels, pubs, and junior football teams have been named after him. He has been portrayed on stage and screen. The 1994 Hollywood film, written by Alan Sharp, is a fine western set in 18th-century Scotland. He was already famous in 1817 'when', as David Stevenson writes, 'Walter Scott decided that Rob Roy would be a good title for his latest novel, even though Rob was a fairly minor character in the book. Scott's motive was simple: marketing ... The novel launched Rob as a great Romantic hero, persecuted but surviving against all the odds...' Rob indeed is Scotland's Robin Hood, but with this difference: that he was unquestionably a real historical figure, as the dates of his birth and death attest. Scott, after all, had talked with men who remembered meeting him, or who claimed to have done so.

Like Robin Hood, he became the stuff of legends, many improbable, some impossible. Naturally it was believed that he stole from the rich to give to the poor. That is what brigands do. The outlaw Musolino who flourished in the Aspromonte in Calabria in the late 19th century was another such, depicted in the theatre, as Norman Douglas relates, as a `friend of the fatherless, champion of widows and orphans, rectifier of all wrongs'. There are doubtless a few in the East End of London who will say much the same of the Kray brothers.

Rob was a Macgregor, member of a clan outlawed in 1603 and forbidden to bear its own name, which is why Rob himself, as Alan Breck informed one of his sons in Kidnapped, 'had the ill-taste to clap the name Campbell tae his am'. His mother was indeed a Campbell, and it is of course as Mr Campbell, a Highland drover, that he is first presented to young Francis Osbaldistone in Scott's novel.

The Macgregors, scattered as they were, lived mostly just north of the Lowlands, in Balquidder and the country north of Loch Lomond. Rob as a young man lived under the protection of the Duke of Montrose, and followed the trade of cattle-dealer, while himself also farming on a small scale. Inasmuch as there was a cash economy in the Highlands, it depended on the export of black cattle to the Lowlands and to England, and Rob did well for some years. But in 1712 he ran into financial difficulties, and cheated his clients. (Professor Stevenson is in no doubt about this.) He was made bankrupt, Montrose being one of his creditors.

Henceforth Rob made private war on Montrose. He found an ally and protector in the Duke of Argyll, chief of the Clan Campbell, for the two dukes were political rivals and in any case the Campbells and the Grahams had old scores to settle. Argyll, like other great men, found it useful to have a man like Rob, who was not too careful of the law, at his disposal. If Rob was a mafioso, Argyll was a gran' mafioso. Each found the connection to his advantage.

Rob practised blackmail: that is, what we should now call a protection racket. It has at least this justification: that, since he had no monopoly of violence, he might actually be called upon to offer real protection to farmers and landowners. In general, however, the knowledge that the cattle on a farm or estate were being protected by Rob would deter competitors.

He professed himself a Jacobite, as the Macgregors mostly were, and so cast a veneer of political commitment over his activities. But whatever his true sentiments, which were probably shifting, Rob was canny enough to play both sides. Indeed this was only expedient: Argyll, after all, was a Whig and Hanoverian.

Not surprisingly, his conduct in the Rising of 1715 was equivocal; he joined the Jacobite army led, incompetently, by the Earl of Mar, and acted as its guide on their march south from Perth to Dunblane. His men did some raiding around Loch Lomond, but he stood off at the battle of Sherrifmuir. In the words of a contemporary ballad:

Rob Roy he stood watch On a hill for to catch The booty, for aught that I saw, man; For he ne'er advanced From the place where he stanc'd Till nae mair was to do there at a', man.

Ten years later, when General Wade was engaged in pacifying the Highlands, Rob made submission and wrote excusing his conduct. He would never have joined the Jacobites if it hadn't been for the fact that Montrose was pursuing him for an alleged debt. If he had not been afraid of arrest should he come south of the Highlands, he would have attached himself to the Hanoverian army. As it was, though with the Jacobites, he had sent Argyll, the government commander, information about their strength and movements. In short, though he didn't put it like this, he had cannily played both sides. His submission was accepted. He died in his bed, a man of property again. His sons, lacking his intelligence and charm and no more scrupulous, were less fortunate. One was hanged, another died in miserable exile, distrusted by all; this one, James More Macgregor, was the father of Robert Louis Stevenson's Catriona.

Professor Stevenson has written an admirable biography, a work of scholarship which is also entertaining. He scotches some of the myths, and there is now probably very little to be known about Rob Roy beyond what he sets forth. His book neither whitewashes nor debunks Rob, for whom evidently he has formed some affection. But beside it, you should still read Scott.