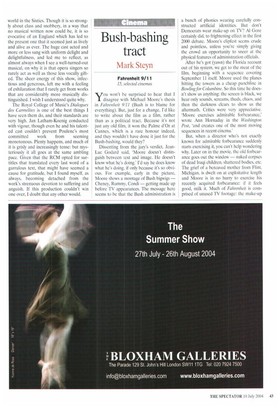 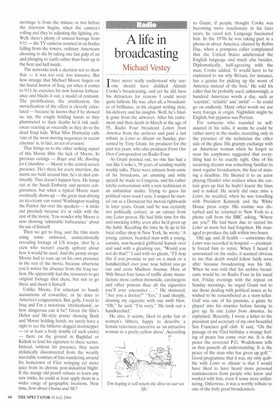 Fahrenheit 9/11 15, selected cinemas you won't be surprised to hear that I disagree with Michael Moore's thesis in Fahrenheit 9/11 (Bush is to blame for everything). But, just for a change, I'd like to write about the film as a film, rather than as a political tract. Because it's not just any old film, it won the Palme d'Or at Cannes, which is a rare honour indeed, and they wouldn't have done it just for the Bush-bashing, would they?

Dissenting from the jury's verdict, JeanLuc Godard said, 'Moore doesn't distinguish between text and image. He doesn't know what he's doing.' I'd say he does know what he's doing, if only because it's so obvious. For example, early in the picture, Moore shows a montage of Bush bigwigs — Cheney, Rummy, Condi — getting made up before TV appearances. The message here seems to be that the Bush administration is

a bunch of phonies wearing carefully constructed artificial identities. But don't Democrats wear make-up on TV? Al Gore certainly did, to frightening effect in the first 2000 debate. Moore's clipfest seems crude and pointless, unless you're simply giving the crowd an opportunity to sneer at the physical features of administration officials.

After he's got (yawn) the Florida recount out of his system, we get to the meat of the film, beginning with a sequence covering September 11 itself. Moore used the planes hitting the towers as a cheap punchline in Bowling for Columbine. So this time he doesn't show us anything: the screen is black, we hear only sounds, screams, thuds, chaos, and then the darkness clears to show us the aftermath. Critics were very appreciative. 'Moore exercises admirable forbearance,' wrote Ann Hornaday in the Washington Post, 'and creates one of the most moving sequences in recent cinema.'

But, when a director who's not exactly known for admirable forbearance suddenly starts exercising it, you can't help wondering why. Later on in the movie, the old forbearance goes out the window — naked corpses of dead Iraqi children, shattered bodies, etc. The grief of a bereaved mother from Flint, Michigan, is dwelt on at exploitative length and Moore is in no hurry to exercise his recently acquired forbearance: if it feels good, milk it. Much of Fahrenheit is comprised of unused TV footage: the make-up montage is from the minute or two before the interview begins, when the camera's rolling and they're adjusting the lighting, etc. Well, there's plenty of unused footage from 9/11 — the TV cameras zoomed in on bodies falling from the towers, ordinary Americans choosing to die by taking one last gulp of air and plunging to earth rather than burn up in the heat and hell inside.

The networks took a decision not to show that — it was too real, too intrusive. But how strange that Michael Moore lingers on the brutal horror of Iraq, yet when it comes to 9/11 he exercises his now famous forbearance and blacks it out, a model of restraint. The prettification, the artsification, the moviefication of the effect is cleverly calculated — because he knows that if he showed us, say, the couple holding hands as they plummeted to their deaths he'd risk audiences reacting as viscerally as they do to the dead Iraqi kids. What Miss Homaday calls 'one of the most moving sequences in recent cinemas' is, in fact, an act of evasion.

That brings us to the other striking aspect of this Moore film: the lack of Moore. In previous outings — Roger and Me, Bowling for Columbine — Moore is the central screen presence. He's there for every interview, the stunts are built around him, he's in shot continually. That doesn't happen here. He hangs out at the Saudi Embassy and pesters congressmen, but when a typical Moore stunt eventually shows up — the great man driving an ice-cream van round Washington reading the Patriot Act over the speakers — it sticks out precisely because it's at odds with the rest of the movie. You wonder why Moore is now showing 'admirable forbearance' about his use of himself.

Then we get to Iraq, and the film starts using some awkward, unintentionally revealing footage of US troops, shot by a crew who weren't exactly upfront about how it would be used. And the penny drops: Moore had to ease up on his own presence in the rest of the movie, because otherwise you'd notice his absence from the Iraq section. He apparently had the resources to get original footage shot there, but not to go there and shoot it himself.

Unlike Moore, I'm reluctant to bandy accusations of cowardice, as he does to America's congressmen. But, golly, I went to Iraq and I'm a notorious `chickenhawle, so how dangerous can it be? Given the film's Dubya and Me-style poster showing Bush and Moore holding hands, we surely have a right to see the hitherto dogged doorstepper — or at least a body double (if such exists) — there on the ground in Baghdad or Kirkuk to lend his signature to these scenes. Instead, without his presence, they seem stylistically disconnected from the wearily inevitable routines of him wandering around his hometown of Flint wringing yet more juice from its chronic post-industrial blight. If the mangy old pooch refuses to learn any new tricks, he could at least apply them in a wider range of geographic locations. Next time, how about Osama and Me?