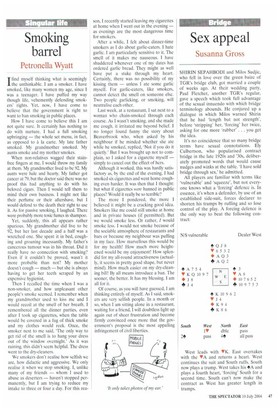 Ifind myself thinking what is seemingly the unthinkable. I am a smoker. I have smoked, like many women my age, since I was a teenager. I have puffed my way though life, vehemently defending smokers' rights. Yet, now, I have come to believe that the government is right to want to ban smoking in public places.

How I have come to believe this I am not quite sure. It certainly has nothing to do with nurture. I had a full smoking upbringing — the whole set menu, in fact, as opposed to a la carte. My late father smoked. My grandmother smoked. My aunts smoke and my mother smokes.

When non-relatives wagged their stainfree fingers at me, I would throw my family at them. My grandmother lived to be 92. My aunts were hale and hearty. My father got cancer at 79, but the doctor said there was no proof this had anything to do with his beloved cigars. Then I would tell them to mind their own business. I might not like their perfume or their aftershave, but I would defend to the death their right to use it. As for passive smoking, I laughed. There were probably more toxic fumes in shampoo.

Yet, suddenly, this all appears rather spurious. My grandmother did live to be 92, but her last decade and a half was a wretched one. She spent it in bed, coughing and groaning incessantly. My father's cancerous tumour was in his throat. Did it really have no connection with smoking? Even if it couldn't be proved, wasn't it more probable than not? My mother doesn't cough — much — but she is always having to get her teeth scraped by an expensive hygienist.

Then I recalled the time when I was a non-smoker, and how unpleasant other people's smoke seemed. I remember when my grandmother used to kiss me and I would recoil at the smell of her breath. I remembered all the dinner parties, even after I took up cigarettes, when the table would be covered in a fug of thick smoke and my clothes would reek. Once, the smoker next to me said, The only way to get rid of the smell is to hang your dress out of the window overnight.' As it was raining, this didn't seem helpful. The dress went to the dry-cleaners.

We smokers don't realise how selfish we are, how didactic and aggressive. We only realise it when we stop smoking. I, unlike many of my friends — whom I used to abuse as deserters — haven't stopped permanently, but I am trying to reduce my intake to three or four a day. For this rea son, I recently started leaving my cigarettes at home when I went out in the evening — as evenings are the most dangerous time for smokers.

After a while, I felt about dinner-time smokers as I do about garlic-eaters. I hate garlic. I am particularly sensitive to it. The smell of it makes me nauseous. I have shuddered whenever one of my dates has ordered garlic bread. They might as well have put a stake through my heart. Certainly, there was no possibility of my kissing them — unless I ate some garlic myself. For garlic-eaters, like smokers, cannot detect the smell on someone else. Two people garlicking, or smoking, will neutralise each other.

Last week, at a restaurant, I sat next to a woman who chain-smoked through each course. As I wasn't smoking, and she made me cough, it irritated me beyond belief. I no longer found funny the story about Beaverbrook who, when asked by his neighbour if he minded whether she ate while he smoked, replied, 'Not if you do it quietly.' But I was brought up not to complain, so I asked for a cigarette myself — simply to cancel out the effect of hers.

Although it worked, this was hardly satisfactory as, by the end of the evening, I had smoked six cigarettes and went home coughing even harder. It was then that I thought: but what if cigarettes were banned in public places? Would it really be so terrible?

The more I pondered, the more I believed it might be a cracking good idea. Smokers like me could still smoke at home and in private houses (if permitted). But we would smoke less. Or rather. I would smoke less. I would not smoke because of the sociable atmosphere of restaurants and bars or because my neighbour was puffing in my face. How marvellous this would be for my health! How much more heightened would be my enjoyment! How splendid for my all-round attractiveness (actually, it seems in pretty good shape, but never mind). How much easier on my dry-cleaning bill! By all means introduce a ban. The sooner, the better. It has my blessing. I am all for it.

Of course, as you will have guessed, I am thinking entirely of myself. As I said, smokers are very selfish people. In a month or so, when I am sitting alone in a restaurant, waiting for a friend, I will doubtless light up again out of sheer frustration and become firmly convinced once more that the government's proposal is the most appalling infringement of civil liberties.