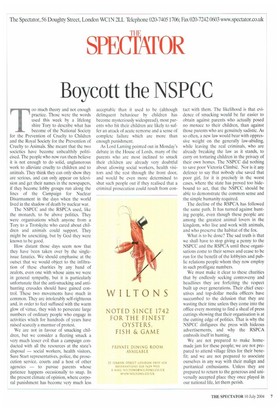 T_ oo much theory and not enough practice. Those were the words used this week by a lifelong shire Tory to describe what has

become of the National Society for the Prevention of Cruelty to Children and the Royal Society for the Prevention of Cruelty to Animals. She meant that the two societies have become unhealthily politicised. The people who now run them believe it is not enough to do solid, unglamorous work to alleviate cruelty to children and to animals. They think they can only show they are serious, and can only appear on television and get their names in the newspapers, if they become lobby groups run along the lines of the Campaign for Nuclear Disarmament in the days when the world lived in the shadow of death by nuclear war.

The NSPCC and the RSPCA used, like the monarch, to be above politics. They were organisations which anyone from a Tory to a Trotskyite who cared about children and animals could support. They might be unexciting, but by God they were known to be good.

How distant those days seem now that they have been taken over by the singleissue fanatics. We should emphasise at the outset that we would object to the infiltration of these charities by any band of zealots, even one with whose aims we were in general sympathy, but it is particularly unfortunate that the anti-smacking and antihunting crusades should have gained control. These two movements have much in common. They are intolerably self-righteous and, in order to feel suffused with the warm glow of virtue, they wish to persecute large numbers of ordinary people who engage in activities which for hundreds of years have raised scarcely a murmur of protest.

We are not in favour of smacking children, but we consider a fleeting smack a very much lesser evil than a campaign conducted with all the resources at the state's disposal — social workers, health visitors, Sure Start representatives, police, the prosecution service, courts and a host of other agencies — to pursue parents whose patience happens occasionally to snap. In the present climate of opinion, where corporal punishment has become very much less acceptable than it used to be (although delinquent behaviour by children has become mysteriously widespread), most parents who hit their children are likely to suffer an attack of acute remorse and a sense of complete failure which are more than enough punishment.

As Lord Laming pointed out in Monday's debate in the House of Lords, many of the parents who are most inclined to smack their children are already very doubtful about allowing social workers, health visitors and the rest through the front door, and would be even more determined to shut such people out if they realised that a criminal prosecution could result from con

tact with them. The likelihood is that evidence of smacking would be far easier to obtain against parents who actually posed no menace to their children, than against those parents who are genuinely sadistic. As so often, a new law would bear with oppressive weight on the generally law-abiding, while leaving the real criminals, who are already breaking the law as it stands, to carry on torturing children in the privacy of their own homes. The NSPCC did nothing to save poor Victoria Climbie. Nor is it any defence to say that nobody else saved that poor girl, for it is precisely in the worst cases, where the state has proved too hidebound to act, that the NSPCC should be able to demonstrate the common sense and the simple humanity required.

The decline of the RSPCA has followed the same path. It has turned against hunting people, even though these people are among the greatest animal lovers in the kingdom, who live and work with animals, and who preserve the habitat of the fox.

What is to be done? The sad truth is that we shall have to stop giving a penny to the NSPCC and the RSPCA until these organisations come to their senses and cease to be run for the benefit of the lobbyists and public relations people whom they now employ in such profligate numbers.

We must make it clear to these charities that by endlessly seeking controversy and headlines they are forfeiting the respect built up over generations. Their chief executives and top-dollar media officers have succumbed to the delusion that they are wasting their time unless they come into the office every morning to find a sheaf of press cuttings showing that their organisation is at the cutting edge of politics. That is why the NSPCC disfigures the press with hideous advertisements, and why the RSPCA embroils itself in hunting.