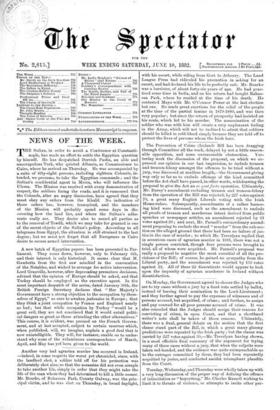 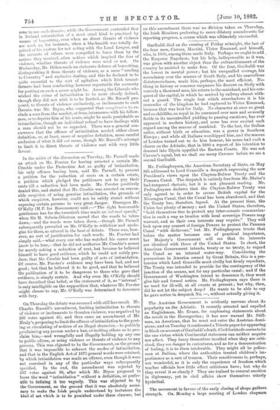 Tuesday, Wednesday, and Thursday were wholly taken up with a

very long discussion of the proper way of defining the offence of intimidation or "boycotting," Mr. Charles Russell wishing to limit it to threats of violence, or attempts to incite other per- sons to use such threats ; while the Government contended that in Ireland intimidation of a most cruel kind is practised by means of boycotting, even when no direct threats of violence are used, as, for instance, when a blacksmith was totally de- prived of his custom for not acting with the Land League, and the servants of others were compelled to leave them by the notices they received, often notices which inspired the fear of violence, whether threats of violence were used or not. On Wednesday, Mr. Dillon made an elaborate defence of boycotting, distinguishing it from threats of violence, as a mere "sending to Coventry" and exclusive dealing, and this he declared to be quite essential to the sort of agitation which Irish tenant- farmers had been conducting, however regrettable the necessity for putting on such a screw might be. Among the Liberals who wished the crime of intimidation to be more closely defined, though they did not wish it to be limited, as Mr. Russell pro- posed, to threats of violence exclusively, or incitements to such threats, was Mr. Bryce, who suggested that conspiracies to ex- clude a man from the market, or from intercourse with his fellow- men, or to deprive him of his rents, might be made punishable as intimidation, though an individual refusal to have dealings with a man should not be so regarded. There was a general con- currence that the offence of intimidation needed either closer definition, or, at least, more of negative definition, more careful exclusion of what it did not mean, though Mr. Russell's attempt to limit it to direct threats of violence met with very little favour.