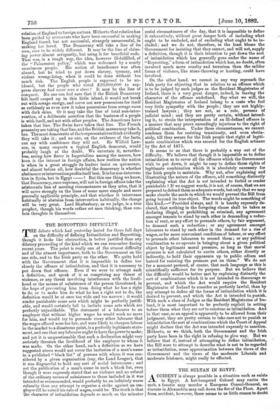 THE debate which had yesterday lasted for three full days on the difficulty of defining Intimidation and Boycotting, though it looks like obstruction, is better justified than any dilatory proceeding of the kind which we can remember during recent years. The point is really one of the utmost difficulty and of the utmost importance, both to the Government on the one side, and to the Irish party on the other. We quite hold with the Government that it is impossible to define too closely the offence of intimidation, and that it is necessary to put down that offence. Even if we were to attempt such a definition, and speak of it as comprising any threat of violence, or any threat involving interference with the liveli- hood or the means of subsistence of the person threatened, in the hope of preventing him from doing what he has a right to do, or to make him do what he has a right not to do, the definition would be at once too wide and too narrow ; it would render punishable some acts which might be perfectly justifi- able, and would certainly fail to include some acts which are perfectly unjustifiable. The statement of a labourer to an employer that without higher wages he would work no more for him, and would try to persuade every other labourer that the wages offered were too low, and were likely to cheapen labour in the market to a disastrous point, is a perfectly legitimate state- ment, and one that any labourer ought to have the power to make; and yet it is unquestionable that such a declaration might very seriously threaten the livelihood of the employer to whom it was made. On the other hand, such a definition as we have suggested above would not cover the inclusion of a man's name in a published "black list" of persons with whom it was con- sidered by a given organisation (say, the Land League), that it was disgraceful to hold any sort of social intercourse ; and yet the publication of a man's name in such a black list, even though it were expressly stated that no violence and no refusal of the ordinary means of subsistence to those included in it was intended or recommended, would probably be an infinitely worse calamity than any attempt to organise a strike against an em- ployer till he raised his rate of wages, could be. The truth is that the character of intimidation depends so much on the minuter social circumstances of the day, that it is impossible to define it exhaustively, without great danger both of including what ought to be excluded, and of excluding what ought to be in- cluded; and we do not, therefore, in the least blame the Government for insisting that they cannot, and will not, supply a definition, though it is their intention to put down the sort of intimidation which has generally gone under the name of "Boycotting," a form of intimidation which has, no doubt, often involved much more cruelty and terrorism than the milder forms of violence, like stone-throwing or hooting, could have involved.

On the other hand, we cannot in any way reproach the Irish party for objecting that in relation to an offence which is to be judged by such judges as the Resident Magistrates of Ireland, there is a very great danger, indeed, in leaving the character of the offence undefined. Say what we will, the Resident Magistrates of Ireland belong to a caste who feel very little sympathy with the people ; they are not highly- trained lawyers ; they are not, as a rule, persona of judicial mind ; and they are pretty certain, without intend- ing it, to strain the interpretation of an ill-defined offence in a manner that may prove exceedingly injurious to the right of political combination. Under these circumstances, we cannot condemn them for resisting tenaciously, and even obstin- ately, till they secure for the Irish people that right of legiti- mate combination which was secured for the English artisans by the Act of 1875.

It seems to us that there is probably a way out of the difficulty. We believe that though it is impossible so to define intimidation as to cover all the offences which the Government wish to put down, it might be easy to define those rights of legitimate combination which it is absolutely necessary for the Irish people to maintain. Why not, after explaining and illustrating the nature of the offence, add something distinctly explaining what the Act is not intended to forbid or render punishable ? If we suggest words, it is not, of course, that we are prepared to defend them as adequate words, but only that we may make clearer the mode in which we would prevent the Bill from going beyond its true object. The words might be something of this kind,—" Provided always, and it is hereby expressly de- clared, that nothing in the foregoing clause shall be taken as declaring illegal, or prohibiting as eriminal, any agreement amongst tenants to stand by each other in demanding a reduc- tion of rent, or any effort to persuade others, by fair argument, to demand such a reduction ; or any agreement amongst labourers to stand by each other in the demand for a rise of wages, or for more convenient conditions of labour, or any effort to persuade other labourers to second them ; or any political combination to co-operate in bringing about a given political object by legitimate moral pressure, so long as that moral pressure is not calculated to excite others, either directly or indirectly, to hold their opponents up to public odium and hatred for resisting the pressure put on them." We do not for a moment pretend, of course, that such language as this is scientifically sufficient for its purpose. But we believe that the difficulty would be better met by explaining distinctly the sort of combinations which it is not intended to discourage or prevent, and which the Act would require the Resident Magistrates of Ireland to consider as perfectly lawful, than by any attempt to define all the forms of intimidation which it is desired to prevent, and which the Act is intended to. punish. With such a class of Judges as the Resident Magistrates of Ire- land, it is most important to be perfectly explicit in setting before them what they are not to construe as intimidation. And in that case, as an appeal is apparently to be allowed from their judgment, they are pretty certain to take care not to punish as intimidation the sort of combinations which the Court of Appeal might declare that the Act was intended expressly to sanction. Hitherto, as we think, both the Government and the Irish party have been in the right in refusing to give way. But we believe that if, instead of attempting to define intimidation, the Bill were to attempt to describe what is not to be regarded as intimidation, some approximation between the views of the Government and the views of the moderate Liberals and moderate Irishmen, might really be effected.